Any novel set in New York City, whether historical or contemporary, stands a good chance of catching my eye but two things in particular attracted me to Karl Taro Greenfeld’s first novel Triburbia: the chance to discover Tribeca, a neighbourhood I know only very superficially, and an interest in novels which tell the same events from the perspective of different characters, in this case a group of affluent fathers who meet each morning after the school run.  Karl Taro Greenfeld is both an established non-fiction writer and the author of acclaimed memoir Boy Alone, about his autistic brother Noah.  He was born in Japan and has lived in LA, Paris, Hong Kong, Tokyo and currently, Tribeca.  I’m very pleased he is joining me today on the Literary Sofa to share the literary inspiration for his own ‘Novel-in-Stories’: (my mini-review follows)

Before I wrote Triburbia, my novel-in-stories set in the Tribeca neighborhood of Manhattan, I had always read and enjoyed linked collections of stories. At their best, they reminded me of the Disney short film “Nature’s Half Acre”, in which a tiny meadow is observed by time-lapse camera and micro-photography over the course of four seasons and we get to see all these changes, particularly among the plants and insects, that the naked eye would never normally detect. (When a mouse or a rabbit shows up in that film, it’s a big fucking deal.) That was my goal when I was writing Triburbia—I wanted to illuminate this one little ecosystem—and I often looked to and thought about these collections of linked stories as I wrote Triburbia.

The Wanderers by Richard Price

This 1974 collection of stories by the author of Clockers is both a multi-perspective rendering of the Bronx, circa 1963, but also a great coming of age book. Price deftly dips in and out of the lives of a group of gang members, the eponymous Wanderers, with each story related to those that came before but also standing alone. Price was just 24 when he wrote this, and masterfully conveys the confusion, anxieties and violence of boys becoming men.

The Imperfectionists by Tom Rachman

The fictional Rome newspaper where this collection is set reminds me of some of my old journalist postings and will be instantly familiar to any reporter or editor who has lived the expat life. Rachman skillfully interweaves the stores by providing italicized interludes that give the history of the paper and serve as a contextualizing text that firmly locates the characters in the novel’s emotional and financial webs. This book has surprising pathos amid steady humor.

A Hollywood Education: Tales of Movie Dreams and Easy Money by David Freeman

Freeman, a former magazine writer turned screenwriter, came west during the early 80s and wrote this collection of ripping yarns about show biz. Each story in the collection is accretive, the dead pan tales of coke crazed producers, needy starlets and, of course, neurotic screenwriters, adding up to a kaleidoscopic view not just of Hollywood, but of American culture itself.

The Delicate Prey by Paul Bowles

Haunting and terrifying, this book of short stories has as its central theme a kind of anti-globalization as it explores the horrible consequences of inter-cultural clashes. In the title story, a tribesman is emasculated, dressed in a gown with tin-can tops hanging from it so that it jangles as he moves and forced to perform as a kind of eunuch dancer for a rival, brutal nomadic tribe. The stories are linked more by barbarism than location or character, and left me with the wary impression that as I traveled, I was equally likely to end up in the village in Hostel as in a Club Med..

Published in 1919 and sub-titled “A Group of Tales of Ohio Small-town Life”, Winesberg, Ohio exposed the desperation and loneliness of so many of the residents of a small, mid-American town. It was among the first books to take on what would become a central theme in American literature, rendering a kind of proto-suburban angst that would be taken up by Updike, Cheever, Franzen, etc.

This is among the Nobel-prize winning Egyptian writer’s lesser works yet it powerfully evokes post-WW II Cairo with memorable characters all living on one Cairo alley. Published in Arabic in 1947, Midaq Alley’s English translation evoked Dickens at his most squalid as we are introduced to hash dealers, a cut-rate dentist who steals teeth from cadavers, and a character called The Cripple Maker who breaks children’s legs with a brick so that they may beg more effectively.

The Girls’ Guide to Hunting and Fishing by Melissa Bank

The book that launched chick lit here in the US—or at least was partially responsible along with Helen Fielding’s Bridget Jones’s Diary—A Girls’ Guide is a great read for dudes as well. These linked stories came out in 1999 are set in NYC and while they cover similar terrain as Candace Bushnell did in her Sex and the City Columns, Bank wrote about being young and looking for love with an earnestness and pathos that gave her characters greater depth and empathy.

This book felt to me like the inverse of Raymond Carver’s desperate white males living in drunken, suburban squalor and betrayed by America’s industrial decline. The characters in Wrecking Yard, on the other hand, feel like they are a half-generation or less removed from living in caves and have been bypassed by the entire industrial revolution. There is a hill-billy savagery to this book that feels as illuminating of the darker parts of America’s soul as anything Carver wrote.

These stories set in Havana during the early 90s all focus on one central character, Pedro Juan, who romps through a series of loosely connected vignettes that primarily involve marijuana and copulation. The narrator goes from odd job to odd job, at one point selling human livers to state run restaurants. The book shines light on what even back then was already a society in decay and crisis, yet never loses its humanity or sense of humor.

Benya Krik, the Jewish gangster at the center of these stories of life in Odessa’s Jewish ghetto before the Russian Revolution, was a literary mobster ahead of his time as he was written with all the humanity, love of family and sly humor that would later make mafiosos such tele-and-cinema-genic figures in American pop-culture. The book weaves intense and specific narratives to produce a vivid picture of pre-revolutionary Russian life. 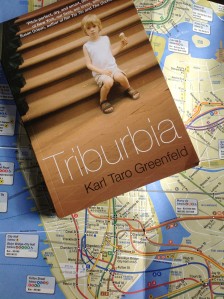 Thank you to Karl for introducing me, and no doubt many others, to these Novels-in-Stories – a really interesting and varied selection which I’m now keen to explore.

Have you read any of them?  Do you have a view on novels-in-stories?

In Brief:  My View of Triburbia

It’s a big challenge for a collection of interlinked stories to function as a novel and I find myself adjusting (which is not to say lowering) my expectations.  In Triburbia Greenfeld portrays the evolution of a neighbourhood and its people, a decadent bunch of characters whose sense of entitlement and egocentrism sets them apart – if he deals in stereotypes, he does so knowingly and with a deft satirical touch.  Even to an outsider, there is much here that is deliciously recognizable about New York.    This reminded me very much of Christos Tsiolkas’s The Slap and my feeling about it is similar:  the overall tone is very male, a little brash and at times unashamedly crass. The writing is engaging and often funny but also has the power to touch.  If you love or love to hate New York(ers) and are looking for a provocative and stimulating read, this is it.

If you are, or if you know, a self-published writer whose novel stands comparison with the best of what’s out there, watch this space…