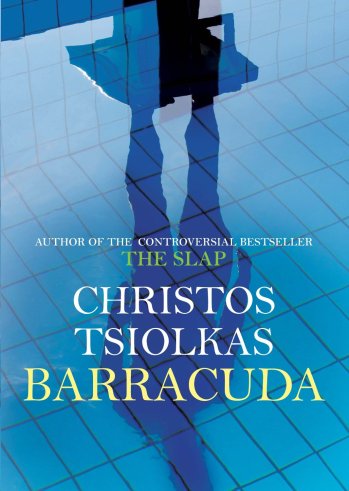 I think it would be reasonable to describe The Slap, the controversial global bestseller by Greek-Australian Christos Tsiolkas, as a hard act to follow. Five years on his latest book Barracuda has been greeted with commensurate interest and expectation. Somehow Tsiolkas manages to deliver more of the same – it’s just as provocative – but with a very different result, which gives it an equal chance of finding favour with those who liked and those who passionately hated The Slap.

With these latest two books Tsiolkas has established himself as a novelist able to handle serious ideas in a format that will actually sell: Barracuda touches on issues of social class, racism, national identity, right and wrong. The protagonist and would-be Dickensian ‘hero of his own life’ is gifted swimmer Daniel Kelly, a working-class ‘wog’ (meaning Greek – although his father is of Scottish origin) who wins a sports scholarship to a private school in an affluent area of Melbourne. It is 1994 and his sights are firmly set on representing Australia in the 2000 Sydney Olympics. We know even before opening the cover that it’s not going to happen. That’s not intuition. It’s in the blurb.

If ostensibly The Slap has the more relatable premise of the two books (a social situation to which almost anyone would have some kind of instinctive response), this is less of a problem for Barracuda than it first appears if you’re not a sports fan. Just as Chad Harbach’s The Art of Fielding wasn’t really about baseball, here swimming is an illustration of the drive, sacrifice and ruthless focus that go with an all-consuming desire to succeed – and how it feels to fail. It’s about someone coming to terms with who he is and the life he has when neither are what he planned, and that makes it a very compassionate and engaging read.

This is Daniel Kelly’s story, his perspective alone, and the inside of his head is an uncomfortable place to be. He certainly has enough disagreeable traits to satisfy (or vindicate) those who have come to expect that from Tsiolkas, including a massive chip on his shoulder which for a long time prevents him seeing that he has prejudices against the ‘golden boys’ just as they do against him. What matters is whether the reader buys into the transformation between the young Danny, the arrogant and egocentric psycho fixated on winning, and the more mature Dan who realises it is not only his failure which defines him in other people’s eyes but what he did next, when he ended up on the wrong side of the law.

The interplay between the Danny/Dan narrative voices/timeframes is what makes this novel work: the character development, pacing and suspense all depend on it. The book begins, surprisingly, in Scotland with Dan stripping off on the banks of Loch Lomond:

It’s an opening that instantly sparks curiosity about what exactly went wrong and the suspense is ramped up throughout the first part Breathing In cumulating in the answer to that question. Breathing Out is a denouement which feels like the literal opposite – where the main thrust of the story is about someone going to pieces, the resolution is about putting them together again.

But there’s nothing saccharine or feel-good about this tale of redemption and self-discovery. It’s hard won for Dan Kelly and no easy ride for the reader. As before, Tsiolkas seems to delight in erecting obstacles: one is the unusual and sometimes confusing chronology which both demands and rewards concentration, a much bigger issue is the author’s trademark brashness/crudeness/vulgarity – what you call it comes down to how you view such things.

For me, Tsiolkas’ writing has a uniquely in your face quality that is very refreshing. I don’t get the impression that he censors himself in any way (if he does, it would be fascinating to know where he draws the line). That rawness is very exposing and very powerful. It is also risky – many find it off-putting. If you find yourself cringing at the moniker Cunts College, you’ll be doing it a lot as it crops up throughout the book. I found that gratuitous, but not the (few) explicit sex scenes between men nor the many and varied masturbation scenes, one of which is accompanied by a rather startling rumination on whether women find penetration painful Or is it just in sodomy that pleasure and pain are so linked, so inextricable? It’s a relief that this novel doesn’t feature the excruciating straight sex scenes which attracted so much revulsion in The Slap.

Barracuda is a compelling story which pulled me in and kept me there – the 500 pages flew past. I cared about Dan precisely because he is flawed and messed up. There were several heart-in-mouth moments where I willed him not to be such a raging idiot, and many heart-spearing episodes, such as when he’s watching the opening ceremony of the Sydney Olympics:

Dan would never forget that moment. It was impossible to him just then to conceive of a way to mitigate such loss. He should have been there. He had been holding his future in his clasped hands. Dust. It is all dust.

I had the fortune to meet Christos Tsiolkas this week at the UK launch of Barracuda and we talked briefly about some of the points I’ve raised here. He is a very gentle, friendly and humble person, genuinely interested in readers’ honest opinions.  This is mine.

Have you read Barracuda or The Slap? Does your response to one book affect your readiness to read another by the same author?

Novelist and short story writer based in London. Debut novel PARIS MON AMOUR now out in digital and audio, paperback on 22 May 2017. Host of the Literary Sofa blog.
View all posts by Isabel Costello »
« My First Five Years as a Writer
The Likeable Characters Debate – Apple Tree Yard & The Woman Upstairs »