My Summer Reads selection is always the high point of the year on the Sofa and I was delighted that it was greeted with so much enthusiasm two weeks ago  – thanks to all concerned.  As mentioned, there will be a smaller follow-up of 6-8 titles in late July but today it’s time to kick off what promises to be a superb guest author programme featuring Justin Myers, Amanda Huggins, Sarah Leipciger, Jane Johnson and today’s guest, writer and actor Dugald Bruce-Lockhart.

Although it wasn’t planned this way, after months of lockdown and with very serious issues still at stake it’s good to start with an entertaining novel with a strong sense of place. Dugald’s debut The Lizard is certainly that, as you can tell from my review below.  I’m very pleased to welcome him with a Writers on Location piece on the Greek island of Paros that’s not just a trip, but a trip back in time (look how much surfboards have come on)…

After A-Levels in 1986, I left the UK for a month’s Interrailing with three school pals, hell-bent on ‘doing the Greek Islands’ – the holy grail and rite of passage for every self-respecting public-school detainee looking to shake off the rigours of boarding school (second only, perhaps, to the all-important Gap Year in Australia). Embarrassingly, we never made it.

A forty-eight-hour vigil on a stifling broken-down train in the depths of a Yugoslavian sunflower field took our eye off the ball. And when we finally crossed over onto Greek soil, desperate to get into our Bermuda Shorts, we tumbled out at the seaside town of Volos and headed to the nearest municipal beach, where we got hammered on cheap Metaxa and subsequently found ourselves sitting out the remaining four weeks at a local campsite (a torrid affair perched upon an urchin-infested slab of concrete beach), smoking Marlboro Reds and ogling the local girls from a safe distance, convincing ourselves we were living the dream, as we numbed reality with incessant shots of Tequila. Greece – 1; England – nil.

And yet, in the summer holidays of 1988, when I left behind the windswept cobbled streets and tea shops of St Andrews University on my solo quest for the sun-bleached sands of the Mediterranean, it wasn’t for the lure of cheap booze and sex – I went in search of a little headspace. Some well-earned me time. Okay, to come clean: I’d taken too long to commit to a whale watching holiday in Puget Sound with my then girlfriend, and by the time I’d decided in favour, she had wisely changed her mind – at which point I discovered that all my friends had also made other arrangements for the summer. Nonetheless, I saw it as an opportunity. A chance to settle the score. I’d do the Greek Islands – and this time I’d do it right.

For a start, I had an actual destination in mind: Paros in the Cyclades (as recommended by a colleague from my Moral Philosophy class); secondly, I was flying solo. No one else to call the shots – or indeed, to challenge me to drinking contests. At least, that’s what I thought.

Of course, there were teething problems. I remember stepping off the ferry utterly blinded by the whiteness of everything – knowing I could never allow myself to buy anything as frivolous as sunglasses – then staggering to the Parikia end of Livadia beach before plonking myself down onto the marginally cooler, shaded sand beneath a Tamarisk, thinking ‘now what?’

There I was in my plimsolls, my army-surplus backpack, tacky Adidas shorts and a splitting headache from the diesel fumes of the ferry, realising that if I wanted to go for a swim, I’d have to ask the nearest sunbather to watch over my stuff. Every time. Could I trust anyone with my passport? My travellers’ cheques? What the fuck was I doing on a Greek island on my own? And this was 1988. No buttons to click, no screens to swipe. Just me and whatever came out of my mouth.

Just a few hours later, things took a turn for the better when I met a Scottish traveller who was taking an evening dip at the far end of the beach – a ‘worker’ (as we non-tourists liked to called ourselves) who was painting rooftops at a hotel in Piso Livadi on the eastern side of the island. He gave me the lowdown and said he’d try to secure me a job on a building site. I was to report in the following evening at the Koula Campsite café terrace where the workers assembled, and he’d see what he could come up with. That night, I slept on a mosquito-ridden forecourt and in the morning, having been awoken and then chased off the premises by a yia yia (a Greek granny) armed with a broom, I felt I could do this after all. 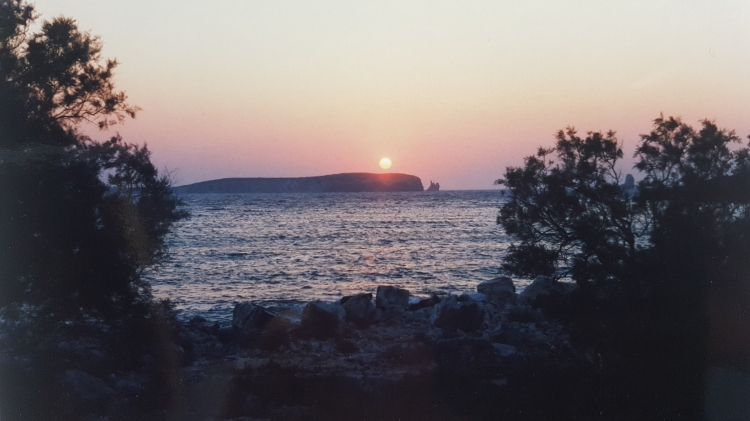 And I was right. Over the next few weeks I joined the workforce of Aussies, Irish and Brits and became a ‘local’. I wasn’t to know, of course, that I’d end up being chased off the island by the police; or that I’d OD on diet pills called Ponderols (you were supposed to take one a week, but my Liverpool crew persuaded me to pop five in one go); or indeed that I’d spend the night being chased around the backstreets of Parikia by knife-wielding Turkish students.

But my experiences weren’t in vain. Thirty years later, memories of that fretful, hot summer have resulted in the birth of my debut novel, The Lizard. I can finally say I’ve done the Greek islands. And I’ll be doing them again in the sequel, Second Skin. But that’s another story.

Many thanks to Dugald for this lively start to the summer guest author programme. I’m guessing anyone contemplating a holiday this year will be hoping for something a bit less eventful… 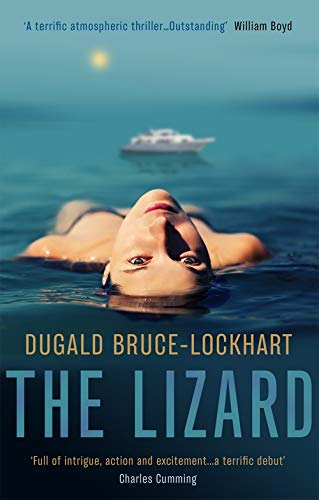 IN BRIEF: My View of The Lizard

It wouldn’t be in the spirit of this book or my response to kill it by analysis and I’m no expert in thrillers but what we want from our  reading at any given moment can vary a lot. I’ve heard from many people lately whose tastes, habits (and ability to read at all) have changed as much as everything else in the last few months.  I can’t  comment on The Lizard in that context because I read it back in the depths of winter but I do think it has qualities that mark it out as a great summer read: a high-octane, hedonistic romp with little regard for boundaries of any kind.  If the real world feels too much, this pacy entertaining adventure will whisk you to Greece (and some gorgeous swimming pools, sigh) with minimum inconvenience. Suspension of disbelief could come in handy, although the author’s account of his time on Paros suggests it’s not as essential as I thought; as he veers between haplessness and ingenuity having apparently mislaid his moral compass along the way it’s interesting to see where, if anywhere, protagonist Alistair Haston draws the line.

Next week’s Writer on Location will be Jane Johnson with a post on Cornwall, her home county and setting of The Sea Gate.