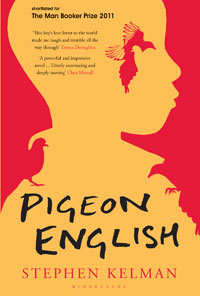 For once, my book group didn’t take issue with the novel which won the Booker prize this year, but when we decided to read one from the shortlist, Pigeon English was the unamimous choice even though I don’t think any of us was actually looking forward to it.   Debut author Stephen Kelman’s impetus to write this novel came from the murder in 2000 of 10 year old Damilola Taylor.  Pigeon English is the story of 11 year old Harrison Opuku who has arrived from Ghana with his midwife mother and 14 year old sister Lydia to live in a grim tower block in an unnamed part of London, leaving his father and baby sister behind.  When an older boy he knows only slightly is stabbed to death for his fried chicken, Harrison sets out to catch the killer with the help of his friends.

This is a first person narrative in Harrison’s distinctive voice.  To me, he often sounded younger than 11, but I put that down to cultural shock as he adjusts to the differences between rural Ghana and an inner city area where gangs, drugs and violence are part of everyday life.  He is equally fascinated with local gang members X-Fire and Killa and a pigeon which regularly visits the tiny balcony of his flat.  At the time of writing the novel, Stephen Kelman was still living on the deprived estate in Luton where he grew up and it shows in the convincing bleakness of the picture he paints.  Harrison represents goodness in the book but the reader wonders how long he can steer clear of the gangs, given the pressure to fit in.

Thankfully, the bleakness is mitigated by many sweet and funny moments.  We share Harri’s wide-eyed wonder at a science experiment where a row of lemons lights a bulb. When one of his much more streetwise friends asks him what his favourite gun is, he names a fancy water pistol.  He is bemused by many aspects of UK life, such as keeping house plants and not being able to eat fruit from trees.  He’s forever saying that something is ‘the funniest thing I’ve ever seen.’  I loved the way he and his family speak.  My own favourite was the rebuke, ‘Advise yourself!’  But Harri’s memories of Ghana, such as the skeletons of twin babies who are considered evil, make it very clear that life there has a dark side of its own.

Each of the chapters represents a month from March, when the murder took place, to the end of term in July, when Harrison hopes to beat off the competition to be the fastest runner in Year 7.  It is not very plot-driven, and the main interest lies with Harri’s character and perceptions.  To some extent the usual limitations of a first person child narrator apply, but in fact the author exploits this very skilfully.  One of the reasons Pigeon English is so hard-hitting is precisely the gap between Harrison’s innocence and the reader’s sickening sense of the deadly seriousness of what he is getting himself into.  When we discussed the novel, none of us felt the italicised paragraphs in the pigeon’s point of view worked.  Written in a very different style, we found them odd and distracting, but they didn’t appear often enough to be a big problem.

When I was halfway through Pigeon English, this article appeared in The Guardian.

“No time for novels – should we ditch fiction in times of crisis?

When our daily news is apocalyptic, it’s irresponsible to read made-up stories. It’s time to start reading the serious stuff instead”.

I sighed, partly in frustration, and partly out of boredom, because we’ve heard it all before from people wanting to sound intellectual.  ‘Made-up stories?’  Let’s have a think about that.  Where do most writers get their ideas?  The essence of good fiction (I’m talking literary and commercial here, not fantasy, etc) is its truth to life.  That’s how authors create believable characters readers care about, and conflicts and situations they can relate to.  Take the universal themes in the economic crisis alone – ambition, idealism, greed, downfall – and you have the inspiration for many great works from Macbeth to Of Mice and Men.  So I really don’t think we need to worry that readers (yes, even Guardian readers) will be abandoning fiction in droves in favour of books about the Eurozone crisis.

In my book group, Pigeon English provoked one of the strongest emotional responses of anything we have read, and not only because we are parents and live in London.  Stephen Kelman has done more than write a frighteningly realistic novel; he has written a book that matters and has the power to educate, to make people think.  It wouldn’t surprise me if the paperback is marketed as a crossover title. The author says he’d be happy if it gets a few more kids reading, but I hope Pigeon English makes it onto the secondary school curriculum where it can make the biggest impact.

And to anyone who’s given up on fiction because they believe it doesn’t reflect social reality, I recommend that you read Pigeon English.  It may just make you change your mind.

This week the Metropolitan Police launched a campaign aimed at teenagers from 13 to 15 warning of the consequences of carrying weapons.  The YouTube interactive film is called Choose A Different Ending.