//
you're reading...
Places, Writers on Location

Two Weeks in the Canadian Rockies and NW Montana

There’s nothing like mountains, or any vast natural landscape formed millions of years ago, to remind us humans how tiny and temporary we are.  When you look at it that way, our trip to the Canadian Rockies and north-western corner of Montana wasn’t as long ago as it feels (back at the beginning of my summer blog shutdown).  We were away 15 nights,  all but 5 in Canada, but Glacier National Park in the US was the inspiration for the trip.  The Going-to-the-Sun Road which crosses this national park and the Continental Divide is rated among the World’s Most Scenic and had been on my husband’s bucket list for some time as one he wanted to cycle   As it’s an 8 hour drive from the nearest American international airport (Seattle) and we didn’t want to spend time on that or on internal flights, I came up with a circular itinerary in and out of Calgary which is only 5 hours by road and located right at the edge of the Canadian Rockies, on many people’s bucket list for good reason!

This was the first trip we’d made without our eldest son, who followed his year in Senegal with a 6 week trip round four more African countries.  Luckily our good-natured 17-year old had no problem spending two weeks with mum and dad, and the daily virtual swap of dramatically different photos kept us all connected.  Apart from a couple of nights in Calgary at the beginning and end – a nice laid-back city – this was all about the great outdoors and our need to get away from it all.  That didn’t entirely work as it wasn’t an escape from the crowds.  The summer season is short, with snow and ice often closing roads and mountain passes until early June and from mid October.  We were there in the summer peak amongst peaks, which called for tedious strategising on a daily basis and a lot more early rising than I like – if you have the option of June or September, seize it!

The biggest headache was that car parks fill up ridiculously early at the most famous sights and at trailheads – our greatest coup was near Lake Louise.  Exploiting jetlag the day after flying in, we got up at 4.45 and bagged the last parking spot at 5.30 (!) to watch the sunrise at Moraine Lake (top photo).  This is justly regarded as one of Canada’s most breath-taking views – it spent 10 years on the $20 bill – and although it was no doubt partly relief that we’d pulled it off, I was overcome with emotion at the beauty of it and was on a (very tired) high for the rest of the day which we spent driving a stretch of the Icefields Parkway – another of the Most Scenic Drives.  It’s a normal multi-lane highway which cuts through a panorama of stunning mountains, glaciers and lakes everywhere you look, including Peyto Lake pictured below.  The surreal turquoise colour of these lakes is caused by the deposits in glacier meltwater.

We stayed 5 nights in an Airbnb in Canmore, a lovely small town which is cheaper and far quieter than the nearby tourist hub of Banff and a perfect base for hiking, which we did every day of the trip.  Not surprisingly given the terrain, people up for technical vertiginous day hikes have the greatest choice and that’s not us.  Canadians clearly have a different take on the meaning of ‘moderate’– it’s a good idea to read reviews to get a detailed idea of what’s involved as the net elevation gain/loss stats can conceal a heck of a lot of ups and downs.  The high 20s/low 30s temperatures are not usual at this altitude – they’re on the up here like everywhere else – and were not ideal for strenuous physical activity.  There’s no cellphone reception away from the towns and you’re constantly reminded that human + wilderness = risky, demanding precautions and common sense: litres of water, bug spray, sunscreen, snacks, bear (pepper) spray, not hiking alone.  The strong chance of meeting black bears who need to feed their young in summer worried me but we didn’t see any.  The rewards are worth it – if you walk more than a kilometre the crowds dwindle, an extraordinary sense of tranquillity sets in and it’s very uplifting and restorative.  My favourite hike was a 4 hour beyond Johnston’s Canyon to the so-called Inkpots – a group of perfectly clear pools of different shades of turquoise, surrounded by mountains. I’ve put a few of my Canada highlights in this gallery – it’s pretty photogenic… 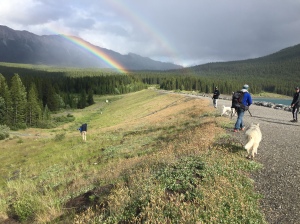 On the way down to Montana we spent two nights in Fernie, a gorgeous little town in the bottom corner of British Columbia with an Old West style main street straight out of a movie set (it’s been one).  These are the Kootenay Rockies, which I knew from reading the brilliant D W Wilson and it was great to get off the ‘unmissable highlights’ trail for a while, even if it did involve a nerve-wracking drive over 100km on a gravel road to get there.  We’d only been to Canada very briefly twice before (Vancouver and Montreal) and we loved it – in summer, that is.  The people were so helpful and genuinely interested in visitors – we had great chats with the locals everywhere we went.

When we got to the States for the final leg, Glacier National Park (picture gallery at the end) lived up to the hype.  We spent 3 nights on the more populated western side in Columbia Falls where everything is available at a sensible price.  The opposite is true of the more remote eastern side where we spent 2 nights – without JC’s biking plans this wouldn’t have been necessary as you can drive the 50 mile Going-to-the-Sun Road both directions in a day, and what a road it is.  Glacier National Park was founded in 1910 due to railways opening up the west and in 1932 the road opened due to the increase in car travel.  It’s an incredible feat of engineering and one of the hardest roads in the USA to snowplow every spring.  In depressingly familiar fashion, it is at least acknowledged that this came at great cost to the Blackfoot Nation and other indigenous groups – the narrow, windy road takes its name from and is carved into a mountain they consider sacred.  This place is a prime example of the conflict between mass tourism and the natural environment: on one hand it’s being protected but all of us who’d driven or taken flights to be there were contributing to its decline. It’s predicted that by 2030 the last named glacier in Glacier NP will have disappeared – I found that very sad and more than anywhere I’ve ever been, this trip brought it home to me that travel is both a privilege and a responsibility.

When I wasn’t yomping up mountains contemplating the irreconcilable dilemmas of the planet, I was of course, reading (and getting story ideas).  Come back next week for a round-up of the month I spent reading only Canadian fiction – they sure make good use of those long winters. 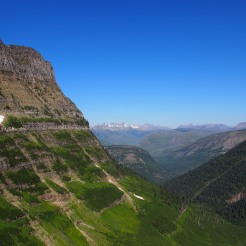 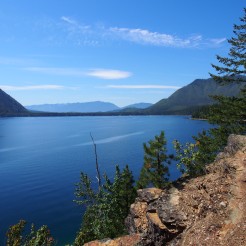 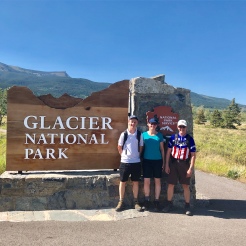 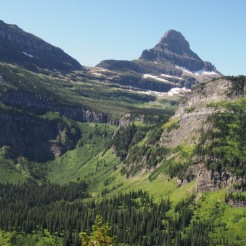 Novelist and short story writer based in London. Debut novel PARIS MON AMOUR now out in digital and audio, paperback on 22 May 2017. Host of the Literary Sofa blog.
View all posts by Isabel Costello »
« Autumn 2019 on the Literary Sofa
A Month of Canadian Fiction »