Let’s all talk about GONE GIRL 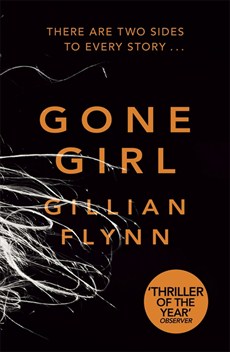 Gillian Flynn’s Gone Girl isn’t the kind of book I read very often, and this isn’t going to be one of the reviews which take me six hours to write.  I thought I’d write a blogpost because each of the three times I mentioned the novel on Twitter, there was a flood of replies from people dying to discuss it, and Twitter isn’t the best place.  So let’s do it like this:  I say what I think, and you say what you think.  It worked out well the last time I did an ‘unofficial’ review (Taking no Prisoners – My View of Fifty Shades of Grey).

I follow the book market closely, so of course I’m interested in titles which sell by the million (even if it depresses me about the prospects for my own novel).  In the end I tend not to like them, but that may be because I get so bored of books that are overhyped before I’ve even picked them up.  Sometimes you almost feel you’ve read the damn thing already.  Often, hype raises impossible expectations that can only lead to disappointment.

Starting with my preconceptions: I was aware that Gone Girl is a Marmite book and that it contains a lot of audacious twists.  I knew it was the story of a missing wife and a marriage gone wrong. Several friends had said they thought I’d hate it based on what they know of my taste in books.  Although they were too polite to say it, I bet they were also thinking and because you’re so critical and incapable of just reading anything like a normal person. In general, that’s true, but when I’m reading something very different to my normal choices and especially if it’s nothing like anything I’d ever write, I do find it easier to read for entertainment. The clincher was when my friend and writing partner Kristin Celms bought me a copy saying she’d enjoyed it and thought I might too.

Kristin was right – I liked it more than I expected to.  I’m going to have to be cryptic in case you haven’t read it and hope you get what I mean if you have.  I have a horror of book blurbs (I almost always rewrite them for my reviews) which ruin the plot or give a completely false impression of the novel, but Gone Girl has a good blurb and a good teaser:

There are two sides to every story .

Or, in the words of a lawyer speaking of protagonists Nick and Amy Dunne:

I can’t not comment on the writing.  At first I thought the style was going to defeat me.  It’s very irritating, especially in the first half – jokey and twee:

Tra and la!  I am smiling a big adopted-orphan smile as I write this.  I am embarrassed at how happy I am , like some Technicolor comic of a teenage girl talking on the phone with my hair in a ponytail, the bubble above my head saying ‘I met a BOY!’

This is from one of Amy’s diary entries, and she’s not a teenage girl, but a woman of nearly 30.  Elsewhere the tone changes: it is dark and gripping but frequently vulgar and unpleasant.  An elderly woman is described twice as having a ‘vaginal’ smell and there’s a lot of the C word, which I found in bad taste.  It’s almost 500 pages long and about a quarter could have been shaved off to great effect by being less wordy.  Example:  My wife was crazy.  I was married to a crazy woman.  You get the idea.

Reading that back, it sounds quite critical, so what did I like about it?  It reminded me of the way I used to enjoy early John Grisham thrillers; I was pulled into the story and looked forward to getting back to it.  I hadn’t come across this structure and set-up before so it felt fresh.  The novel is very cleverly plotted and the notorious twist halfway is of a kind that’s made me rant and rage with some other books.  But although it worked, after that, for me the stakes were lowered (and you will only understand if you’ve read it).

If you like your characters likeable, you won’t like this book.  I was unhealthily drawn into just how depraved and awful both Nick and Amy are and the lengths they go to, but it’s a risky strategy when the reader doesn’t sympathise with either protagonist.  The use of secondary characters was good:  Amy’s parents, Nick’s twin sister Go (Margo would have done fine), the detectives, the lawyers and various others contributed a lot of interest to the story.   I could really picture the couple’s preppy-journo New York life and Nick’s miserable, economically-depressed Midwestern hometown with its abandoned mall, where they move after losing their jobs.

The picture of marriage is a depressing one (I wouldn’t recommend this to anyone having relationship problems) and without getting too heavy about it, the book plays massively to stereotypes of the pathetic, spineless husband who just can’t help himself and who’ll do anything to keep his woman quiet and the conniving,  manipulative bitch who pulls the strings.

The events of the second half were increasingly unbelievable (one character seemed to exist purely to serve the plot) and I found the ending – when it finally arrived – a real cop-out which relied on something which made no sense early in the story.  I read that the author stalled at the 82% mark when writing it and it showed.

Well, I’m glad I read Gone Girl – it’s definitely got something.  I know a lot of you have read it and I can’t wait to hear what you thought, whether you loved or hated it.  IF YOU HAVEN’T READ IT YET and want to comment, you may prefer to scroll straight to the end of the comments to avoid seeing borderline spoilers.  I want everyone to be able to have their say.

If you’re looking for a new read to really get under your skin, get very excited about Kiss Me First by Lottie Moggach  – one of my Top 10 Summer Reads, out on 4 July – and while you’re here, please check out yesterday’s Family Snapshots post and nominate your favourite fictional family novel to win signed story collections.  You can even pick the Dunnes if you like!

Novelist and short story writer based in London. Debut novel PARIS MON AMOUR now out in digital and audio, paperback on 22 May 2017. Host of the Literary Sofa blog.
View all posts by Isabel Costello »
« Short Fiction: Family Snapshots eBook Singles
XX or XY? Do readers care about gender of author? »

47 thoughts on “Let’s all talk about GONE GIRL”