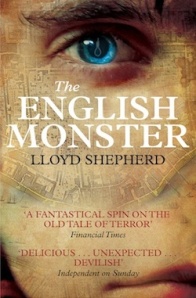 I’ve never been drawn to historical fiction, probably because I hated history at school and gave it up at the earliest opportunity.  But in fact, some of the novels I love definitely fall into this category:  anything by Sarah Waters; John Harding’s Florence & Giles set in Victorian era New England which was one of my favourite reads last year; Tracy Chevalier’s Remarkable Creatures, set in Dorset in 1810, and there is of course the small matter of the Classics…

I was getting closer to my true position in my post  Being Selective – How do you choose which books to read? when I said that a novel with a historical setting works for me if the story is strong enough.  All I can do is judge it on its literary merits, of which The English Monster, Lloyd Shepherd’s debut novel and the third of my  Fiction Hot Picks for 2012 has many.

First things first:  it has one of the best opening chapters (acting as a prologue) I’ve ever read. Two happy thoughts came to me immediately:  this man can really write and this is going to be exciting.  The English Monster has not one but two strong stories.  The main story, which acts as the novel’s framework, is narrated chronologically starting in late 1811 and tells of the real-life brutal Ratcliffe Highway murders in the East End of London.  The earlier story is that of Billy Ablass, an ambitious young man who sets out from Plymouth in 1564 to seek his fortune on the high seas aboard the Jesus of Lübeck, owned by Queen Elizabeth I.  The reader wonders how the two will intertwine; the answer is in an extraordinary combination of meticulous historical research and riotous imagination on the part of the author.

The 1811 plotline has many of the ingredients of a modern-day murder mystery:  two sets of gruesome and apparently motiveless multiple murders, many twists and some engaging characterisation in John Harriott, magistrate of the new Thames River Police, and his officer Charles Horton.  What was missing in 1811 was any established structure for the investigation of crimes; the prime purpose of law enforcement being prevention.   The brilliantly drawn Charles Horton possesses the then unfamiliar skill and mindset of a detective, and despite working in a climate of public terror over the killings and others’ shambolic failure to make any progress in finding the perpetrator, somehow we know that he will prevail.

Shepherd gives a superbly atmospheric depiction of Regency Wapping, where drunkenness and debauchery are a feature of everyday life (not unlike UK city centres at the weekend now, actually). The Ratcliffe Highway narrative is rich enough to have been a novel in its own right, but it is the interleaving of the other story, the Melancholy Transactions of William Ablass (the sub-title of the book) which takes it to a different and highly ambitious level.

For me the two strands worked equally well in different ways.  In the earlier story, Billy’s exotic sea voyages to Africa and the Caribbean are narrated with a vividness and vitality that puts it right up there with the best parts of Moby Dick.  The only obvious thing lacking here was a map.  Throughout, the language is just archaic enough to give a sense of period without being hard to read; the tone is warm, humorous and very entertaining.  In the end, I was even won over by the use of phonetic dialogue, which I usually find irritating.

There is no sense that this novel was written in the 21st century, and it is precisely the absence of modern context (although attitudes do change over the course of the novel) that makes the brutal realities of these sea-faring expeditions so shocking: human lives were being traded in Britain’s quest for power and commercial supremacy and anyone who disputed this on moral grounds or in defence of their own family or property could expect no mercy.  Lloyd Shepherd does not shy away from these unpalatable truths and it wouldn’t have worked if he had:

‘Pack the Africans in too tightly, and the contagions which were already leaping from slave to slave would jump ever more quickly. Pack them in too loosely, and there wouldn’t be enough Negroes to draw a profit […] Billy and Drake totted up the totals each morning, removing the Africans who had died during the night or looked close to death and having them thrown overboard.’

At the end of the novel is a helpful Author’s Note in which Shepherd makes clear which parts are fictitious; he sticks to the historical facts as closely as possible and I feel I learned a lot from reading it.

As a writer with a strong interest in structure, what impresses me most about The English Monster is the sheer ingenuity of what he achieves with the use of the earlier story.  The novel is divided into five ‘books’ (parts) of varying length, the 1811 story running throughout but Billy’s adventures separated into different… not quite sure how to put this…eras.  At the beginning of the second ‘book’ I briefly stopped enjoying the novel because I was confused by the chronology and worried that I was missing something – luckily I was put out of my misery before too long, but not before a string of surprises about Billy.  As well as some of the most spectacularly unpleasant violence I’ve come across, this novel delivered scenes of terrible poignancy and even uncomfortable eroticism.

The merging of the two stories is masterfully done and the ending is such that if I were inclined to bite my nails, there wouldn’t be much left of them.  On the basis of its appeal to lovers of historical and maritime fiction alone, I predict The English Monster will be a big hit; as for its ability to ‘turn’ readers like me who don’t normally like that kind of thing, well, that’s really something.

Writer (novels: Paris Mon Amour 2017; Scent 2021).Host of the Literary Sofa blog. Co-founder of Resilience for Writers with Voula Tsoflias. Perfume lover and Francophile.
View all posts by Isabel Costello »
« On Location: #3 Coney Island, Brooklyn
Book Titles – (Don’t) Call It What You Like »

9 thoughts on “Book Review – The English Monster by Lloyd Shepherd”