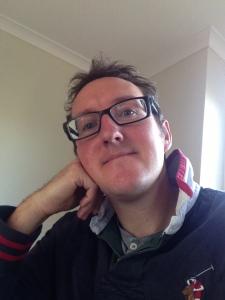 Today, for the first time, I’m delighted to welcome an as-yet-unpublished writer to the Literary Sofa. My guest is a popular and witty presence on Twitter and has livened up my day many, many times. Together we have plotted to take over the Vatican. We are engaged in an apostrophe war with no end in sight. Today it is my great pleasure to introduce Ben Blackman!

I’ve got to know many talented unpublished, as well as published writers through the blog, workshops, festivals and  Twitter. A hundred, at a rough guess. So how did I decide how not to upset 99 of them? The first answer is that Ben possesses the essential writerly quality of putting himself out there – he offered (well, showed a glimmer of interest which I seized upon). The second is that today’s guest post is about narrative non-fiction, a genre relatively few people write. I know very little about it – Ben knows a great deal. He has finished his first book and is hard at work on his second. I asked him to explain why he enjoys this type of writing:

Narrative Non-Fiction is a very difficult literary market to get into apparently, but then – what isn’t? I don’t think as many people write it as fiction and novels though so I’m glad it’s what I do. It seems like there’s more of a chance somehow. Well, there is for me, because I could never write fiction!

Whenever I read something somebody has completely made up I think – wow! How do they do that? Don’t get me wrong, I always think narrative non-fiction sounds a lot easier than it is. A lot of people assume the same. I will always remember the time I sat down to write my first book. I had planned it in my head for years, structured it on paper. I knew I had the material for it to make a good book and the ability to write the number of words required…

How do you start a book, never mind finish it? Get it all in the right order? When it’s 80,000+ words, it begins to get a little tricky. And that’s before you even consider trying to make it funny or good.

I didn’t read much growing up or watch many films (we didn’t have a video until I was sixteen, you see). For any kids reading, a video was a bit like Sky+, except completely rubbish. You could only video one thing at a time, and if you wanted to use the timer it took the length of the program you wanted to record to set the bloody thing! Worse, if the program changed time for some reason, tough! You’d recorded thirty minutes of a newsflash about a beached whale, instead of Ready Steady Cook (which your Dad had specifically asked you ‘not to bugger up, again.’)

Consequently, I don’t think the bit of my brain that’s meant to like sci-fi, fantasy, thrillers and all that stuff ever really got developed. This is probably why I tend to like reading what I call true(ish)-seeming fiction. Same for TV and film watching. Stories set in modern times with normal people in them. I love a good story but I can never buy into too much make-believe (Harry Potter aside). I’m a sucker for a good bit of chick lit (especially when set in the countryside, probably involving a ‘hunky’ gardener and ‘Jennifer’ who works in the city but has returned to visit her dying grandmother and has to stay in the village for the month…). You’ll take this bit out, Isabel, right?*

When I started reading it was often autobiographies: sporting, political, business people. Nobody ever believes me when I say James Dyson’s book is in my Top 10. Most importantly, I’ve read a lot of what I now know is called Narrative Non-Fiction. It must be why I started writing it. I love the fact anybody can write. It doesn’t cost you much, just time, and if you love it – well, that’s time well spent.

I was delighted to be asked to contribute to the Literary Sofa, or at least I was before my brief arrived: ‘Write something funny’. I always hope my writing is funny**, but if that is the sole aim then it’s always a daunting prospect.

I like to write about life and experiences. I’ve always seen the oddities in everyday life and not been afraid to tell people about the ridiculousness my days seem to bring up. Everybody encounters funny things every day, it just depends if you notice or are willing to admit them! Anyone can do it really, can’t they?

I’ve sort of always written, I just didn’t realise until a bit later in life. I remember writing silly bits and pieces for Cricket Club Newsletters and when emails were first invented you didn’t have any of this, ‘Guess how many emails I got today? 476!’ business. Nobody really used them for work – it was just a more covert way of skiving off than phoning your mates from the workplace had been for the last twenty years! I used to pen a good email yarn most days come 4.30pm. OK, every day, plus one at 9.30am and a few more in between, allegedly. Looking back, it was Narrative Non-Fiction.

To me, the great Narrative Non-Fiction is very funny but just as importantly, it’s poignant, nostalgic, romantic and aspirational. It’s got to make you think too, about yourself, family, friends and life. I don’t think you can write a book that is all funny – it has to have those other elements too. But without the humour it would be pretty boring and self-indulgent, wouldn’t it? (James Dyson aside, obviously.)

I love those books which make you think , Wow, I could never write that well. They’re the inspiration. However, I’ve read a lot of Narrative Non-Fiction which made me think, I could do that. 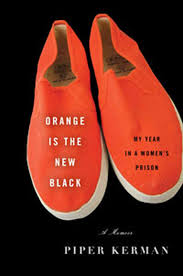 *I don’t believe in censorship, Ben. I’ll stick to sorting out your punctuation.

** If you want ‘pure funny, ‘ Ben says to check out his blog. You can follow him on Twitter @Ben_Blackman

A very big thanks to Ben – I think he has a unique voice and a talent for capturing the absurdities of everyday life in a very entertaining way.   As Ben’s book isn’t available yet, I’d like to mention the one and only NNF title I’ve read this year: Orange Is The New Black by Piper Kerman, the real-life account of a middle-class American woman’s year in jail and a very poignant and compelling read. (This is the cover of the US edition I read.)

Do you read narrative non-fiction?