It’s no surprise that certain subjects and professions lend themselves to fiction better than others. I attended a talk by a top literary agent a few years ago in which she dismissed accountancy and dentistry as a complete non-starter (in the latter case, Joshua Ferris has just proven her wrong); whilst some readers are fascinated by novels about authors, writing about writing always risks being seen as self-indulgent and pretentious unless it’s exceptionally well done. But one subject which seems to hold an inexhaustible appeal and is really ‘having a moment’ right now is the art world and the artist as character. Art is something I enjoy in real life and in fiction, which is why I asked Jonathan Gibbs to the Sofa to talk about his debut novel Randall.  It’s the latest release from the small and now high-profile independent Galley Beggar Press which published A Girl is a Half-Formed Thing by Eimear McBride, winner of the Bailey’s Prize.

It’s something I’ve been asked more than once, both by people who have read my book, and by those who haven’t: Have you ever been involved in the art world? It’s a perfectly natural question – after all, my novel Randall is all about art and artists, and it’s a first novel, and people often write about what they know – but I can always choose to take the question as a compliment: that the novel is so believable that people assume I must have studied art, or worked as an artist.

Well, the answer is No. Though art is something I’m fascinated by, it’s also something I consider myself entirely outside of. Books, music, film… these are all things I feel I understand from the inside; I could work in each of those lines, and feel reasonably confident at doing so, but art… 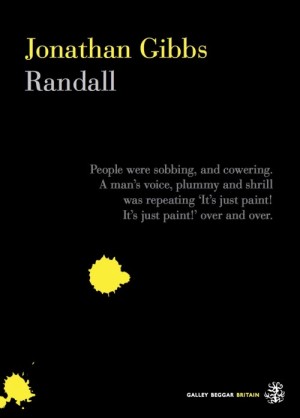 Art, when I was growing up, was the modern masters you’d find in any major gallery in Europe – Van Gogh, Picasso, Pollock: big, impressive, distant. So when I came to London in my twenties to find the Young British Artists in royal ascendance – Damien Hirst, Tracey Emin, the Chapman brothers – I was bowled over. What I loved about them was that they seemed to dispense with the history of art, and instead make something that spoke directly to me, then; just as directly as, say, MTV.

Certainly visual art and artists are both brilliant tools for a novelist. The artist is an immediately compelling character, because she is so demonstrably active, compared to, say, a writer or a musician. When she creates, she does so in a very describable, narratable way. Not so much conceptual artists, of course, and I enjoyed exploring this difference. I paid great attention to scenes of artistic creation in my novel – how a conceptual piece might be worked up from initial idea to a finished object, in contrast to the traditional painterly job of applying pigment to canvas.

Artworks, on the other hand, are compelling for the opposite reason: because they stand still. As characters grow old, paintings stay (more or less) the same. Like the fair maiden depicted on Keats’s Grecian urn, they are ageless and cannot fade. They are markers of how far we have travelled through life, mementoes both of our younger self and of our mortality.

This unchangingness of the artwork is something that Donna Tartt plays with wonderfully in The Goldfinch. Carel Fabritius’s little painting haunts the book, hanging over the narrator Theo from the moment he walks dazededly out of a bombed Metropolitan Museum of Art with it under his coat – even though, for most of it, the canvas is squirrelled away out of sight in a safety deposit locker.

When the book emerges into the light of its final pages, Tartt slips into an amazing reverie that is part art criticism, part symphonic recapitulation of the themes of the novel you’ve just read.

By the time I’d finished writing Randall I’d just about got over the habitual writer’s fear that any other book on the same subject will necessarily steal your thunder, eclipse your book and make it redundant. Nevertheless it was with some trepidation that I picked up Rachel Kushner’s The Flamethrowers. Though the eras were different (Kushner’s 70s to my 90s) the attempt to investigate and anatomise an art scene, and show how individual relationships operate within it, were the same. I decided, thankfully, that Kushner was doing different things to me in her novel. (And I thought it was overwritten, frankly.) It would not steal my thunder! It was permitted to exist!

Things would not have gone so well for Siri Hustvedt, however, had I had the magic power to vaporise rival novels when I first read What I Loved, her book looking back on the 70s and 80s New York art scene. This really was very close to what I was trying to do: not just the anatomisation of an art scene, and the relationships within it, but the presentation of all this through the prism of memory, and from the viewpoint of an intelligent but compromised inside-outsider – her narrator is an art critic, and a friend of the artists she describes, just as Vincent, in mine, is a friend of Randall, and likes to think, at least, that he has the makings of a critic.

So close was it, in fact, that I had to put Hustvedt’s novel down, 50 pages in, while I finished Randall. I was that scared of being influenced by it – or of finding things in it that I intended to put in my book, and would be now be scared to.

Seen at a distance, of course, this is a silly worry. Books are always echoing each other, knowingly and unknowingly. If art is a race, it is a relay race, and batons are always being passed (and there is no finish line). And – unlike Keats’s urn – most of them, even the great ones, drift down, more or less quickly, into the murk of our memory. The runner falls back. It is the baton that holds our attention.

Thank you to Jonathan for writing such an inspiring piece and for keeping the Literary Sofa warm this week while I’m in Paris researching my second novel. Warning: May contain art…

Do you enjoy art novels?

Due to the huge number of new releases between now and the end of July, including several of my Summer Reads 2014, I will sometimes be posting more than once a week – I hope you manage to keep up because it’s quality stuff from some very talented writers. Next week: Carys Bray, author of A SONG FOR ISSY BRADLEY, on Writing about Mormonism.