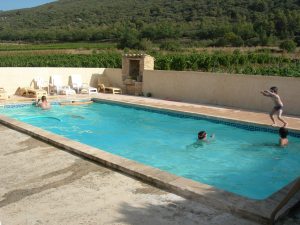 It’s been a great summer so far. The weather has been fantastic for weeks on end, even in England. In June I went on a solo trip to Paris and Brittany. Progress is good – or at least not terrible – on the second novel I started three months ago (by the way, there was a fantastic response to last week’s post and lots of interesting contributions from other writers, if you missed it). But the one thing this summer hasn’t been is relaxing. Far from it.

After this I’m vacating the Sofa until September and will be spending the second half of August in Provence doing very little but eat, drink chilled rosé, read and swim. (I won’t be writing about the trip as it would be almost identical to the post I wrote two years ago.) This is our sixth time in this heavenly spot and much as I love visiting new places, there’s something wonderful about knowing what awaits you .

So which books will I be tearing through with hours and hours to fill? My Summer Reads selection has been a big hit as usual, but I’ve already read them. The holidays are always a welcome chance to catch up on some books I’ve missed (with just one forthcoming release this time). So here’s my Poolside TBR – the only post of the year where I talk about books I haven’t read – and why they made the cut:

I’m very lucky to have an advance copy of Sarah Waters’ new novel, which isn’t out until 28 August. She’s one of my favourite writers and the most incredible storyteller, which are not always the same thing. I’ve been saving this for my holiday and haven’t even read the blurb – she always pulls a few surprises!

This is one of those books I can’t believe I haven’t read, so I was pleased when my book group chose it. I’m expecting something very powerful having been deeply affected by other novels about slavery such as Strange Fruit by Lillian Smith and The Long Song by Andrea Levy.

This author’s second novel, The Garden of Evening Mists, was shortlisted for the Man Booker Prize in 2012 and is one of the most haunting and beautiful stories I’ve ever read. In fact, it made such an impression on me that I’ll be visiting the Cameron Highlands where it is set on a trip to Malaysia later this year.  I was lucky enough to meet Eng when he visited the UK and  can’t wait to read his first novel, which some people say is even better…

Since reading Piper Kerman’s Orange is the New Black a year ago, I’ve started to enjoy memoirs and narrative non-fiction. This one caught my eye as my fascination with East Germany dates back to the eighties when I went there as a student. I haven’t read a book in German since then out of sheer laziness and this seemed a good one to get back into it. I’m hoping for all the ingredients that made The Lives of Others such an outstanding film.

This one seems to have my name on it since I am: A. a Francophile B. writing a novel set in Paris and C. fancy myself as a literary type (in case you hadn’t gathered). Some people hate novels about writers and the book world – I can’t get enough of them. The title is a quote from Hemingway’s A Moveable Feast. Vila-Mata is one of Spain’s leading novelists but as my Spanish hovers around the level of buying beer and train tickets, I’m going to do the next best thing and read it in French.

Another memoir! American life and dysfunctional families are more of my favourite subjects and this account by successful journalist Jeannette Walls of her eccentric and challenging early life between the Southwest and West Virginia sounds colourful and inspiring. When I heard two friends discussing it the other day, it shot to the top of my TBR (and my full TBR is so huge that it exists neither in physical form nor on paper – both would be too scary.)

I loved O’Neill’s previous novel Netherland and was delighted to see this one on the Booker longlist. He creates the most intriguing characters and situations and his prose is beautiful. Kudos to his publishers 4th Estate for their swift decision to bring forward the publication date (it’s now out). That still leaves four of the thirteen longlisted titles scheduled for release in September, in some cases after the shortlist is announced. This is unfair to the authors, readers and especially booksellers who can’t meet demand – it happens year after year and it’s high time something was done about it.

People keep telling me I’ll like this and it does sound promising.   I love American fiction and anything set there in the 1970s immediately sparks my interest as part of my first novel is set in Brooklyn in 1976. The theme of friendship is a draw too. I may be wrong, but as it follows a quirky bunch of people over decades it sounds a bit like A Visit from the Goon Squad by Jennifer Egan, which I really rated.

Have you read any of these?  Would love to hear what’s on your TBR list this summer (or winter, depending where you are).

See you in September!

Novelist and short story writer based in London. Debut novel PARIS MON AMOUR now out in digital and audio, paperback on 22 May 2017. Host of the Literary Sofa blog.
View all posts by Isabel Costello »
« First person, first draft – The Story of a Second Novel
Summer Holiday Seven – the Verdict »