Writer’s guilt and why I don’t recommend it 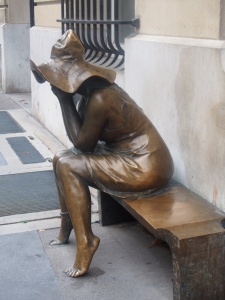 I don’t usually bang out a blog post and press Publish but sometimes it’s the only way.  Also, I generally avoid saying or becoming embroiled in anything with the faintest whiff of controversy on Twitter which, much as I love it, is fertile territory for misunderstandings and unintentional slights.  Believe me, I’ve managed to misread and mislead some close friends, felt offended for no reason and grovelled to people who weren’t at all upset by whatever innocuous thing I’d come out with. Almost as much of a waste of energy as the subject of this piece.

This morning I spotted some writing advice which concluded with an emphatic ‘write every day’.  I don’t even think it was someone I follow and it’s nothing we haven’t all seen a million times before, but something about the tone got on my nerves.  I took to Twitter, saying:

The least helpful writing tip ever (just seen again) is the bossy ‘write every day’. I’m a big believer in thinking time and downtime.

Shortly after that, Philip Hensher, author of nine novels (including The Northern Clemency, one of the greatest novels I have ever read) and Professor of Creative Writing at Bath Spa University, replied:

I think ‘try to write every day’ is not bad advice. In my experience, the non-writing days happen anyway.

It was good to hear the perspective of an author of his experience.  Even that ‘try to’ puts a different spin on it.  Suddenly it doesn’t sound like a diktat any more.  I’m not against the practice or the goal of writing every day in its own right; it works for certain people as a means of boosting motivation and productivity.  It’s the suggestion that you’re not doing it right if you don’t which can be damaging.

We’re all constantly being told what to do.  But unlike cut down on alcohol and eat your five-a-day, hard to argue with given that we all inhabit a human body and generally share a desire to stay alive, one-size-fits-all doesn’t work so well for writing.  How could it, when there are so many variables: nature of the project, author’s personality, other commitments, the obstacles most of us face, one way or another?  With the obvious exception of people willing to risk dire consequences as the price for speaking out, once a work is published does it matter if the author wrote it between tempests perched on an oil rig or on the rare nights they weren’t exhausted after work or putting the kids to bed? There’s no escaping the fact that it takes years of commitment and discipline to master any kind of writing. Putting in the hours, whenever they may be, is enough of a challenge without all this pointless GUILT.

For guilt was mentioned or implied in so many of the responses I received today.  It’s clear that ‘write every day’ can be anything but motivating if it makes talented, committed people ‘feel like a fraud’.  Worse still, it can squeeze the joy out of creativity or suppress it entirely. I am sometimes asked for writing tips and my instinct is to back off because I don’t know anything (I usually come up with something non-prescriptive, to be helpful), but actually I do know a lot about guilt.

I even feel guilty about feeling guilty. It’s a huge theme in my writing – without it, my novel would be a very different type of book: guilt and sex is such a winning combination! Who knows, maybe I wouldn’t have anything to say or would be too relaxed and blissed-out to bother. I sometimes feel guilty about writing – as in, doing it – but I refuse to feel guilty about not writing.  If there’s one thing I’ve learned – and hopefully there are several because I’m supposed to be doing a guest blog on it soon – it’s that there is an astonishingly weak correlation between the number of hours I spend at a desk (longhand is rare for me) and the quality of the end result.  The prologue to my book took me half an hour and has barely been touched since, whereas  I thought about a paragraph added in the final edit for at least two weeks and even then it took four days to make any kind of sense.

If I was going to end with a writing tip, bet you can guess what it would be.

Thanks to everyone for the interesting response today.  Thoughts?

Come back on Monday 9 May to see the cover and first page sampler of Paris Mon Amour.