Guest Author – Rachel Rhys on writing a community of strangers

It was back in 2011 that I first met today’s guest Rachel Rhys/Tammy Cohen, a fellow north London writer, just as she was about to branch out from journalism into fiction with her first novel The Mistress’s Revenge. Tammy got in ahead of the huge and unabating domestic noir and psychological thriller craze, setting the bar high, and has been prolific and successful ever since, releasing a total of seven novels in these genres. Now, under the pen name Rachel Rhys, she has proven her versatility once again by switching to the historical novel with A Dangerous Crossing, set over the course of an ocean voyage on the brink of the Second World War. I am very pleased to welcome Tammy/Rachel to the Literary Sofa to talk about the challenges and opportunities presented when writing a community of strangers. My review follows:

I’ve always loved those dramas which chuck a load of random strangers together in an enclosed setting then lob in an unexpected event and invite us to sit back to watch what happens. Disaster movies go nuts for this model. So do locked room mysteries like Agatha Christie’s Murder on the Orient Express and Death on the Nile. So when I decided to set A Dangerous Crossing entirely on a ship travelling from London to Sydney, I knew there were some pretty stellar precedents.

There’s something about being thrown together with a bunch of people you don’t know that encourages instant intimacy. It’s like when you meet people on holiday and by Day Two you’re asking them to be best man at your wedding or guardians to your children. In those situations everything is accelerated, and for a novelist that’s a godsend. No traipsing through reams of back-story to explain how the characters met, or how their friendship developed. It just arrives fully-formed on the page. But it’s a hollow sort of intimacy. All surface and no depth, leaving plenty of scope for tension and subterfuge.

A community of strangers sounds like an oxymoron. And in many ways that’s exactly what it is. Relationships are formed with often indecent haste but without real knowledge of who the person is or what they’ve done. Not surprisingly, these relationships are more volatile and changeable than in normal life. Remember the first day at university or in a new job? Chances are the people you befriend then are the ones you’ll spend the rest of your time trying to avoid. A Dangerous Crossing is all about shifting allegiances. Characters come together, break apart, form other attachments – with all the emotional fallout that entails, and without the option of being able to escape one another.

A big part of the reason for this social fickleness is that situations like this offer such rich opportunity for self reinvention. When no one knows you, the temptation is to cast off roles you might find restrictive – husband, sister, mother – and become someone else. The passengers on board the Orontes in A Dangerous Crossing all have secrets. They are all running away from something. They are all trying to an extent to be something they are not.

This presents a dilemma to a novelist. Do you write omnisciently so the reader is privy to the things characters are hiding and the lengths they’ll go to cover them up, and the tension comes from watching characters you like put their trust in the wrong people? Or do you write subjectively, so you’re uncovering the secrets alongside your characters? In A Dangerous Crossing, the action is all seen through the eyes of Lily Shepherd, a young woman travelling to Sydney to go into domestic service. When Lily’s trust is betrayed and people turn out to be not who they seemed, it is (hopefully) also a betrayal for the reader who has been similarly duped.

I think the key to writing a community of strangers is avoiding the temptation to assign the characters prescribed roles. If you label your characters in advance – the ingénue, the joker, the reckless one who nearly gets them all killed, the appeaser, the leader – you risk ending up with a fairly predictable scenario. With A Dangerous Crossing, I didn’t have a clue who anyone was before they set foot on the boat (or the page) so I was learning them at the same time as they learned each other, which was slightly* (*massively) terrifying, but exciting at the same time. And threw up lots of surprises.

The community of strangers is fertile ground for a novelist. It’s all there – drama, tension, secrets, that crucial gap between how someone presents themselves and how they really are, the danger that comes from not knowing where someone came from or what they’ve left behind there. But as with any scenario where you’re thrown amongst people you don’t know for an extended period of time, constantly having to assess and then reassess, wary about what you can and can’t say and do, it can get very tiring very quickly. By the time the Orontes docked in Sydney, I was as relieved to get off that bloody ship and back among friends as the passengers themselves. 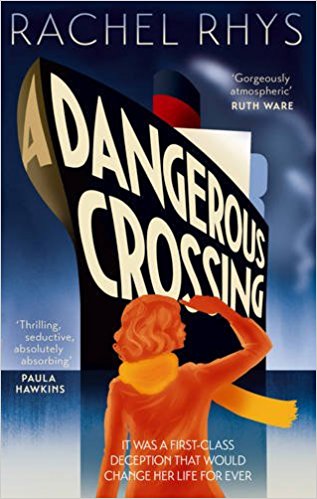 Thanks to Tammy/Rachel for this fascinating ‘below decks’ on one of the key themes of her novel.

IN BRIEF: My View of A Dangerous Crossing

A couple of months ago, there was a moment when ‘all’ I wanted of my limited reading time was to be transported away from reality by a book I would reliably enjoy and get into right away.  A tall order, but A Dangerous Crossing delivered.  I loved the glamour and decadence, which owe much to the vivid and sensual descriptions.  This was especially true of the stopovers on the ship’s route to Australia,  absolutely dripping with atmosphere, and reproducing the sense of a journey for the reader.  The period and its issues of religion and social class are well conveyed, tensions heightened by the imminent prospect of war.  There are some uncomfortable moments in which 21st century political correctness is necessarily absent as bonds and conflicts develop between the characters in the claustrophobic and artificial environment of the Orontes – these are people who would never have met or interacted as they do on dry land.  The author’s experience of handling suspense was much in evidence and the over-used device of opening with a scene from the ending – something I generally dislike – is rarely deployed to such good effect.  (I recently read a major novel which was ruined by this.) If you are looking for an upmarket ‘escapist’ read which has some depth and doesn’t compromise on quality of writing, A Dangerous Crossing is just the ticket.

Next week I will be hosting a Writers on Location post from Elizabeth Hay on the lakes of eastern Ontario, setting for Spring Spotlight choice His Whole Life, a stunningly beautiful literary novel.

Writer (novels: Paris Mon Amour 2017; Scent 2021).Host of the Literary Sofa blog. Co-founder of Resilience for Writers with Voula Tsoflias. Perfume lover and Francophile.
View all posts by Isabel Costello »
« Writers on Location – Rose McGinty on the Arabian Gulf
Writers on Location – Elizabeth Hay on the Lake of Many Bays, Ontario »