This was just going to be a review of two superb books I read on holiday in Vietnam, both set partly in that country and partly in the United States.  But then I decided to make round-ups of my reading a new regular slot because it’s bothered me for a while that some of the most enjoyable books I read each year don’t make an appearance on the blog.  I’m going to continue with my policy of only featuring titles I would recommend.

It’s great when your passions are a match – reading has inspired many of my travels and travel has led me to many books.  It always adds something reading stories set where I’m going, whether to whet my appetite or especially whilst I’m actually there.  For my trip to Vietnam I didn’t set the bar as high as ‘must have won the Pulitzer Prize’ but as it happens both of these books did.  The Pulitzer Prize for Fiction has a better hit rate with me than other major literary prizes, so that was a good sign.

I’ll start with the more recent of the two, Viet Thanh Nguyen’s novel The Sympathizer, which won the award in 2016.  Having read it, I’m surprised it didn’t get more attention in the UK but maybe I’m wrong – that can be hard to judge.  Today’s second title is a short story collection from much further back, taking the Pulitzer in 1993: A Good Scent from a Strange Mountain by Robert Olen Butler.  They have much in common – significant portions of both set in Vietnam or allude to events which took place there, but are equally concerned with the experience of Vietnamese immigrants to the USA.  Viet Thanh Nguyen is amongst them, having emigrated as a child. 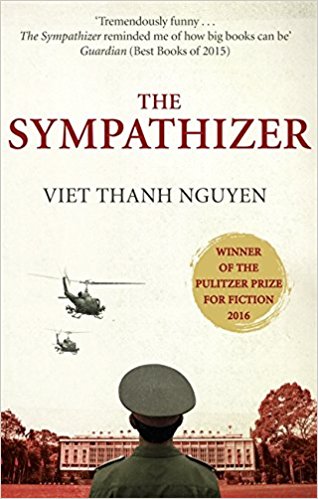 THE SYMPATHIZER by Viet Thanh Nguyen

‘You must claim America,’ she said. ‘America will not give itself to you.’

I’m very grateful to the friend who ‘sold’ me The Sympathizer on the basis that it reclaims the Vietnamese narrative on the ‘American War’, a perspective most readers will not previously have been exposed to.  As they say, there are two sides to every story, and that is an overt theme of this novel which satirises Hollywood’s treatment of the conflict in movies like Apocalypse Now.

But it is one of many themes of this ambitious debut with a premise which would consume my entire word count.  Read it here if you like, but it didn’t detract from my enjoyment not having seen it.  Spending two days in Saigon in the company of a superb tour guide definitely did enhance the experience, but luckily that’s optional.  What made this such an immersive read was the distinctive and sometimes unnerving voice of the unnamed narrator, a half-Vietnamese, half-French undercover Communist agent who goes into exile in Los Angeles following the fall of Saigon in 1975, and the complex interplay of light, depth and darkness (that would sound better if I’d stuck with two, but it really is all three.)

This has been acclaimed as a very funny book – surprisingly, given the subject matter – and I certainly thought so.  There’s an infamously crude scene reminiscent of one of the defining moments of American Pie which might change your view of calamari forever.  Whilst the novel is overlong and stalls in places, the prevailing tone of dark humour recedes in the inevitable scenes of horrific violence and brutality, as well as allowing for moments of searing poignancy – the book leaves an impression of genuine brilliance.  I found the narrator’s memories of his mother very moving, and it was fascinating to see his personal struggles with identity (as a ‘bastard’ of mixed heritage) magnified and shared by the others who accompany him into exile in the United States .  It would be worth reading for the commentary on the American way of life alone, but for a novel so concerned with clashing ideologies, what struck me most was the depth of its observations on the human condition and how eloquently they are expressed.  I highlighted dozens, and it’s a book which will continue to travel with me.

Some animals could see in the dark, but it was only humans who deliberately sought out every possible route into the darkness of our own interiors. 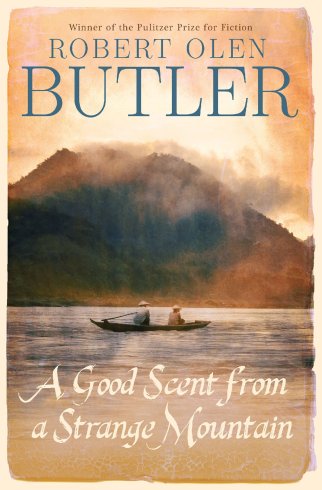 A GOOD SCENT FROM A STRANGE MOUNTAIN by Robert Olen Butler

It feels like a good time to be talking about this story collection which I suspect many will have missed as I did back in 1993 (if only because you were so young!).  I’m sure I saw something recently about sales of short fiction increasing in the UK, and although I can’t track it down, hopefully it was not a dream.  The other reason is that, post Brexit, a long overdue change is taking place in the discourse around immigration, backed by many initiatives like the bestselling essay collection The Good Immigrant.  Some of these fresh perspectives have made me realise my lack of awareness in a way that’s not particularly comfortable but that’s what good writing does, taking us beyond the limits of our own experience, privilege and identity.

25 years ago, former US serviceman and translator Robert Olen Butler pulled off something extraordinary in A Good Scent from a Strange Mountain, a collection of stories of varying length portraying the inner and everyday lives of Vietnamese immigrants to New Orleans.  Butler had served in Vietnam and his mastery of its extremely difficult language must have been key to the affinity and empathy for the Vietnamese people which was judged so convincing. Having been lucky enough to meet him in 2016, I really enjoyed hearing his voice again as the audiobook narrator.  As in The Sympathizer, the differences between Vietnamese and American culture and society are major themes here, as are the pain of separation, the personal cost of war and the enduring power of traditional beliefs.  But despite the leitmotif, every character is a deeply-inhabited individual with a voice, a world, their own issues.  This lyrical, moving collection demonstrates the breadth of empathy and imagination and the startling richness of the short form.

I’d love to hear if you’ve read either of these, or about anything else that’s impressed you lately.  Maybe you can give me some tips!