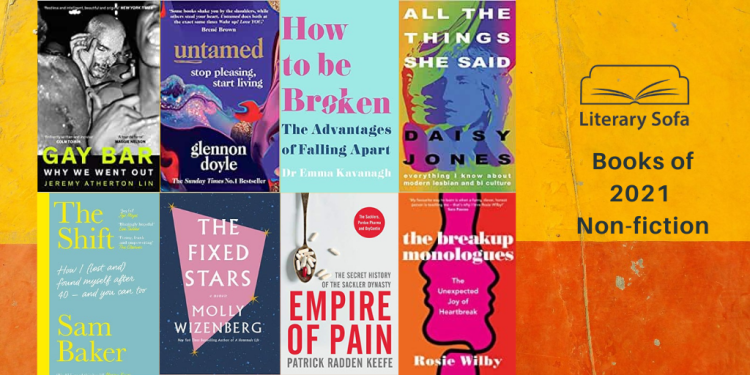 Following December’s post on my top novels of 2021 and a (mostly) nice long break, it’s great to start 2022 on the blog with my 8 personal favourite non-fiction titles of 2021, when I read way more of them than ever before. And I do mean ‘personal’, as they are quite telling of what’s been on my mind but that’s OK. Getting older does have some perks, like accepting yourself for who you are, caring less what other people think and making you focus on what you want from the rest of your life. Since my first novel was published in 2016 I’ve changed and opened up beyond recognition and that’s led to so many meaningful connections and conversations that I could easily have missed out on.

There’s something similar, albeit much braver and more exposing, going on in many of these books written by people willing to tell their story no holds barred – something I admire because I understand the risk of revealing even a little of yourself beneath the surface. I’m frequently stunned by how much I can learn and benefit from a stranger’s experience and/or expertise in the space of a few hours. These are eye- and mind-opening works which make for excellent discussions!

Last summer a friend rather pointedly gave me this book about breaking free of the boxes society tries to cram us into (it’s more of a memoir than a self-help book). In reality, it was preaching to the converted as I have strong views about sexual double standards and the way cultural conditioning so often acts to the detriment of women. (I discussed this at length in a podcast interview with Emily Jarman last September, segment starts at 00.52). I do understand why this is a Marmite book – the author seems almost proud of accepting support from others while making zero effort at friendship – but I wonder if some of the women criticising her for self-indulgence in reviews have internalised the pressure to prioritise everyone else’s needs and desires over our own.

The prejudices that erase, devalue and downgrade women over forty are deeply entrenched but increasingly coming in for vociferous challenge and exposure as a toxic bunch of myths and lazy stereotypes.  Anger looms large in Sam Baker’s bestselling book which got a mixed reception from my long-time book group of women aged 50-60 but, more importantly, sparked a brilliant and opinionated discussion. I wasn’t the one to bring up the chapter about middle-aged women and same-sex attraction (far more common than you’d think), but I’ll always be grateful to Sam Baker for providing me with a ‘well, actually…’ It was around this time that I realised I couldn’t continue as a writer who wants to change the conversation on issues like menopause and sexuality if I wasn’t willing to talk about my own.

The Breakup Monologues (the unexpected joy of heartbreak) – Rosie Wilby

Comedian Rosie and I got chatting on Twitter after we both reviewed Wednesday Martin’s excellent book Untrue which debunks the notion that women are inherently more monogamous than men (social conditioning, not you again). Her new release The Breakup Monologues confounded my expectations, ending up on my Summer Reads selection. Generously sharing her own personal experience, Rosie sets off on an investigation of relationship breakups that pretty much anyone can relate to, taking in a wide and inclusive range of people, research and anecdotes. Fascinating, insightful and empathetic, it’s a more compelling read than many novels and considerably funnier.

When I am grappling with something new, my impulse is to find out more from people who know what they’re talking about which made this a good move.  Understandably, this book centres on the perspective of the generation below but it’s also strong on wider social and historical context and very well researched.  Some things I was happy to discover, others horrified me: did you know the WHO only declassified homosexuality as a mental illness in 1990? Overall, it’s a really interesting, fun and enlightening read. I like the way the author includes both lesbian and bi culture, which reflects a natural synergy I’ve witnessed despite being very apprehensive about the reputed friction between the two before I began socialising with queer women. Maybe I’ve been incredibly lucky, but this community seems much friendlier and less judgmental to me than the world in general.

Gay Bar: Why we went out – Jeremy Atherton Lin

Like several books on this list, this is a fascinating and effective fusion of memoir and social/cultural history. I don’t have anything to compare it to – I’d never even been to a gay bar when I read it last spring – but the author comes across as the perfect person to tackle the subject, especially as he has a Transatlantic overview which really adds something. Despite many poignant and nostalgic allusions to the disappearance of queer spaces and the loss of many who inhabited them, this book feels like a celebration of the characters and places, the music, the vibe, the encounters… It’s frank, moving and a wild night out even if you’re going nowhere. Perfect for January in a pandemic.

The author of this extraordinary piece of investigative work is driven by contempt for the US opioid industry and the Sackler family who played such an instrumental role in that country’s devastating addiction crisis.  I am not surprised that he’s won awards including the Baillie Gifford Non-fiction prize but I was surprised at how compelling, shocking and tragic this very long book on what sounded a pretty dry subject turned out to be. Part rags-to-riches family saga, part portrait of a nation – taking the full sweep of society from upper-class drug barons without a shred of integrity between them to the most vulnerable and disadvantaged – this isn’t a book you aim to enjoy but one that’s hard to forget.

This is a beautifully written, searingly honest and searching memoir by a woman in her late thirties with a three-year-old daughter who left her marriage after falling in love with a female lawyer when on jury duty in Seattle. I’m not going to repeat the reasons this book touched me so deeply, more than any other I read last year (compiling a non-fiction selection isn’t usually this intense), but you can read my original review here.

How to be Broken – Emma Kavanagh

One of the few positive outcomes of the pandemic is that many people have felt able – or desperate enough  – to talk about how the enormous pressure and uncertainty has affected them emotionally and to highlight that taking care of the mind is as important as looking after our physical health. In this book police psychologist Emma Kavanagh builds on the helpful Tweet threads in which she explained the science behind the reactions people were experiencing to entirely new threats and stresses. It was recommended by my friend and co-founder of the Resilience for Writers project, psychologist Voula Tsoflias, who has taught me so much and stoked my interest in psychology. I found this book interesting, compassionate and accessible. Fundamentally, it’s about being human and it reinforced my belief and experience that some understanding of how the mind works is helpful in dealing with anything life throws at you.

I’d love to hear about your best non-fiction and memoir finds, or your thoughts if you’ve read any of these.

On 2 February I’ll be hosting Jon Ransom on the Love that dares not speak its name, discussing the portrayal of sexuality in his arresting debut novel The Whale Tattoo from Muswell Press.