It’s suddenly gone a bit ‘London buses’ here – less than a week after Ethan Joella’s beautiful piece on how personal grief inspired his debut novel A Little Hope, I’m hosting Melissa Fu whose post takes us to Western China, home to several of the settings in her own first novel Peach Blossom Spring. It’s a welcome addition to a Writers on Location series which has previously featured posts on Shanghai and Hong Kong – I’ve never been to China but it always astonishes me how hearing about my authors’ personal relationship with their locations enhances my experience of their book. For more on the latter, see my review at the end of this post.

Three years ago, I visited several cities in Western China, hoping to trace the characters’ footsteps in my debut novel, Peach Blossom Spring. Maybe it was a doomed mission from the start: I was trying to visit China of the 1930s and 1940s while being firmly rooted in 2019. It was no surprise that the paths, roads, and rivers my characters once travelled had changed. The towns and cities they inhabited had transformed. Some beyond recognition, some simply erased from the landscape altogether, existing now only in memory, photos, and story. 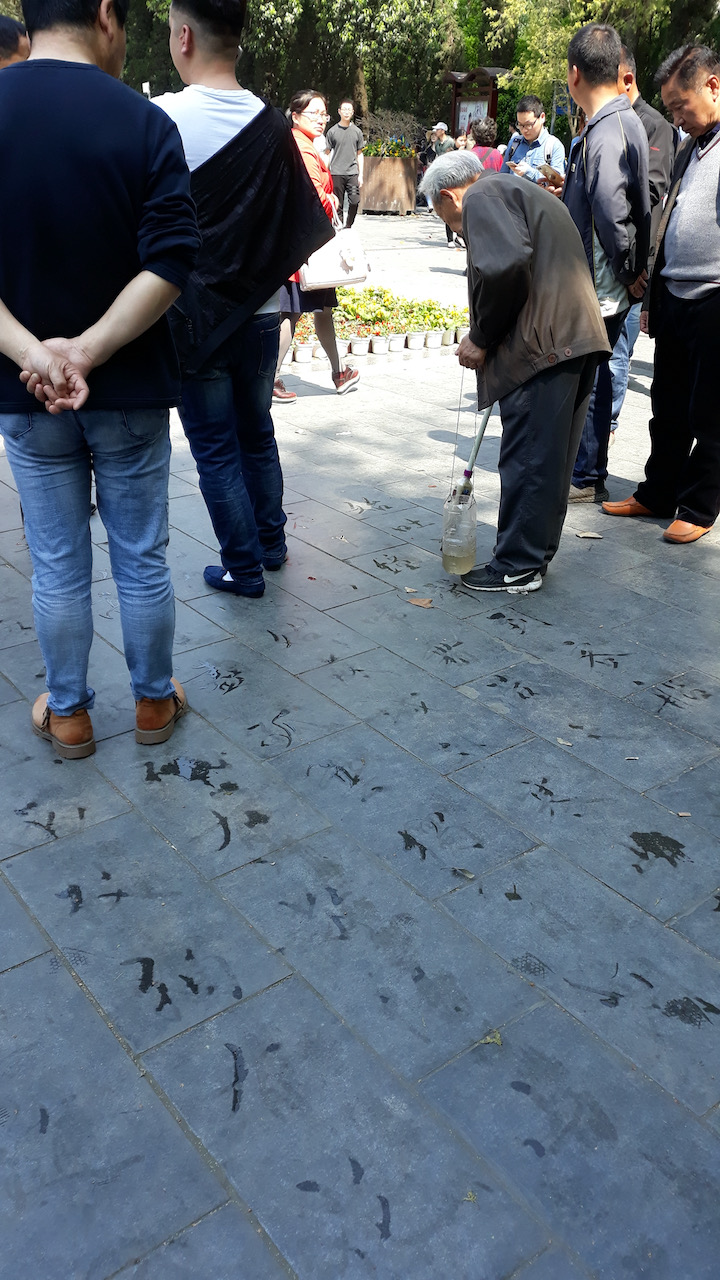 Perhaps this pitfall is inherent to research trips for historical fiction. You’re looking for places or people that can’t be found because they are in the past. You go anyway, stubbornly believing that proximity to something which used to be will give your imagination an otherwise inaccessible perspective. Maybe it’s the bite of the wind when you stand on the deck of a boat floating down the Yangtze, or the way Sichuan spices catch in your throat in a busy Chongqing market, or the ephemeral beauty of an old man writing Chinese calligraphy on the pavement with a brush dipped in water.

Here are a few of those otherwise inaccessible things I found on location:

The things you leave behind that find their way back in

In the city of Chengdu, I spent an afternoon in the People’s Park, watching people play endless games of mahjong in the leafy shade of a teahouse garden. I watched two young boys jumping from boulder to boulder, trying to catch fish in a small pond while their mothers gossiped over tea and watermelon seeds. Later, someone started playing tangos from a boombox, and an impromptu ballroom dancing session began. I was charmed by this vibrance and conviviality, and I wanted to capture the joy that pervaded the afternoon. I wrote an entire chapter that took place in that park. Ultimately, the chapter got cut, but much of the energy from that day found its way back into the story in other details. When I look at this older couple tangoing, I see the lifelong back-and-forth relationship between my characters Meilin and Longwei, holding each other close, but always at arm’s length.

The things that remain among all that is lost

In Peach Blossom Spring, my characters travel up and down the Yangtze as they cross China, first fleeing the Japanese and later the Communists. When I decided to go to China, I was determined to travel on this river. In particular, I wanted to see the western section through the Three Gorges so I signed up for a river cruise. But due to the Three Gorges Hydroelectric project, the water level of the Yangtze has risen, in some places by as much as 80 m. I was seeking a flooded, submerged place no one can visit. Still, I went. On the boat, I tried to look for what wouldn’t have changed: the silhouette of the mountains against the sky, the temples high on the hills watching over the river traffic below, the sense of moving along a mighty river to an unknown destination.

My voyage down the Yangtze ended with an excursion to the Three Gorges Hydroelectric project in Yichang. During the time of my novel, Yichang had marked a geographical turning point where the Yangtze shifted from a wide, navigable waterway into a narrow, rushing river, full of rocks and danger. Since the construction of the dam, the waterway has been tamed, but I was still curious to see the city, especially as it is the hometown of my character Meilin.

When we arrived in Yichang, what struck me was not the miraculous engineering of the dam, but the fact that everywhere along the grounds, fruit trees were in full bloom. I have very few photos of the dam because I could not tear my eyes away from the blossom. After an informative presentation about the Three Gorges project, our tour guide asked if we had any questions. I pointed at the trees and asked what kind they were. She paused, clearly having expected a question about the dam. She looked at the trees and then back at me. ‘Peaches,’ she said slowly, ‘Those are peach trees.’ Of course. And I felt like each of those blossoms was greeting me and welcoming my character, Meilin, home.

Was my trip a success? Did I tick off destinations and get the requisite snaps? Perhaps that was never the point. With travel, as in fiction, the map is not the journey, and the journey alone is not the experience. What matters is how it shapes your days and thoughts afterwards. The trip changed the book, in ways big and small. So while I might not have found exactly what I was looking for, I’m pretty sure I encountered just what I needed.

Thank you to Melissa for this lovely piece which really resonated with me – so often the benefits of on-site research are not the ones you expected and that’s a good thing!

IN BRIEF: My View of Peach Blossom Spring

Before the pandemic I regularly attended Word Factory events in London where I got to meet and hear many fantastic short story writers, some of whom were inevitably writing novels too.  It was already extraordinary that Sophie Haydock’s The Flames and Melissa Fu’s Peach Blossom Spring would be published on the same day in March 2022 after years in the making; more remarkable still that they’re two of the best, most ambitious and sophisticated, novels I’ve read in a long time. One of the reasons is that they both achieved something which has become frustratingly elusive for me over the last couple of years, completely immersing me in a world, characters and story I didn’t want to leave.

Melissa has written elsewhere about this novel being inspired by her father’s origin and migration story which she only discovered in detail late in his life. Maybe this personal connection contributes to the tenderness with which she portrays Meilin and her young son Renshu’s journey into exile after the Japanese invasion and everything that flows from that down the years. The vivid sense of place, political unrest and personal hardship and sacrifice make for a tremendously compelling and moving story, bridging continents and generations, old and new cultures and identities, memory and legacy. The prose has a haunting and poetic beauty even in the harshest moments and the recurring symbols of the family’s treasured hand scroll and the peach blossom of the title lend a satisfying emotional resonance and texture throughout. This isn’t technically an epic or a saga but it owes something to both traditions, a fresh and unique navigation of one of humanity’s most frequently trodden paths.

Things are hotting up ahead of the release of my novel Scent in paperback on 19 May. Yesterday I had the joy of holding it in my hand for the first time and am delighted with the design which adds something to the original version without taking anything away. Many thanks to Muswell Press and Jamie Keenan.