A Summer’s Afternoon in Marylebone

It says something about this year’s so-called ‘summer’ in the UK that an afternoon out in my home city without getting soaked merits a blog post, but this, in pictures and words, is the tale of a lovely outing yesterday with my husband and 10 year old son.

The London district of Marylebone is one of the main settings in the new novel I’m working on, which gives me a perfect excuse to keep spending time there doing research, you know, the kind that involves sitting on cafe terraces watching beautiful people go by, browsing in shops where I can’t afford to buy anything, and nosing around wondering about the gilded lives (I’m sure they’re not really) of the residents here and how they came to be so lucky.  A 3 bedroom mansion flat costs approximately twice what my house in north London would fetch.  I love dodgy, run-down areas but it doesn’t stop me liking the other kind.

Despite its central location just north of Oxford Street, Marylebone has a sophisticated villagey feel, beautiful architecture (as you can see in these photos) and relatively little traffic.  It’s off the beaten track for many visitors, unless they know it’s there.  Just last week, I introduced my American writer friend Kristin Celms to the area and this is what she said: ‘My main impression was that London is a very large city that manages to have lots of pockets that feel very intimate. When we turned onto Marylebone High Street, I felt as if I had just come upon a small English town out of the past. It also felt a bit like Harry Potter entering Diagon Alley for the first time: an unexpected microcosm of a city, bustling with activity. I had walked up on Marylebone Road before but never knew this area of London existed, and now it’s one of my favorite spots in the city!’

Marylebone has a fascinating history, which I’ll save for a post in the On Location series when I have time to do it justice. 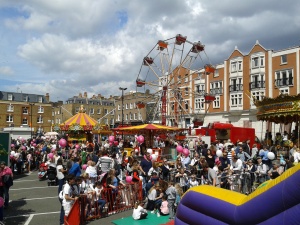 It must seem like a miracle to the organisers of the Marylebone Summer Fayre that the weather behaved yesterday – the high winds of the day before would have swept the whole thing into Regent’s Park.  Despite having grown up in this country, the British weather drives me mad and yet, I love seeing the transformation when the sun comes out, people relaxing, the instant holiday atmosphere.  We appreciate it, we relish that lightening of mood and the carpe diem feeling that comes 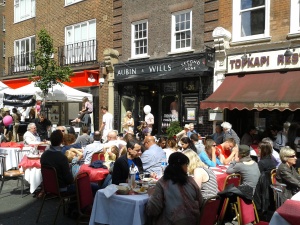 from not knowing if it will last hours, days or, if we’re lucky, weeks.  I know several people who’ve returned from living in Dubai or California, complaining that it was monotonous knowing every day would be perfect.  I’m a regular visitor to the South of France for precisely that reason; I think I would cope!

Yesterday’s event was fabulous, like a posh version of a typical English village fete gone a bit cosmopolitan:  live music (we heard the talented 19 year old singer Ciara Aaron, who sounds like a cross between Norah Jones and Dido), people sprawling around on the grass in Paddington Street Gardens, eating al fresco in the middle of Marylebone High Street, which was closed to traffic, salsa dancing in the street, free sweets and ice cream, street food from paella to curry to every kind of right-on organic, washed down by copious quantities of Pimm’s and rosé – in short, people from all over (I always lose track of how many languages I’ve heard) just having a good time. 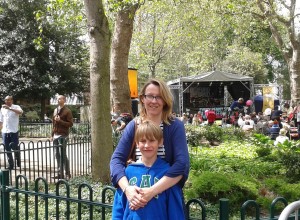 We really should do it more often.

How’s your summer so far?

Thursday is mid-summer day, the longest day of the year, an appropriate release date for Karen Thompson Walker’s debut The Age of Miracles, and also my review.

Novelist and short story writer based in London. Debut novel PARIS MON AMOUR now out in digital and audio, paperback on 22 May 2017. Host of the Literary Sofa blog.
View all posts by Isabel Costello »
« Guest Author – Wendy Wallace on Being a Debut Novelist
Book Review – The Age of Miracles by Karen Thompson Walker »

11 thoughts on “A Summer’s Afternoon in Marylebone”