Book Review – The Age of Miracles by Karen Thompson Walker 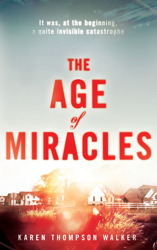 I’ve never posted a review on the day a novel is published before, but I’ve been excited about The Age of Miracles since I first heard about it last year and it’s one of my Fiction Hot Picks for 2012.  21 June is midsummer day, the longest day of the year and a fitting date for the release of Karen Thompson Walker’s debut, set in a time when the earth’s rotation slows, adding first minutes, and then hours and days to the length of time between sunrise and sunset.

As a writer, something I keep hearing is that to get published, a novel needs an irresistible ‘hook’ and ideally, a totally unique and original premise; OK, but how many can truly deliver that?  It’s a very difficult market, but stipulations like this can feel artificial; after all, many fantastic novels have more of the everyday than the extraordinary.  The remarkable thing about The Age of Miracles is that it successfully combines both.  It sold at auction for $1M in the US and £500,000 in the UK and when I read it I could immediately see why.  It has a highly original hook and an extremely powerful opening that grabbed me instantly.

The story opens at the very beginning of ‘the slowing’, when the day starts to get longer without explanation, to widespread panic.  We see it all through the eyes of Julia, an only child growing up in Southern California, as did the author.  Although it’s Julia’s first person account, much is related in the plural voice, we, and this seems to sum up the two things this book is: the story of a young girl on the brink of adolescence (the age of miracles of the title) – Julia turns 12 in the book – and a devastating  global crisis affecting everyone equally due to the effects of daylight and darkness no longer appearing in a neat 24 hour cycle.  Yes, it is dystopian fiction (I’m not usually a fan), but don’t let that put you off.  This is near future dystopia, within a few decades of our time, and Karen Thompson Walker makes it feel horribly believable.

I love American writing although I find it hard to pin down exactly why – I know there’s more to it than just the familiar but different cadences of the language.  Whatever that magical quality is, this novel has it.  The author creates a strong sense of place that anyone who knows California will recognise, before gradually rendering it unrecognisable as the slowing gets worse, until it feels as if it’s literally on another planet.   In Julia, she creates a unique character and voice – she’s likeable but a misfit, even before the slowing, isolated and intense.  Maybe she’s right that she may have found life hard no matter what, but I think that as a protagonist she will resonate with readers as they follow her through that time when the adult world encroaches on innocence, when friendships prove fickle and she realises things between her parents are not as she thought, against a backdrop of the most terrifying uncertainty.

What would become apparent soon enough was this:  We would fall out of synch with the sun almost immediately.  Light would be unhooked from day, darkness unchained from night.

Unprecedented things start to happen:  birds fall out of the sky, the force of gravity changes, plants no longer grow.  The predictable California climate is suddenly anything but.  As the day lengthens to 40 hours, many are affected by insomnia and a new sickness.   The US Government rules that everyone should remain on ‘clock time’ and carry on as before, even if kids are going to school in pitch darkness, but a significant minority rebel.  These are the ‘real-timers’, who try to follow the newly erratic rhythms of nature, some founding communes in the desert.  Suspicion and discord between the two groups leads to social unrest.

This dramatic upheaval plays out at a more intimate level in the relationships between Julia and her parents (who don’t understand her, of course, being parents), the elderly grandfather she is closer to, and neighbours in the street, and all the while Julia is suffering the usual torments of her age: the desire to fit in and be accepted, and confusion over her feelings for a classmate, Seth Moreno.  It all hurts so much.

My only criticism is that sometimes I felt Julia’s loneliness was spelled out unnecessarily – if you’ve already shown (the harder bit), no need to also tell.  This is more an observation: there were moments when only the subtle sense of looking back from some future point saved the narrative from being too mature for a young girl, not in its language but its ideas.  Here, Julia reflects on her parents’ marriage:

How much sweeter life would be if it all happened in reverse, if, after decades of disappointments, you finally arrived at an age where you had conceded nothing, when anything was possible.

Even then, the writing has a clarity and simplicity that really touched me.  It reminded me of Eugenides’ Virgin Suicides, with its poignant sense of a time in an adolescent’s life which is over but has changed everything; more predictably, given the time-bending theme, it reminded me of The Time Traveller’s Wife, but I think this novel will stay with me a lot longer.

The Age of Miracles is one of those books I wish I could have read slowly, to savour, but it is just too gripping for that.  I like novels which are about something and make me think as well as feel.  The setting may be dystopian but the questions and fears it provokes feel much more immediate.  I don’t normally like ‘disconnected’ final chapters, but here the ending had real emotional punch.  It is also one of the most visually arresting novels I’ve read, so cinematic I feel I’ve already seen the film.  The rights have been optioned by River Road Entertainment.

You know what people always say, the film is rarely as good as the book.  In this case, I think it might be –  and that would make it pretty amazing.

If you enjoy this book I can also recommend Steven Amsterdam’s short dystopian novel Things We Didn’t See Coming, which has some of the same qualities but is also funny.  For another thought-provoking alternative vision of American society, see my previous Book Review – Arcadia by Lauren Groff.

Writer (novels: Paris Mon Amour 2017; Scent 2021).Host of the Literary Sofa blog. Co-founder of Resilience for Writers with Voula Tsoflias. Perfume lover and Francophile.
View all posts by Isabel Costello »
« A Summer’s Afternoon in Marylebone
Things I Love and Hate about the London Underground »