Although it always seems weird that people start talking about their books of the year before December has even begun – the newspapers were already at it last weekend – my excuse is that I’m reading new releases in order to compile my Hot Picks of 2014 for publication next month. Looking back on the year’s reading is always interesting.

Since I started the Literary Sofa two years ago, I read more books overall, more widely in terms of genre/subject and more selectively in terms of quality now I’m more plugged into the book world. This means I’m less likely to be disappointed than in the past and most of the novels I’ve read in 2013 have ranged between pretty good and seriously impressive. (The disappointments, and there have been a few, shall remain nameless). My current tally for the year stands at 60. As a writer, I’m always slightly shocked when people ask if I speed-read. I don’t and I never would. If an author has put in the effort to write a decent book, I’ll spend however long it takes to read it. If anything, the better written it is, the more likely I am to linger over it.

It was hard, but actually not that hard, to pick my top five novels of 2013, four of which are debuts and one by a favourite author. I’ve only reviewed two in full, but all have either been included in my twice yearly listings or otherwise mentioned – the links are here and I won’t add much beyond a brief reason for my choice.
Since someone’s bound to notice, the authors are all American except for the Australian! However, of the 60 books read only 26 were by US authors (and 26 British).

The only one I’ve read twice. Amber Dermont’s writing is luminous and elegant and her compelling and complex drawing of protagonist Jason Prosper sets this above many novels about the lives of the super-privileged. Good handling of suspense and revelation and an effective contrast of settings throw Jason’s character and actions into sharp relief.

I read this debut novel having just returned from a trip to South Africa, where it is set both during and post Apartheid. This reads like the work of an established serious literary novelist: fascinating, technically ambitious, beautifully written and far more gripping than I would have expected. It was only my inability to comment on the political issues which prevented me reviewing it.

May We Be Forgiven – A M Homes (Granta)

A M Homes is one of my favourite authors and seems like such an interesting person – I would love to meet her. She writes with intelligence, compassion and humour. In this book the narrative crackles with energy and is never predictable (in fact some of it is downright implausible, but she can do that). It is both emotionally involving and sharply perceptive of American society and family life.

This was the unlikely highlight of many a keen booklover’s year: a debut by a 28 year-old Australian which fictionalises the final execution to take place in 19th century Iceland. It was also the only launch party I have attended in a darkened tunnel. It was amazing to hear the author talk about the true story and her relationship with Iceland. Stark, shocking and unique.

Like a couple of others on this list, Indiscretion is the kind of book I am particularly drawn to. The author succeeds in creating a world which pulls the reader in completely – I had trouble putting this down. Glamorous people, stylish writing and if the sex is gratuitous and voyeuristic at times – and frankly, it is – there’s a reason for that. Almost indecently clever and assured.

Other mentions: Too late and too early

During my month in the States this summer I finally read Jenifer Egan’s Pulitzer-winning A Visit from the Goon Squad (2011) which was as brilliant as I’d been told; definitely one of the best books I’ve read this year. Another outstanding novel I read in the summer isn’t out yet in the UK, which is why I’ve held it back for my Hot Picks of 2014. 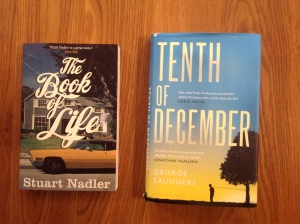 As this was the year that saw me get into reading and writing short fiction I did a feature on it but a special mention is in order for George Saunders’ Tenth of December (Bloomsbury) and The Book of Life by Stuart Nadler (Picador). Saunders was one of several big authors I was lucky to see at events this year, the others being James Salter, Lionel Shriver and Donna Tartt – all of them inspiring. Speaking of Donna Tartt, The Goldfinch has been the Literary Sofa’s most popular book review ever (thank you for reading – the next one will probably be in ten years), but as it took eleven days to read and review it’s also the reason Hot Picks may have to wait until late December depending on how I get on with the rest of my TBR.  No blurb-surfing here. I read them all in full.

If you want more Christmas book gift ideas, it goes without saying that every title on my Hot Picks 2013 and Summer Reads 2013 comes highly recommended and many are now out in paperback.

Over to you and your best books of 2013… Really looking forward to hearing everybody’s recommendations – or have you read any of mine?

Novelist and short story writer based in London. Debut novel PARIS MON AMOUR now out in digital and audio, paperback on 22 May 2017. Host of the Literary Sofa blog.
View all posts by Isabel Costello »
« 6⅔ Things I Learnt from Rewriting my Book
The Story behind Stories for Homes – an anthology in aid of Shelter »