Guest Author – Claire King on A Child’s Point of View

Although there’s been a trend for books with child narrators over the last few years, not many have appeared on the Literary Sofa.  Pigeon English by Stephen Kelman demonstrated the potential rewards for authors who succeed in capturing a child’s voice for the adult fiction market.  No wonder it’s so notoriously difficult to pull off:  the voice has to be convincing but one the reader can live with for the full length of a novel; a child’s worldview may be simple and innocent, but in order to be satisfying it must shed light on things which are not.   With her debut The Night Rainbow Claire King achieves all of this and I invited her to the Literary Sofa to tell us how and why:  (My mini-review follows)

Why choose a child?

I love unreliable narrators. Whether it is a child, a liar, someone with a distorted perspective on things or someone with memory issues… whatever the reason, you can’t take what the narrator says as read (no pun intended).

This means the reader dynamic is different. You’re not only expected to appropriate the story, and form opinions about the characters and the things that take place, but you’re expected to question the point of view of the narrator.  It adds depth to the intimacy between the reader and the story.

As the author, you need to facilitate that intimacy, ensuring that you provide information in ways other than through the simple narration – through the reactions of other characters, through clues in the environment or in how the narrator describes the environment, or via ambiguous phrases. It’s exciting to write and I hope exciting to read.

For telling the story of The Night Rainbow, there were a number of viewpoints that could have been used, the two most obvious ones being Maman’s and Pea’s. But it quickly became clear that taking Maman’s viewpoint exclusively would diminish the story because there was so much of the time that she was absent and introspective. Her viewpoint would have darkened the whole story, whereas Pea has that wonderful childish optimism and tenacity, the spirit needed to carry what is a potentially dark and difficult story through with hope.

I could also have chosen a dual viewpoint, but I feared that in this case it would result in a novel that was neither one thing nor another. I decided that if I was going to ask the reader to see things through the eyes of a five year old, that it would have to be for the duration of the novel. What I really hoped was for the reader to get to know and understand Pea and her ways of dealing with the world, and even when they can then review her situation from an adult perspective, to still accept why she sees the world as she does and to continue to live it through her eyes until the story is done.

Some novels with a child protagonist are written with an adult voice using past tense, looking back at childhood experiences. But that allows adult reasoning, whereas I wanted my narrator to not have the benefit of hindsight. I felt strongly that to work, The Night Rainbow needed to be written in present tense.

But ‘real-time’ for a child has a completely different magnitude than for an adult. Time stretches and expands. Hours go on forever, days seem interminable and a month is hard to imagine. How to get that over to readers, without the narrative dragging? The Night Rainbow takes place over a fortnight or so. It may seem longer, but it’s not. So there was the added challenge of keeping that sense of expansive time whilst maintaining a good pace to the novel.

Who was to blame?

One thing I found very liberating about writing from a child’s viewpoint is the obligation to remain neutral and without judgement. Children don’t usually have a tub to thump or social criticisms to make. They are generally very matter of fact, and see things quite simply. Which means that regardless of your own opinions as the author, you have to leave the space wide open for the reader to decide what is right and what is wrong. If I were to pose one question to reading groups or book clubs discussing The Night Rainbow, it would be: “Who was to blame?” 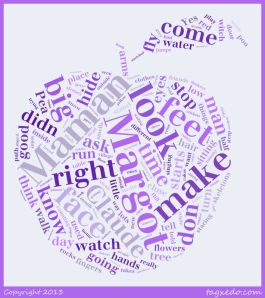 An interesting part of writing, and taking this novel to publication has been the discussion around just what is acceptable as an ‘authentic’ child’s voice.

Of course we don’t want to read a story as an actual five year old would tell it, can you imagine? But that’s not exclusive to a young voice. In any work of fiction, the author constructs a narrative voice and dialogue which is readable as well as believable.

But yes, it is hard to know where to pitch it for a five year old. Children of that age vary so widely, and unsurprisingly Pea’s voice was guided by my own experience. My daughters were four and two when I finished the manuscript, but they both talked early and had quite advanced vocabularies, and the narrative is littered with their own turns of phrase and remarks.

You have to walk a fine line, though, not slipping into language in that is notably adult, but at the same time keeping it rich and interesting. I think there are a couple of occasions I could be pulled up, but overall I’m happy with the balance I struck.

One notable effect that writing this book had was on my tissue consumption. I wept as I wrote it, I wept when I saw the cover, I wept when I saw the trailer. I am quite an emotional person but this was something else. I suspect it’s because, with the experiences and fears I have as an adult, becoming genuinely immersed in such a naïve and hopeful character has been quite a poignant experience.  Some of the tears, I should say, were happy ones.

Here is an interview I did with authors John Harding, Stephen Kelman, Caroline Smailes and Christopher Wakling of their own experiences writing from a child’s point of view.

Thanks very much to Claire for this engaging post and the Word Cloud she made to go with it.  The beautiful trailer for The Night Rainbow which she mentioned captures Pea’s voice perfectly. 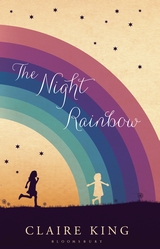 In Brief:  My View of The Night Rainbow

You’ve probably guessed that I’m hard to win over when it comes to child narrators, but by the time I finished The Night Rainbow there was no doubt that it belonged in my Hot Picks 2013.   I did think narrator Pea consistently sounded older than nearly 6, but with the positive effect of increasing the book’s readability.  In fact, the writing is lovely throughout, both emotionally and visually powerful.  Anyone reading this will be transported to the landscape of Southern France that Claire King knows so well from years of living in the Pyrenees.  It’s a poignant story of family life disrupted by grief, and the subtlety and cleverness of the storytelling left me full of admiration.  Some books have more to them than meets the eye.  This one certainly does.

Do you enjoy novels with a child narrator?  What makes it work (or not work) for you as a reader?  It’d be interesting to hear from writers who’ve tried it too (I can only write teenagers!)

No post next week – I’m taking a break to listen to my own children over half term!

Writer (novels: Paris Mon Amour 2017; Scent 2021).Host of the Literary Sofa blog. Co-founder of Resilience for Writers with Voula Tsoflias. Perfume lover and Francophile.
View all posts by Isabel Costello »
« Book Review – The Engagement by Chloe Hooper
Keeping Up with the Literary Joneses (or The Tyranny of the TBR) »