Writers on Location – Stephen May on San Francisco

After the fantastic response to Naomi Wood’s Hemingway’s Havana, the inaugural post in the WRITERS ON LOCATION series, today I am delighted to welcome Stephen May to the Literary Sofa. It’s not the first time his fiction has appeared here – Life! Death! Prizes! was one of my Hot Picks 2012 and since then our paths have crossed several times in real life. I invited Stephen to write about setting his latest novel Wake Up Happy Every Day in San Francisco, but I should have known better than to try to pin this man down. This is a piece about location, but it goes much wider – and deeper – than any one place. (My mini-review follows):

London is not England. Nor is England found in the buttermilk villages of the Cotswolds. England is not John Major’s spinster cycling back from church past the village green, and neither is it Eastenders. And it’s not Corrrie or Emmerdale either.

Most people in this country live in the ordinary unsung towns. And even if they do live in our urban centres or amid our leafier glades then they have fled there from somewhere else, somewhere less romantic but arguably more real. After all, the cities and villages of England are creations of the imagination, built from stories and songs and films.

And it means the England found in art is mostly wrong. It is a place almost entirely stitched together from grandiose fictions.

I’m an unashamed small town boy. Or, rather I am an unashamed small-to-middling sized town boy. I grew up in Bedford (on an aspirational estate where all the streets were named after birds). I moved to Colchester to study at Essex (aka known as the University of Clearing) and became a teacher in Ipswich, where I lived from 1997 – 2003. Three staggeringly unglamourous locations I think we can agree. Places that have inspired few works of art. Places that are almost the very definitions of unsung.

Places I love. And places I have tried to sing about in the handful of books I’ve written.

My first novel – Tag – was set half in Bedford, half in rural North Wales. The town in Life! Death! Prizes! Southwood is a kind of emblematic North Essex town.

And then in something of a swerve I found myself writing about a character building a life for himself in San Francisco.

We arrived in San Francisco on Christmas Day 2009. My wife, my youngest child and I had left behind a frozen England – a country panicked and paralysed by snow – and went straight to Christmas dinner with all the trimmings at the Emeryville flat of my daughter and her then partner. (For readers from my home town Emeryville is to Berkeley as Kempston is to Bedford – for the rest of you it is Berkeley’s dour and resentful neighbour. Though it is home to the Pixar studios. An anonymous warehouse as mysterious and as silent as Willy Wonka’s chocolate factory in Dahl’s story) 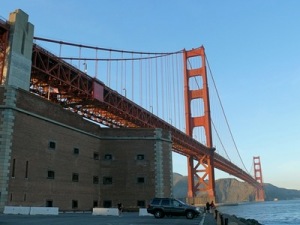 Whether it was the weather (balmy), the dinner (delicious) the company (bright, entertaining, cultured – my daughter’s partner’s family were at the dinner too. Mom, pop, sister) I found myself very quickly falling in love with the place. And it was a love that grew into something close to infatuation the longer we stayed.

I had expected to hate it too. I don’t know why. Perhaps it was hearing the Dead Kennedys’ California Uber Alles at a formative age.

But it was love. And when I fall in love with a place I want to write about it. It’s a way of getting to live there I suppose.

It isn’t possible for me to up sticks and move to Northern California but I can always experiment with how a fictional version of myself might get on. Stories let you do that. All fiction means playing games of What If? and Let’s Pretend. What If – I moved to California and, oh, while we’re at it – What If I came into unimaginable wealth?

Well, Let’s Pretend it has happened. Now let’s stand back and watch the results.

And in the resulting novel – Wake up Happy Every Day – it turns out that you can take the boy out of Bedford, but you can’t take Bedford out of the boy. My central character stays resolutely true to his small-to-middling sized town roots despite his strange new life. His wealth embarrasses him if anything and San Francisco starts to oppress him.

I should say the Bay Area isn’t the only location in my book. Some action takes place back in Bedfordshire, but some in remote fastnesses in Iceland and some in Abkhazia – which is the bit of the old Soviet Union Georgia and Russia recently went to war over.

This is my third novel and so natural that I wanted to stretch myself a bit as a writer – not just in the locations but in the characters and events. So this is a book whose landscape is populated with enigmas, oddballs and eccentrics.

In Wake up Happy Every Day you’ll come across a female MI6 assassin, an Hispanic illegal immigrant to the States obsessed with the business success of Superdry clothing. You’ll meet female boxers; septuagenarian tax inspectors on stake-outs, specialist tailors to the rich, babysitters who offer to provide ‘the second-best kind of love, volunteers in care homes after the frozen sperm of athletes. You’ll meet lovelorn tattooists, and military advisors to the government of the breakaway republic of Abkhazia…

All of them based on real people I’ve met. And met in small-to-middling sized towns to boot. And I hope readers will come away knowing that at centre of it all is a love letter to the extraordinary hearts that beat in ordinary people in ordinary places.

Thank you, Stephen. Not what I was expecting, but brilliant nonetheless! 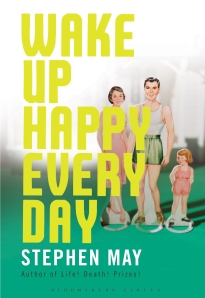 IN BRIEF: My View of Wake Up Happy Every Day

Firstly, Stephen chooses punchy original titles which really stand out as a sign of what awaits the reader (I love the cover too). His unique take on life and human nature comes through in writing which is energetic and refreshingly non-generic. Wake Up Happy Every Day has a compelling premise and a cast of characters who are as quirky as his article suggests. Whilst the story’s not always entirely believable it is consistently entertaining (sometimes downright hilarious) even as it takes on big issues such as what happiness is and whether we can ever leave our past lives behind. Nicky’s development as a character is very well portrayed. I did find the flow a bit choppy due to the number of narrative viewpoints, but it was a calculated risk. An intelligent and big-hearted novel to make you question what you wish for.

Next week, another Writers on Location post, from Jason Hewitt, debut author of THE DYNAMITE ROOM, one of my Hot Picks 2014.  He’ll be writing about Norway.

Novelist and short story writer based in London. Debut novel PARIS MON AMOUR now out in digital and audio, paperback on 22 May 2017. Host of the Literary Sofa blog.
View all posts by Isabel Costello »
« Guest Author – Karen Joy Fowler on Animals
Writers on Location – Jason Hewitt on Arctic Norway »

4 thoughts on “Writers on Location – Stephen May on San Francisco”