According to the latest edition of The Economist Pocket World in Figures, the UK heads the world ranking for new titles published, with 2,875 per million of population in 2013 (compared to 1,831 in Slovenia and Taiwan in joint second place, and 959 in the United States in 12th). I find all of this staggering and it also makes me feel a lot better about the impossibility of keeping up with new releases, especially as I like books from all over. It’s one of those things that can squeeze the joy out of book blogging if you get too hung up on it; my feeling is that a good book is worth talking about any time. And that is why, despite having missed it on release last summer, today’s Writers on Location is dedicated to a novel and a city called TOKYO.

Nicholas Hogg was nominated for the IMPAC literary award for his debut novel, Show Me the Sky. Winner of the New Writing Ventures prize for fiction, and numerous short story contests, his work has also been broadcast by the BBC. TOKYO is his third novel and he joins me to tell the story behind it. (my mini-review follows):

I wrote almost every word of my novel TOKYO in Tokyo. I wrote in cafes, bars, sometimes on trains, and often in a 24-hour McDonalds with fancy leather booth seats and panoramic views across the pulsing city. I’d first lived in Japan in early 2000, when, like many new graduates needing cash, I qualified as a TEFL teacher and flew out to a country I really knew little about. Then I fell in love with the food and the weather and the people and the immaculate trains and the tranquillity of everyday life, a peace achieved despite living in such a crowded country. But this early romance with the nation happened while I was staying in the southern city of Fukuoka, a beautiful coastal location that felt like training before a move to the real metropolis. 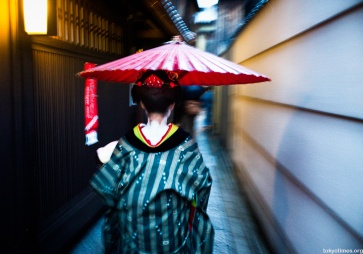 My first trip to the capital failed dramatically. I didn’t even make it past Hiroshima. Sections of my novel recount a hitch-hike made by the protagonist, Ben Monroe, a social psychologist, a journey in which he’s waylaid by a chance meeting with a nightclub hostess. These chapters of the book are fact dressed up as fiction, where real experience sparked the fantasy of the novel. I was young and impressionable and bewitched by the array of dark and fabulous Japanese folk-tales – Kaguya-hime, the story of the Luminous Night Princess, is worked into this real-life episode – and knew then that this true story would one day blend into a book. 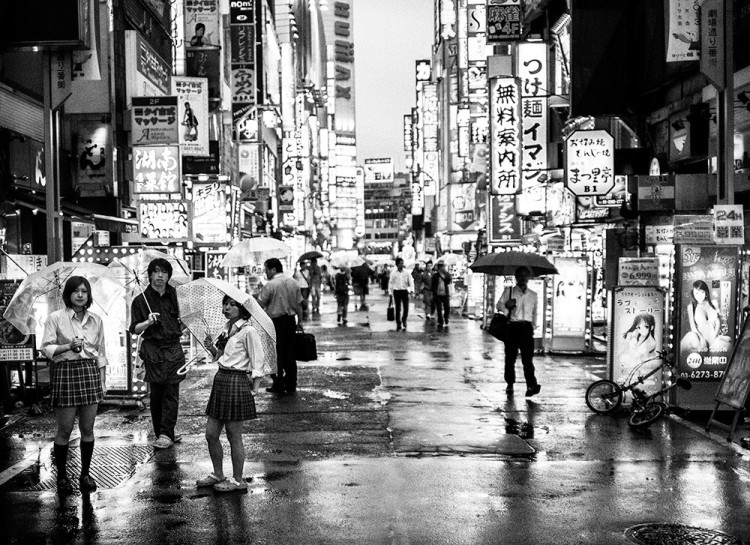 But first I needed to live in the city I’d name that novel. I can still recall arriving there for the first time, the bus from the airport appearing to hover above the circuit of the suburbs on an elevated express-way. This neon skyline was the city I’d seen in the groundbreaking sci-fi anime, Akira, and in the dystopia created for Ridley Scott’s Bladerunner. In the dazzle of bulbs the stars are absent. The dark is not dark. The night sky glows, reflecting the watts from a conurbation of advertising boards and tower blocks, and the red beacons on sky scrapers ever-flashing to warn passing air traffic.

The contrast to this machine of a city that never switches off is the calm of a traditional suburb. Within sight of the steel and glass of modern Tokyo, the narrow side-streets, crammed with little houses and neat, well-kept gardens, are Zen neighbourhoods. The Japanese work and play hard, but retiring to a quiet room at the end of a day is essential. You won’t hear drum and bass thudding your walls at midnight, although you might be woken by the cawing of crows, handsome and intelligent birds – you’ll see a crow or two fluttering across the pages of Tokyo – that are also somewhat of a pest due to their cunning in scavenging food from bins. But who could blame them for hunting down scraps in a city with more Michelin stars than any other in the world.

Life in the crowds can stress the uninitiated. Get your commute wrong and you’ll be packed onto a train and jammed under a sweating salaryman’s armpit – yes, some stereotypes are true, particularly during morning rush hour. Then again, I write a sentence in the novel about my protagonist preferring the ordered crush in Tokyo, where locals adhere to the social codes of dense living and not pushing or queue cutting, to the bustling mayhem of Oxford Street on a Saturday afternoon.

Still, however I, or my character, rate Tokyo over London, I left Japan and lived for a while in New Zealand, the US and Scotland. Then, after a year back in London, I wanted to escape again. And I always longed to be in Tokyo once more, that bright and sleek metropolis with cheap fresh fish and karaoke boxes and peace and local bathhouses where for the price of half a pint you could sit and soak in volcanically heated water. And winter sunshine. London squats under grey skies for months as Tokyo glitters and dazzles under sharp blue skies. I also missed the self I could be while I was there – calmer, a man who drank less and read more. My plan was to fly out for winter, write, and return with a third novel. It was basically an excuse to get out of London, a sort of city writing retreat, a working life I could wake up, walk and explore locations, bars, and cafes. I could also chat with old friends who’d made their ex-pat life in the country, as well as recall embedded memories that only surfaced when I returned to places I’d even forgotten I used to haunt.

I hope that Tokyo has captured the city I love. Like any metropolis it has its good and its bad side, its shadows and light. I may write about the seedy club scene and the ruthless Yakuza, but I also celebrate the people, food, transport (yes, the trains are a true joy) and the unique sense of community in Japan, as well as its traditions and remarkable folk stories – especially that tale of a stranger appearing in a foreign land.

to Nicholas for this fantastic piece – Tokyo has risen even higher on my long travel wishlist! Stunning photos © Lee Chapman 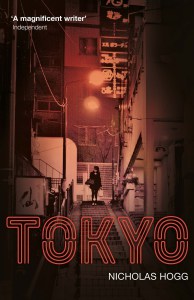 IN BRIEF: My view of TOKYO

As you will have gathered, something about this book really made me want to feature it on the Literary Sofa.  Even by the standards of the Writers on Location series, Tokyo has an exceptionally immersive sense of place that operates in many dimensions: physical, sensory, psychological. This is a sophisticated and complex (but not ‘difficult’) novel with a palpable sense of intrigue and menace that make it a consistently compelling read. I found myself empathising with protagonist Ben Monroe through his ex-pat experiences and newly rekindled relationship with teenage daughter Mazzy; the latter is an underexplored dynamic in fiction and it was poignant and believable. Ben’s complicated relationship with Kozue is fascinating (as is she) and whilst the quality of the writing impressed me from start to finish, a special mention goes to the very sensual and erotic love scenes. I will be watching out for Nicholas Hogg’s next book!

3 thoughts on “Writers on Location – Nicholas Hogg on Tokyo”