Following my ‘gratifyingly juicy’ (he said, and it really was) conversation with Rob Doyle last week I’m delighted to welcome Lisa McInerney, another bold and brilliant Irish writer, to the Literary Sofa today. Lisa’s debut novel The Glorious Heresies took the final spot on my Hot Picks 2016 and, as so often the case, I knew from the opening pages that my work was done. In the first Irish contribution to my Writers on Location series, Lisa gives us the tour of her beloved Cork City, where Heresies is set (my mini-review follows):

The important thing to know about Ireland’s second city is that its denizens are adamant that it isn’t. It’s either the Real Capital or the principal city of The People’s Republic of Cork, a joking-not-joking term for the Rebel County . . . Reader, that’s three new terms already. The exceptionalism is strong in this place.

And I am all for it. Cork – built where the river Lee splits, converges and empties into one of the largest natural harbours in the world – is an exceptional place, and though I wasn’t born here I was thinking of it as home before I’d even grown old enough to vote. I moved here at seventeen, alone, to study. This wasn’t as brave as it might seem – I had family eight miles outside the city. Still it felt like liberation, and perhaps that was a factor in my falling in love. Cork is compact and vibrant – a good city for fledglings.

The city’s physical, social and political geography are very much entwined. The accent is distinctly up-and-down, as are the streets, being that Cork is a notoriously hilly kind of place. Here’s the view from Patrick’s Hill to Patrick’s Street in the very centre of the city. Between where we are and the old Roche’s Stores building – the one with the green dome – is a distance of less than half a kilometre. Such undulating topography has left Corkonians with bottoms to die for.

The city’s dialect contains most of Ireland’s best colloquialisms: in Cork something wonderful might be handsome, massive, the berries, or me daza. Words are truncated, then suffixed with an ‘a’ sound. Patrick’s Street is Pana. Raspberry cordial is rasa. To play gooseberry is to be goosa. Everyone, regardless of age, is addressed as ‘boy’ or ‘girl’. The aforementioned up-and-down, geographically-apt accent delivers all of this rapidly at slightly elevated pitch. 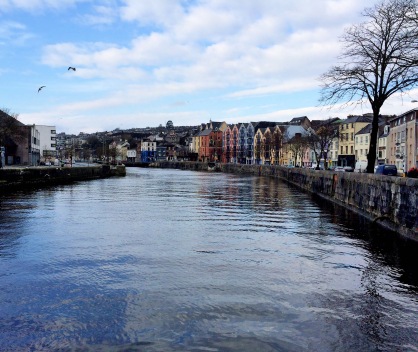 Come to think of it, they usually have. Cork is good at coffee. There are a number of excellent coffee places in the city, all trading vigorously. This works nicely with Cork’s well-deserved reputation as Ireland’s foodie destination, due in no small part to the famous covered English Market right in the city centre. It’s hardly a surprise in this context that Cork has become rather hipster in recent years (a city with that many coffee places needs baristas). Not to mention its proclivity for craft beers and whiskeys, a vibrant arts scene and a distinct musical identity (jazz ‘n’ soul ‘n’ house). It’s jammed with galleries, museums, venues, boutiques. It could well seem like Ireland’s answer to Portland or Melbourne – a haven for millennials and canny property developers who like the sound of this gentrification malarkey. But on occasion I’ve felt a loss of character about its populace – a proliferation of beards and skinny jeans, a scarcity of those with that unmistakeable accent.

But that is the way with cities: they tend to split in half.

I didn’t deliberately set The Glorious Heresies in Cork; it just came out of my fingers that way. Having lived in and around the city for a significant portion of my life (and having bonded myself to one of its sons), I find myself closer to Cork than I do to my own county’s seat. The Cork inhabited by Heresies’ cast, though, doesn’t always correspond with the city’s better features. It’s often apathetic, often treacherous. As much as you can be enchanted by Cork’s colour, you can be swallowed by its shadows.

Of course, there is social divide in every city. But there are issues particular to Cork; here the failings of the Irish government are felt especially keenly. Cork’s bitterness regarding its second-city status is seen by the rest of Ireland as a kind of vainglorious quirk; it goes deeper than that. Many Leesiders rightly feel hard done by in terms of state investment. The communities on the Northside hills are under-resourced; the city has been tormented by wintertime floods in recent years; there are neglected buildings even in the city centre – on historic streets, on the quays. In recent times a collective called CODAC (Cork Old-town District Action Committee) have begun creating street art incorporating symbols of Cork’s heritage on city centre waste ground, padlocked shop fronts and derelict sites.

This kind of grassroots activism has great potential in a city of Cork’s size. The Real Capital has a city population of about one hundred and twenty thousand people, and just over that again for its hinterland.

The events experienced by my cast in Heresies could never have happened in a bigger city. Here communities can be worlds apart in the context of social class but only across the road from each other. There is a feeling in Cork that everyone knows everyone, that two degrees of separation would be the absolute limit. The advantage to this is that there’s a sense of community and identity. Quirk becomes pride becomes integrity; the place moves to its own beat; its language patterns maintain distinct character; groups like CODAC nail Cork’s colours to the mast.

The disadvantage is that if you’ve made mistakes, they’re not easily forgotten.

Thanks to Lisa for the wonderful piece and pictures which capture the city in every dimension – I’d love to visit Cork now!

IN BRIEF: My View of The Glorious Heresies

I wouldn’t normally consider it ideal to be writing a review nearly two months after reading a novel but in the case of The Glorious Heresies I was so consumed by its dramas that a bit of distance is no bad thing. This is a big novel in scope and richness, with a large cast and multiple threads and voices which deliver something of a ‘box set’ experience. There is a chaotic and rebellious feel to it which perfectly reflects the off-beat, messy and in some cases delinquent lives of its characters, but make no mistake: this only succeeds because of a cleverly orchestrated, almost indiscernible structure together with plotting which strikes just the right balance between control and pace. The writing pulsates with life and energy but it was the emotional dynamics that really made this book for me: it is crude yet tender, hysterically funny and desperately poignant; shocking, excruciating, heartbreaking. These were people I really cared about, whose voices I can still hear; a book I genuinely loved.

Once again, a huge thank you to everyone who made the announcement of my book deal such an amazing and unforgettable time for me. I am overwhelmed by the kindness and enthusiasm from far and wide. Given the really rather imminent release of Paris Mon Amour on 13 June, I will shortly be disappearing to the New Forest for a week in complete isolation (no wifi!) to finalise the manuscript, so there will be no post next week.

On 3 March Sanjida Kay will be joining me with a fascinating piece on switching genres from historical fiction to psychological thriller, as her new book Bone by Bone is released.

4 thoughts on “Writers on Location – Lisa McInerney on Cork City”