What Elena Ferrante’s writing means to me 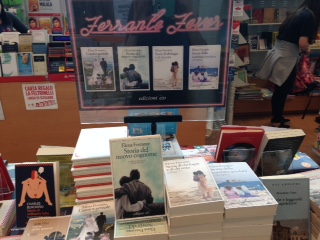 After an Easter trip to southern Italy that was directly inspired by Elena Ferrante’s Neapolitan novels (and feeling bereft on finishing the fourth and final one at Christmas), I recently mentioned on Twitter that I was planning a blog post on what this extraordinary author’s writing means to me if I could find the words.

And those words have proven very hard to find.  Assuming that I’m writing this for a mix of fellow Ferrante fans, refuseniks and the uninitiated, I’m going to keep it very simple, for my sake, not yours.  There are so many interesting and exhaustive analyses of Ferrante’s literary output and every conceivable related angle that I need not aim for critical distance or objectivity.  I probably couldn’t if I tried.  This is personal.

Our history goes like this: in summer 2014 I purchased a copy of standalone novel Days of Abandonment out of mild curiosity as I’d heard people raving about Ferrante.  Less than 24 hours later, I’d finished it, assaulted and invigorated in equal measure by the rawness, the ugly, visceral truth of it. The memory of that moment persists in every dimension: where I was sitting, the time of day, the way the light fell.   The fact that I was drinking a cup of coffee and found myself unable to swallow.  I could barely breathe.

Where do you go from there?  At least six months passed before I could contemplate embarking on the Neapolitan novels despite ‘Ferrante Fever’ raging all around me. Last year I read all four, probably the first time I have voluntarily consumed so much by a single author since I was a 13-year-old obsessed with Agatha Christie.  To those who have told me, often with a sense of regret or even inadequacy, that they can’t see what the fuss is about, I say this: My Brilliant Friend didn’t grab me either.  Not after Days of Abandonment. I was disappointed. 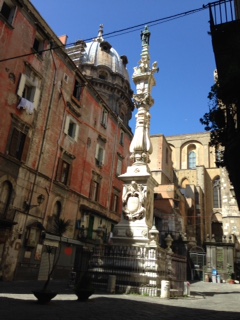 Months later, when I decided to continue with The Story of a New Name (incidentally the only one with a cover I don’t hate), the sight of the lengthy list of characters by clan which prefaces each volume made me wonder if it was worth the effort.  But that was to be the last time I referred to it, reading the second and third volumes almost back-to-back (apologies to the perfectly decent American author who intervened, you didn’t have a hope), then saving the final one a few months in order to savour it.  This is life on a big canvas, at once epic and intimate, deeply rooted in its own eras, places and issues, yet astonishingly timeless and universal.

I may not have surrendered easily but this band of shopkeepers, shoemakers and gangsters had me before long as surely as if they’d snatched me off a crowded street with a gun to my temple.  I was sucked into a culture of deprivation, corruption, machismo and normalised brutality; a man’s world that gives its female protagonists Lila and narrator Lenù (Elena) much to rage against, binding them to the city and each other in many touching and toxic ways, whether they stay or whether they leave.  Having just had a brief glimpse of Naples, I can well believe it would be complicated and I didn’t need to seek out any precise locations from the books to reach that conclusion.

Why does Ferrante’s fiction affect me so profoundly?  Well, it isn’t the writing per se.  The narration has a bracing directness, and at times, ferocity, that is entirely in tune with the story and its emotional register, and this is what makes it so compelling.  The downside is that the author’s prose style lacks elegance and features many awkward and unnatural constructions and phrases.  As so often, many English language readers attribute this to the translation but as a linguist (although neither a translator nor Italian speaker), I only had to hear Ferrante’s American translator Ann Goldstein discuss the technical challenges at an event last year to realise this was not the case.  I subsequently found this piece maintaining that the English version is an improvement on the Italian original both convincing and fascinating. 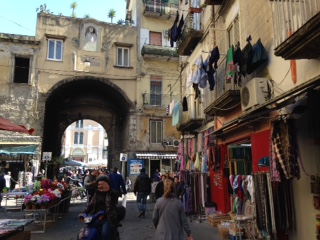 For me, particularly as a writer, the genius of Ferrante lies in a unique synergy between territory and treatment.  In amongst subjects of which I know nothing, such as Italian politics, are others I think and write about all the time, things I feel very strongly about.  So often I am conscious of a dissonance between women as we are packaged, represented, evaluated in public, the media, TV, advertising, etc – a kind of collective duping exercise leading to what you might call the ‘official version’ – and the ‘real versions’.  I use the plural deliberately because the reality of women’s experience and inner lives is of course infinitely more complex and diverse (and I’m aware that many have far greater cause for complaint and no opportunity to express it).  Fiction can contribute to redressing the balance but only if those who dare write with uncensored openness succeed in hooking up with those who can make their voices heard (or have a very loud voice to do it themselves). Readers can only engage with what’s  available and for my money, one authentic, distinctive discovery is worth ten or twenty novels rehashing the same old tropes because they supposedly ‘work’.

I appreciate beautiful writing, but I value fearlessness and honesty more.  Telling the truth is never about the method of delivery.  In exposing the under-examined dark side of being a woman, mother, daughter, wife, lover and friend, Ferrante legitimises ‘real versions’ that can be the hardest to admit to; that we are flawed, conflicted, dissatisfied, insecure.  She challenges many a stock assumption about women’s emotional make-up and behaviour and its perception by others, both male and female – and it is worth noting that the novels are taken seriously by many male readers.  I could bang on about all this for hours but I suspect I’ll be doing plenty of that as the year progresses!

Ferrante has said that her continued anonymity permits her to ‘say the unsayable’. Her work was only ever made available to readers on this basis, before she became the international phenomenon she is now, so it is not a publicity stunt.  Whilst a certain amount of speculation is inevitable, true admirers of her work respect her wishes and deplore the recent stepping-up of efforts to ‘unmask’ her, achieving nothing but making the lives of various unfortunate Italian academics and authors a misery.  It does seem likely that the Neapolitan novels have a strong autobiographical streak but I’m always  bemused by readers’ preoccupation with that issue where novelists in general are concerned.  What difference does it actually make to complete strangers? I don’t really care one way or the other if it’s a good story.  Again, I could say more but I’ll hold fire for now.

Elena Ferrante, whoever you are, you have given me countless hours of enjoyment and education in the company of characters I believed in.  You have shown me another world whilst helping me to better understand my own.  You have inspired me to be a braver and perhaps better writer, except when it comes to writing about you. Grazie mille. And thanks to Ann Goldstein too.

You know I’m dying to hear what you think…

Next week’s Guest Author is Amanda Saint, whose debut As if I were a River will be published on Monday.

14 thoughts on “What Elena Ferrante’s writing means to me”