A Novel View of Robert McKee’s STORY – Substance, structure, style and the principles of screenwriting 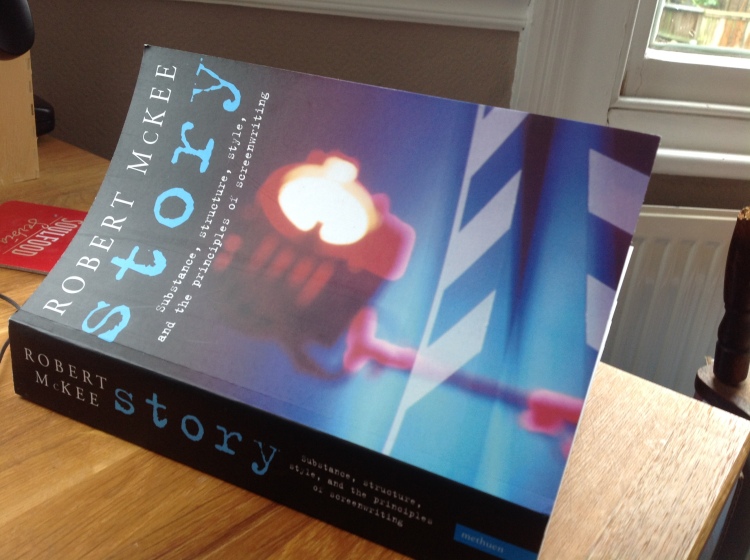 Robert McKee is a world-renowned lecturer in screenwriting, best known for the four day Story Seminar he developed whilst a professor at the University of Southern California. His former students include 63 Academy Award winners and 164 Emmy winners; the likes of Kirk Douglas, John Cleese and Peter Jackson, director of Lord of the Rings, have attended his seminar. His services have been employed by 20th Century Fox, Disney, Nickelodeon, Paramount…

You get the picture. He’s good.

McKee is coming to London at the end of April to deliver his seminar to a large audience willing to invest a substantial amount of time and money. It’s out of my reach on both counts but as the seminar is closely based on his ‘bible’ STORY – Substance, structure, style and the principles of screenwriting I got hold of that instead. It surprised me just how much of the content is as relevant to novelists as those writing for the screen and this is a taste of the things I’ve learned.

I worried that it might be difficult for me to follow as a non film buff with its huge number of film references (it was published in 1998 and hasn’t been updated) but I had seen lots of the films, most of which are very well-known (there was an impressive selection of non English language titles too). In any case, McKee is using the scenes to illustrate points and alternatives so he has to describe them in detail. Although it serves as an example of numerous points, the endless mentions of Casablanca did grate after a while (apparently day 3 of the seminar features a 6 hour frame-by-frame analysis…) Jaws and Kramer vs. Kramer get plenty of exposure too, as does Chinatown and many others I want to see even though I now know the plots inside out.

I’m not a big reader of writing books. Stephen King’s highly acclaimed On Writing has sat on my shelf for years and I’ve done no more than dip into it (though I will read it now). Since I’m in the planning stages of my second novel, it felt like a good time to read McKee’s 460 page doorstop cover to cover.

That sounds like pure masochism, and it was intense, but it was really worthwhile. What I thought might take three days actually took five, or at a total guess, 20 hours. There’s a lot of jargon in STORY, often deceptively familiar-sounding, and unless you can get your head round the distinction between characterization and true character or complication versus complexity, you can’t get the full benefit. I found it helpful to immerse myself and power through to the end (although I’m still struggling with negation of the negation.)

The tone of the book is rather grandiose and for a work which strives to discourage cliché at all costs, it isn’t without a few of its own, but I didn’t find this off-putting (in fact, in places it was unintentionally funny). Overall it was enjoyable and easy to read and McKee’s generosity as a teacher comes across. (OK, he’s sold millions but this is a lot of insight for £20.) Parts of the book are undeniably dense and technical with diagrams which look intimidating on first sight but do the job better than words.

So why would a novelist spend five days studying a screenwriting guide? Movies (I’ll use his term this once) and novels both aim to tell a story in the most compelling way possible, gaining and holding the audience/reader’s interest, getting them to invest emotionally in the characters and care about what will happen to them, i.e. how the story ends. That’s what keeps people watching/reading instead of falling asleep or giving up halfway through.

McKee lays out the principles of how to achieve this – it’s not about writing by numbers or to a formula, it’s about developing your craft, showing you how to do it in the most effective way. We’re all surrounded by story – movies, novels, TV, theatre, the news, gossip, our own lives – and are hard-wired to expect it to evolve and deliver in a reasonably predictable format: think how you feel about a disappointing ending, a story where nothing happens for ages in the middle or even a high-profile crime that remains unsolved.

But all McKee can do is give a writer the tools. When it comes to a story which will cost millions to shoot or thousands to publish, no amount of craft or even literary talent will cut it if you haven’t got something to say – something that can only come from you, the writer, but which has universal resonance. Tall order, isn’t it?

I’ve been fascinated by story structure for years. At college I studied the three-act structure on which many narratives are based in relation to classics of literature and more recently I’ve attended short workshops on it, but STORY has deepened my understanding of how it relates to my own writing no end. It was interesting to see how the book I’ve already written measured up (although I’m glad I didn’t subject the previous version to such scrutiny).

There weren’t many concepts that were completely new – anyone with experience of screen- or novel writing should be familiar with the tenets of how to handle exposition (sparingly, invisibly) and dialogue (dramatically, not realistically) for example – but the book goes into a lot of very practical detail.

Take the section on conflict, which I found particularly valuable. It would be impossible to write about happy, well-adjusted people living a wonderful life in which their every dream comes true. It’s not just boring for the audience, it’s false – reality isn’t like that.

Story is metaphor for life, and to be alive is to be in seemingly perpetual conflict.

But it’s not just about truth. There’s another reason why this is so important:

Nothing moves forward in a story except through conflict.

The protagonist has to desire something that the forces of antagonism prevent them from getting in the form of conflict. So far, so black and white. But it isn’t, of course. There is conscious desire and unconscious desire and a complex and satisfying story will have both, as well as elements of all three types of conflict: inner (emotional, mental), personal (lovers, family, friends) and extra-personal (environmental, societal, political, etc). This (and I really am scratching the surface) has given me a lot to reflect on as well as reinforcing my belief that story and character are inextricably linked and equally important.

Reading STORY has given me new respect for screenwriters and the challenges they face. Often when writing I’ve envied the way they can trust the right actor to convey emotion through expression and physical gestures which can so easily be stifled with words. But as McKee says several times, it is only the novelist who can enter the thoughts and emotions of the character and allow direct access to their interior lives. This has provided me with a lot of inspiration for the next book I write.  It’s hard to believe how much it’s taken shape in the space of just one week.

Have you read STORY or attended Story Seminar? Or maybe there’s something else you swear by – if so, I’d love to hear about it.

Next week, I’m delighted that Naomi Wood, author of Mrs Hemingway, one of my Fiction Hot Picks 2014 will be opening a new regular feature on the Literary Sofa, Authors on Location. This slot is inspired by my own love of travel and by the many novels I’ve read recently with particularly vivid, well-drawn or exotic locations.

18 thoughts on “A Novel View of Robert McKee’s STORY – Substance, structure, style and the principles of screenwriting”