After being acquainted on Twitter for some time, today’s guest Kate Brown and I first met last summer at the launch of our mutual friend Claire King’s novel Everything Love Is.  The three of us have a lot in common, including close links with France which have led us to set novels there. Hearing film maker Kate describe her debut novel The Women of Versailles made me impatient to read it, despite historical fiction set hundreds of years ago not being my thing at all.  My enthusiasm was partly fuelled by the TV series Versailles, in which I was taking a keen interest after Red Magazine asked me to comment on its portrayal of sex, which some viewers found shocking. I’d recommend Kate’s novel to anyone who enjoys the series, whether for the history or (in my case) the beautiful people, covetable wigs and century-hopping dialogue. But in the event, my appreciation of The Women of Versailles went much deeper, as I explain in the review below, which is why I chose it for my Summer Reads this year. The adolescent perspective is one I never tire of and since she explores it to remarkable effect, this is what I invited Kate to talk about today:

I am drawn to writing about teenagers. I was a wild one and sometimes it’s as if my stories are scars. Whether they come in the form of a novel about a princess in the 18th century, or a film about a young man in the early 2000s struggling to reveal to his girlfriend that he is HIV positive, they all contain little parts of me. Often, these parts sting. I can still feel the clothes I wore on days when things happened to me that I thought I’d never get over, so I put them on other bodies; that way I can see them more clearly and make sense of my experiences.

One thing I remember feeling during adolescence was an overwhelming sense of urgency. Have floated through childhood, suddenly there were all these things I wanted to happen –yesterday, preferably – but I had no control over my life. I had a daily routine I didn’t choose myself. My parents, the people I’d once trusted, felt like half-enemies. As a young woman, I felt I was being stopped from doing things I was allowed to do not long ago and only getting half answers as to why. And, at a certain point, I started to be interested in sex, but I wasn’t supposed to be. As a child, when I was in situations I found unpleasant, or boring, I used my imagination to escape, but now, fantasy wasn’t good enough. Coupled with a contradictory need to both belong and to be an outsider, life felt very confusing.

What attracted me to making Louis XV’s rebellious daughter, Adélaïde, the central character of my novel The Women of Versailles was how recognisable her teenage dilemmas were. Adélaïde’s story in The Women of Versailles is fictional, but there are key events, such as her being discovered in possession of the pornographic novel Le Portier des Chartreux, that come from historical accounts. That the Prince de Conti spent a lot of time at her side when she had smallpox, is also recorded. To add to these, I started to examine the gaps in history, the bits I could fill in.

I created moments when Adélaïde made mistakes. Not only do teenagers make them, stories turn on them. Who were her friends? Who were the people she wanted to have as friends? What the difference between the two? When and how did she find out about power? And that the reasons people hurt you generally have more to do with them than with you. Asking myself these questions, I slowly built a journey for Adélaïde to go on, one that was dominated by her fascination with her father’s mistress, Madame de Pomapdour. Pompadour was a bourgeoise from Paris, a woman who, on the face of it, was less privileged than Adélaïde, but because she understood power and had grown up needing to look after her own interests, was better at building a life for herself.

Adélaïde was vulnerable because, like other teenagers, she felt trapped in her world, she wanted more and, for her, the double standards were particularly severe. The harder she tried to define her life and who she wanted to be, the tighter the gilded cage closed around her. The central question of the novel being, of course: who will win, Adélaïde or the cage?

In The Women of Versailles, the story is set in the past but those fluttering moments of hope – maybe he’s looking at me, maybe he isn’t? Should I look back over my shoulder as I walk away? – can take place hovering on the edge of a pavement outside the high street chippy, just as easily as in the Galerie des Glaces at the Palace of Versailles. That feather light touch of their fingers that you want to have been intentional, but you’re not quite sure whether it was, will feel the same to hands from the 18th or the 21st century. It really doesn’t matter. Your character’s heart will beat with just the same awkwardness. And the betrayal by the one who held your hand but then took it away when other people were looking, will cut just as deep.

Adolescence is the most personal of times, but maybe the most universal too. It hurts, it’s full of extremes, of rollercoaster rides. For me, there will never stop being things to write about it because everything that happened to me then has come with me, into the future, into the time where I live now. And when I read a book, if it becomes truly special for me, it’s because it somehow manages to inhabit that space in which we become who we are, where we recognize our own emotions, but the writer casts a new light allowing, somehow, recognition that gives us a sense of our place in the whole.

Many thanks to Kate for this personal and sensitive piece, which I’m sure many of us will relate to as people, readers and writers. 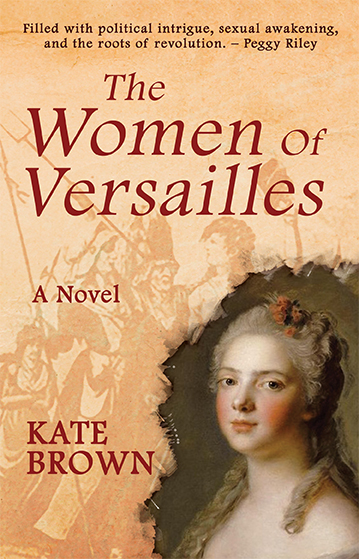 IN BRIEF: My View of The Women of Versailles

I responded strongly to this book on many levels, not just in its own right as a work of fiction, but because it demonstrates the power of great storytelling and excellent writing to transcend almost any barrier: of time, of nationality, of social setting and constraints. This debut, whilst appearing vivid and faithful to the era, is extraordinarily timeless in its portrayal of the turmoil and confusion of adolescence. Adélaïde is a fantastic, emotionally engaging character, both rebellious and vulnerable, kicking against the expectations of women in a way that is still horribly relevant today. Yet Brown does not fall into the trap of artificially super-imposing a 21st century feminist mindset; that is contrivance, whereas a genuinely universal quality is not. The theme of sexual awakening is handled with admirable candor and directness; I like it that nothing in this story is diluted, whether the force of female sexuality (even now often portrayed as less urgent than, or existing to serve, men’s) or the moral ambiguity of some of Adélaïde’s behaviour, everything related in her distinctive and unfiltered voice.  It adds up to a sexy, poignant and highly compelling account of a complex young woman, both unique and strangely familiar. I want to read more fiction that breaks away from tired preconceptions of what women characters and readers are supposed to be and to want – congratulations to Kate Brown and to small Welsh publisher Seren for doing just that.

What are your favourite novels featuring adolescent characters?

On Monday I’ll be reporting on a number of events from the Bradford Festival of Literature, one of which I’m part of, Writing and Thriving in the Digital Age. It’s an exceptionally diverse and tempting programme if you’re within reach of the city.

Later next week I’m really excited to be hosting a Prime Writers’ Showcase, highlighting over a dozen recent releases by members of this talented and dynamic group which I’m honoured to be part of.

5 thoughts on “Guest Author – Kate Brown on Writing about Adolescence”