The Verdict on my Summer Reading 2018 – Part Two

It’s been a frantic couple of weeks since I returned from Provence and the days of lounging by the pool reading for 6+ hours seem very distant. Last week I reported on half of the books I read during my August blog break, but as the others were just as good and included several I hadn’t heard of before scouting around, today’s post is dedicated to them.  There’s a very strong French theme – even the James Baldwin is set in France; all bar one are available in English translation.  (Details not included because I read them in the original.) They all merit more than the brief thoughts I have space for here.

I really enjoy fiction with an LGBT angle – this includes some of the best novels I’ve featured on the Sofa.  They’re pretty much all gay although ‘B’ is my real interest – I need to track some down.

It’s a coincidence that these three books are set in the 1950s, and two of them, Giovanni’s Room by James Baldwin (1956) and Carol by Patricia Highsmith (1952, originally published as The Price of Salt) feature protagonists who are or have been in heterosexual relationships – in denial, attempt to conform, or both – and who suffer deeply, in different ways, due to the prevailing attitudes and discrimination of the time. I found both stories superbly written and heartrending, and although initially the set-up between Carol and Therese felt unconvincing, the glamorous and atmospheric sense of the period grabbed me immediately (and you soon move beyond that when you have the

luxury of reading the whole book in one day).

I was immediately struck by the parallels between Giovanni’s Room and Garth Greenwell’s superb 2016 debut novel What belongs to you, a debt which the latter is ‘eager to acknowledge’ in this very interesting piece. In both cases I was engaged by the situation, and particularly the backstory, of the exiled American whose quest for the freedom to explore his true identity brings its own issues; but both times my sympathy lay more with the disempowered party. 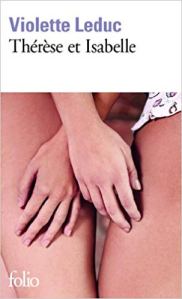 Violette Leduc’s Thérèse et Isabelle is different in that it explores the mutual sexual awakening of two 17/18-year-old girls at a boarding school over a few days.  Leduc was a fascinating woman who worked at the publishing house where she became a protegée of Simone de Beauvoir without that conferring the advantages one might expect. (I highly recommend the biopic Violette.) The text in question originally formed the opening of Leduc’s 1955 novel Ravages but was censored on the grounds of its groundbreakingly explicit depiction of sex, which was in fact the author’s stated aim, and not least the fact it was between women.  It was removed and only released separately in 1966 by another publisher, and Leduc took this and her overall struggle to find a readership hard.

This is a surprisingly uneven work, especially for one barely 100 pages long. The prose style veers between jarring and disjointed, lacking any sense of flow, and flights of sublime (occasionally obscure and excessive) lyricism.  Interestingly, I only succeeded in losing myself in it when the two girls belatedly stopped addressing each other with the formal ‘vous’. Ultimately Leduc did succeed in capturing the consuming intensity of new/first passion and desire. Decades have passed and female sexuality is still vilified, exploited and misunderstood, and if only for the exquisite physicality of the love scenes and depiction of female sexual pleasure removed from ‘the male gaze’, this is a brave and significant book that’s well worth reading.

Now for a whistle-stop tour of four French titles which have a strong element of life-writing, although only the last takes the usual form of a memoir.

The absolute highlight of my August reading was Les Années (The Years) (2008) by Annie Ernaux, which has recently been released in English by Fitzcarraldo Editions in the UK. Now in her late 70s  and a renowned writer in France, Ernaux’s own life has inspired most of her literary output but many consider The Years her finest work.  It traces her own experiences from her earliest childhood in wartime Normandy over a period of sixty odd years in the form of an ‘impersonal autobiography’ written in the third person, an unusual approach which lends a universal resonance with no detriment to frankness  or immediacy. I loved the poignant references to photos and home video.

As someone who writes in intimate female point of view, I found it immensely moving and relatable; it inspired page after page of related observations in the voice of my own first person narrator, as if I were just the scribe (if only it always worked like that!).  It undoubtedly has a special appeal for anyone who knows France but it charts the the 20th century more generally in its observation of society, racism, relationships, family, the effect of technology and the role and experience of women – for example, it made me reflect on what it must have been like to live with the fear of unwanted pregnancy.  There is no doubt this will be one of my Books of 2018. 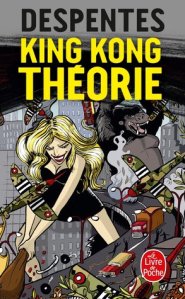 I have a lot of respect for Despentes, having loved the Vernon Subutex trilogy (particularly Vol 1 and 3) and reading this feminist essay published in 2006 confims my impression of her as a writer who combines provocation with empathy and depth of insight and enquiry.  Her way of thinking invites the reader not necessarily to agree with her, but to consider controversial issues from a different angle.  This short work draws heavily on the author’s unconventional life, from her rape at 17 by several men whilst hitch-hiking, the years she spent as a sex worker, her involvement in and views on pornography – in all of this, she challenges received ideas and pressures surrounding femininity and the female body. 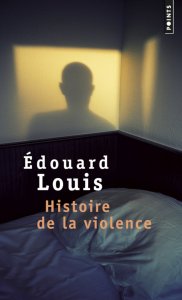 Although designated a novel, this book is a heavily autobiographical account of a late night gay hook-up which takes a brutal and horrifying turn.  It was recommended by a friend and its principle strengths for me were the insight into the attitudes of the French authorities/society towards the aggressor, a young man of Algerian origin (although not, as he is constantly called, an Arab) and towards the protagonist. As all this suggests, it’s a dark and disturbing read, and one I was keen to finish despite the author’s evident talent.  Readers have been divided by the narrative device whereby the story is mostly related by the protagonist’s sister to her silent husband with intermittent interruptions and counter-observations from Édouard himself – I admire authors who are willing to take risks of this kind but unfortunately for me the structure felt unnatural and acted as a distraction.

A brief word to recommend this to French speakers – author and professional musician Cherfi offers an engaging and uplifting account of growing up in a close-knit community of Algerian immigrants in the quartiers nord of Toulouse, his own generation French born.  It’s a funny, touching and enlightening search for personal identity (the title refers to his ‘French part’) and a triumph over discrimination, divided loyalties and low expectations.  It has plenty of depth despite a lighter tone than many books with a similar setting. A friend who lives in Paris told me it was a big hit with her book group, and I can see why.

This is a packed week on the Sofa!

Tomorrow I will be hosting the first Writers on Location post of the new season, by Amanda Huggins, writing about Japan.  It’s a recurring location in her stunning short story collection Separated from the Sea.

And on Friday, I will be running the Literary Lunch competition to celebrate seven years of running the blog.

Novelist and short story writer based in London. Debut novel PARIS MON AMOUR now out in digital and audio, paperback on 22 May 2017. Host of the Literary Sofa blog.
View all posts by Isabel Costello »
« The Verdict on my Summer Reading 2018 – Part One
Writers on Location – Amanda Huggins on Japan »

Leave a Reply to Claire 'Word by Word' Cancel reply