The summer guest author programme got off to a fascinating start last week with Bev Thomas’s post on what it means to be a ‘good enough’ mother.  Coincidentally, motherhood is also a theme in today’s featured debut Snegurochka by Judith Heneghan but it’s not the focus of today’s post  – that is firmly on the book’s setting of Kiev, capital of Ukraine, in the early 1990s.  There haven’t been many Writers on Location posts so far this year but Judith’s visit to the Literary Sofa more than makes up for that – even in a series conceived to celebrate novels with an exceptional sense of place, this is a standout. What’s more, I’m always excited to discover novels set in locations which don’t often appear in English language fiction and Snegurochka revealed a place that is unknown to me layer by layer.  You can read my review after your own trip there with Judith:

When I think of Kiev – Kyiv – the location for Snegurochka, I picture an elderly woman on a trolleybus. We are both standing, I with my baby in my arms, and she is frowning at me from beneath her fur hat. When I turn to get off, she reaches out and yanks my hair.

Perhaps the woman disapproved because I wasn’t wearing a hat, or I wasn’t looking after my baby properly, or perhaps I was simply in her way. But over time her frown became inseparable from my sense of the city as alluring, sometimes harsh, often elusive.

Snegurochka draws on this experience of being an outsider, and while my main character, Rachel, is not me, she does walk in my shoes. Like Rachel, I had moved to Kiev with my husband and our baby in early 1993, just over one year after Ukraine declared its independence from the USSR and seven years after the disaster at Chernobyl. Our apartment was on the thirteenth floor of a nondescript tower block on Staronavodnitska Street. We had views of the tram stop, the cadet academy, the wooded hill that led up to the war memorials and the steel bulk of the Motherland Monument on its plinth above the blue-grey Dnieper river.

It was an exhilarating time, but also challenging and fraught. Life for most Ukrainians was difficult, not least because hyperinflation had rendered pensions almost worthless. The shelves in the state-owned stores were often bare and many relied on a more ‘informal’ economy. For a few weeks I did little else but wash clothes in a bucket, rock our son at the balcony window and push his buggy around the wide, cold streets.

As spring came, then summer, my walks became more extensive. I would bounce the buggy across the tramlines and walk up to Lavrska Street where I scoured the dark windows of the kiosks for tea bags or nappies. I’d buy home-grown raspberries from a stall, queue for fresh bread at the universam, then catch a trolleybus down to the central Bessarabsky market for onions or honey or pears. Sometimes I’d visit the beautiful gold-domed monastery where I could sit on a bench beneath the horse chestnuts and 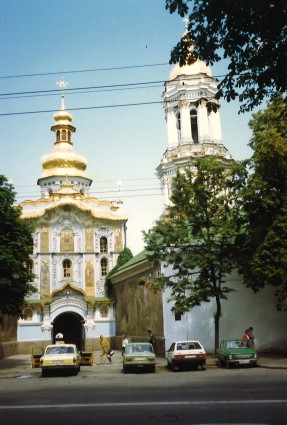 read or sketch, though more often I dawdled home through the lanes of a little enclave nicknamed Tsarskoye Selo – the Tsar’s Village. The cottages here were dilapidated but their orchards were still tended. I’d heard they’d been gifted to Party faithful, back in the day.

After a while I met a Dutch woman who had rented one of the cottages. She worked for the World Bank and spent a lot of money on refurbishments and security. She told me that the landlady, an older woman, had broken into the garden one night and picked all the apples. My new friend viewed this as trespass, but I imagined a misunderstanding about land and property and what these things might mean to someone old enough to have lived through the Great Famine of the early 1930s and all that came after. Who were those babushkas with their scowls and wagging fingers? What had they endured in their stairwells and doorways? Here was the seed for another character, Elena.

Twenty years later, back in the UK, I began to write my novel. The fictional events take place in 1993 so I relied on memory, precious photographs and a few pages of notes for a sense of place. I’d toyed with a research trip, but writing is a confidence trick and I didn’t want to muddy my perspective with more recent impressions. I needed to reach back to a time when I couldn’t speak the language, when I had a baby in a pushchair and experienced a tantalising and contradictory city in a very particular way.

Instead I waited until the edits were done before flying out to Kiev for a weekend with my two youngest children. They laughed about the way I marvelled at the cavernous old stores now full of branded goods and the shop assistants who smiled and beckoned and the restaurants we’d researched on TripAdvisor. The cottages of Tsarskoye Selo were mainly gone, of course, replaced with blank-faced embassies and homes for CEOs. Other changes were less straightforward. There had been an Orange Revolution, then the Euromaidan protests, the invasion of Crimea and continuing war in the east. The city was still memorialising its losses with shrines set into walls and a vivid exhibition at the military museum. New layers.

It wasn’t until I skidded my way across Lavrska Street that I glimpsed again what I’ve tried to capture in my novel. I saw an elderly woman, face set, her black hat and shopping bag stark against the snow. She didn’t look at me, a tourist now, taking pictures of the monastery. She was concentrating on placing one foot in front of the other.

Thanks to Judith for this transporting piece which reveals what a big part her own time in Kiev played in the novel.  Don’t miss her fabulous contemporaneous notes and sketches re local headwear which are at the very end of this post!

IN BRIEF: My View of Snegurochka

It’s a joy to read a novel in which the elements fuse so harmoniously: taut but lyrical prose, an exceptionally vivid sense of place, politics and culture but also of a pivotal time which is neither recent nor of the distant past. It’s not surprising that the author found inspiration to capture the perspective of an outsider to whom everything feels utterly strange and often intimidating, but it takes more than personal experience to convey it with this degree of realism and intensity.  I regularly say that a good novel makes me feel I’ve seen the film; this one made me feel I was there, confronted with the vertigo-inducing view from that balcony.

In a way, troubled new mother Rachel is not an easy character to spend time with, her neuroses and sense of claustrophobia having a contagious effect on the reader. But between the legacy of a dysfunctional relationship with her own mother and a commendably honest portrayal of the isolation and monotony of early motherhood known to many women who haven’t also been thrown into such a challenging situation with no support, I really felt for her.  There’s a compelling storyline where the payoffs aren’t necessarily where the reader would expect. A dark and angst-filled study of dislocation redeemed by unlikely alliances, beautiful writing and a poignant interplay of bleak and tender, it’s unfortunate that the bold choice of title (Snegurochka is the ‘snow maiden’ of Russian folklore) doesn’t easily lend itself to word of mouth, yet here we are… I may not be able to pronounce it but I’m sure you get the message.

Next week I’m looking forward to hosting Ros Franey on ‘Inventing Truth’ in her debut novel The Dissent of Annie Lang.

Novelist and short story writer based in London. Debut novel PARIS MON AMOUR now out in digital and audio, paperback on 22 May 2017. Host of the Literary Sofa blog.
View all posts by Isabel Costello »
« Guest Author – Bev Thomas – What does it mean to be a ‘good enough’ mother?
Guest Author – Ros Franey on Inventing Truth »

3 thoughts on “Writers on Location – Judith Heneghan on Kiev”