2012 has been an incredible first full year for the Literary Sofa and after months of research, tip-offs and an intense reading marathon, it’s time to unveil my Fiction Hot Picks for 2013.  It’s very rewarding when people tell me my blog is where they go to find out about the best new fiction, and compiling these listings is one of my favourite tasks, especially after Top 10 Summer Reads was such a big hit!  All the titles here are either ‘accessible literary’ or ‘upmarket commercial’ fiction and something about the writing impressed me in every case.

Titles listed in order of UK publication date – numbers for ease of reference only.

To cater for different tastes, I’ve aimed for variety in my selection – of settings: from contemporary China (8) and Glasgow (10) to early 20th century New York (9) and an evocative London novel (6) – of theme: including love, loss, immigration, family and memory – and of style: gripping psychological suspense (3, 5), a powerful and poignant coming-of-age (4), a child narrative with a difference (7).  Half my choices are debuts (2, 3, 4, 6, 7) and for the first time on the Literary Sofa, two are translations – a prize-winning Japanese noir (1) and a charming and quirky German bestseller (2).

You’ll be hearing a lot more about these titles here – book reviews and guest author posts are already being planned for the new year.

The Thief is a seasoned pickpocket who weaves in and out of Tokyo crowds, stealing wallets from strangers so smoothly sometimes he doesn’t even remember the snatch. He has no family, no friends, no connections…. But he does have a past, which finally catches up with him when Ishikawa, his first partner, reappears in his life, and offers him a job he can’t refuse. It’s an easy job: tie up an old rich man, steal the contents of the safe. No one gets hurt. Only the day after the job does he learn that the old man was a prominent politician, and that he was brutally killed after the robbery. And now the Thief is caught in a tangle even he might not be able to escape.

For Iris, childhood memories are of long hot summers spent playing with her cousin Rosmarie in her grandmother’s garden.  But now her grandmother is dead and, along with inheriting the property, Iris finds that she also inherits her family’s darkest secrets. Reluctant to keep it, but reluctant to sell, Iris spends one more summer at the house. By day she swims at the local lake, where she rediscovers a childhood companion. Alone at night she roams through the familiar rooms, exploring the tall black shadows of the past. In the flicker between remembrance and forgetting, Iris recalls the night her cousin Rosmarie fell through the conservatory roof and shattered her family’s lives, and a moment of love that made all the trees in the orchard bloom overnight.

Marta and Hector have been married for as long as Marta can remember. In fact, she can no longer recall how they met, or what life was like before Hector was there. He has always taken care of her, and she has always done everything she can to be a good wife. But now Marta is imagining things – or is she remembering them? Her ordered domestic life in an unnamed Scandinavian location is starting to unravel, and something very dark is rising to the surface…

Jason Prosper is a smart, athletic teenager, born into an exclusive world of Manhattan penthouses and Maine summer estates. Yet Jason’s passions are simple: the ocean, a sailing boat, and his friend and roommate, Cal. When Cal dies, shockingly, Jason is devastated. Unable to cope, he moves schools to the prestigious Bellingham Academy. There he meets fellow student Aidan – a girl with a troubled past – and they embark on a tender, awkward, emotional relationship. When a hurricane hits coastal New England, its destruction brings further upheaval for Jason. He is forced to untangle a terrible secret, until now hidden from him by the young men he has thought of as friends.

Liese Campbell has an engagement for the weekend: Alexander Colquhoun, a handsome, well-mannered farmer, is paying for her to stay at his property in remote Australia. Liese, an English architect in flight from the financial crisis, has been working at her uncle’s estate agency in Melbourne, where Alexander is looking for a place to buy. The luxury apartments Liese shows him become sets for a relationship that satisfies their fantasies – and helps pay her debts. It’s a game. Both players understand the rules. Or so she thinks.

Alice has just returned to London from months of travelling abroad. She is late to hear the news that her father is dying, and arrives at the family home only just in time to say goodbye.  Daniel hasn’t had a roof over his head for years, but to him the city of London feels like home in a way that no bricks and mortar ever did. He spends every day searching for his daughter; the daughter he has never met. Until now . . .

During one long, hot summer, five-year-old Pea and her little sister Margot play alone in the meadow behind their house, on the edge of a small village in Southern France. Her mother is too sad to take care of them; she left her happiness in the hospital, along with the baby. Pea’s father has died in an accident and Maman has retreated to a place where Pea cannot reach her.  Then Pea meets Claude, a man who seems to love the meadow as she does and who always has time to play. Pea believes that she and Margot have found a friend, and maybe even a new papa. But why do the villagers view Claude with suspicion? And what secret is he keeping in his strange, empty house? 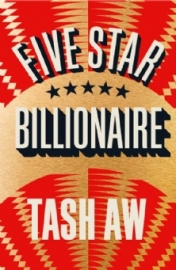 A naive golddigger; a disgraced pop star; a property magnate who has lost his way; an entrepreneur with a conscience and a business guru with a secret agenda.  Five interwoven encounters with a new China, from the life of a migrant worker to the story of the privileged few, sketching a vivid map of the burgeoning megacity and its place in the world.  Delving into the psyche of Shanghai and questioning what is left behind in the relentless push forward.

A fictionalised life of ‘Typhoid Mary.’ Mary Mallon, an Irish immigrant in turn-of-the-century New York, is headstrong and brave, a woman who has battled fiercely to better her lot in life and keep her wayward lover Alfred on the straight and narrow. She works her way up the ranks to cook for the wealthiest families in Manhattan, but leaves a trail of death and disease in her wake. When she is imprisoned in complete isolation, despite being perfectly healthy herself, she refuses to understand her paradoxical situation. Condemned by press and public alike, she is branded a murderer, but continues to fight for her freedom. Once described as ‘the most dangerous woman in America,’ was Mary Mallon a selfish monster, or a hounded innocent?

Glasgow. A city of colour and contrast. A place where two worlds collide – and are changed forever.  When the Scottish Refugee Council assigns Deborah Maxwell to act as Somali refugee Abdi’s new mentor, the two are drawn into an awkward friendship. They must spend a year together, meeting once a month in a different part of Glasgow. As recently-widowed Deborah opens Abdi’s eyes to her beloved city and its people, he teaches her about the importance of family – and of laying your ghosts to rest. All Abdi has brought with him is his four-year-old daughter, Rebecca, who lives in a silence no one can reach. Until, one day, little Rebecca starts talking. And they realise why she stopped.

Congratulations to these talented novelists and a very big thank you to all the editors and publicists who keep me in the literary loop and send me advance copies throughout the year – without you a lot of what I do just wouldn’t be possible.

I hope you’ve discovered some new titles to add to your own TBR list for 2013 and that you’ll enjoy these wonderful books as much as I did.  If you like my selection, please do share on Twitter, Facebook, with your book group…..  and if this is your first visit to the Literary Sofa, I hope you’ll be back.  2013 looks like being a great year!

Which of these novels appeal to you?  Any other titles you can’t wait to read in 2013?

I’m planning a Short Fiction Special in April (including a competition) and will of course be publishing a Top 10 Summer Reads 2013 in May for titles released from then onwards.

Novelist and short story writer based in London. Debut novel PARIS MON AMOUR now out in digital and audio, paperback on 22 May 2017. Host of the Literary Sofa blog.
View all posts by Isabel Costello »
« Book Review – Lightning Rods by Helen DeWitt
Warning – You are about to enter The Cliché Zone »