Guest Author – Karen Campbell on writing beyond her own experience 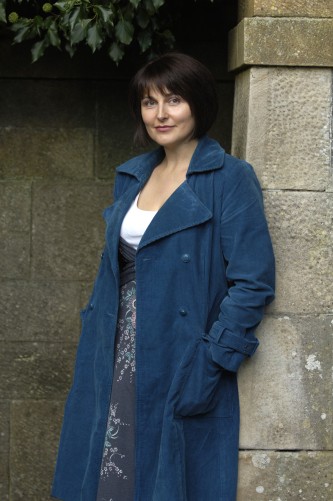 Many people say they read fiction because a book gives them the chance to step into lives other than their own.  Sometimes this comes in the form of escapism, sometimes anything but.  In fact, novels are often judged on the author’s ability to draw the reader into a world which is believable and that can only happen if the characters feel like real people.  I chose Karen Campbell’s This Is Where I Am as one of my Hot Picks 2013 because of the way it explores both universal human emotions and the specific trauma of leaving a refugee camp to begin life in another country. I wondered what it would be like to take on such a difficult subject, and I’m delighted that Karen has accepted my invitation to the Literary Sofa to talk about writing beyond her own experience:  (my mini-review follows)

Being a writer is about imagining yourself into the heads of all your characters, getting right behind their eyes, so you’re looking out at their world, not your own. I suppose it’s about trying to inhabit their skin. With the first book I wrote, I played safe. Write about what you know, they tell you. So I did. Set in Glasgow’s red light district, ‘The Twilight Time’ was told through the voice of a young policewoman, experiencing how it feels to walk down the street in a uniform when all you want to do is hide – well, that was me. I’d been there, done it, got the handcuffs (they made me hand them back when I left the job, sadly..).

I went on to write three more books in this vein, each one taking me a little further from my comfort zone: writing about being armed when I’d never held a gun; being a dynamic chief inspector when I’d only ever been a cop. But all still set in a world I was familiar with. When it came to my fifth book, I wanted to push myself further. Could I inhabit the skin of  a Somali refugee? Just to make it more complicated, let’s make it a man as well.

All my books have been about identity  – the person behind the uniform; who you are and what others see – and they’ve been about social issues too, about outsiders. Glasgow, the city in which I grew up, has the largest amount of refugees and asylum seekers in Scotland – although, contrary to the hype –  all these displaced people would still only fill half of Hampden football stadium. And none of them had anything to do with me. Most writers sook inspiration from anywhere they can – family secrets, eavesdropped conversations, a painting in a gallery, a quirky news story. Often, it’s not conscious; you just wander round with your antennae out, like a big tuned-in sponge. My husband had begun volunteering for the Scottish Refugee Council (SRC), a charity which offers support to these strangers in our midst and, one of the things he was doing was training to become a refugee mentor. As we sat, planning out where in the city you would take someone, to show them both the good and bad places, the true character of Glasgow, the thought struck me: this would make a good structure for a book. Meeting once a month, over the course of a year, at 12 different places in and around the city. I’d already been thinking about the stories he’d been bringing home from the SRC – not to steal them, but because they were so moving. And eye-opening. I couldn’t count how many times I must have said: ‘You’re joking?’ Folk destitute after having their claim for help refused. Asylum seekers left in limbo for six or seven years. Families with children, settled at school after years of living here, being ‘dawn-raided’ and returned to a place their kids no longer knew.

And I kept thinking: what if it was me? That was the key for writing ‘This Is Where I Am’. I know people can have very differing views on asylum seekers, and the book isn’t meant to be a polemic. I wanted to try and imagine what it must be like to lose your home, your job, your family and wind up in a place you never even knew existed. To become a piece of driftwood. The starting point for me was thinking about what it’s like when you go abroad, and you think you can speak a little of the language. You’re in France say, you can ask for baguettes et biere. Then your car gets stolen and you’re at the police station, all panicked, and you forget the few words you know. You can’t articulate what it is you feel. You feel stupid, vulnerable. Scared.

Multiply that  sense of panic by a million, because you’re not on your holidays, you’re in a tower block on a dodgy estate, your skin screams ‘Look at me’, you last saw your mum being dragged off by militia and you have no idea if she’s still alive. You used to be a teacher. You had a garden and a dog.

All the time, I kept thinking ‘what if it was me?’ I spoke to several refugees and asylum seekers, to try to get the facts right, about refugee camps, about the asylum process. I did loads of online research, watching documentaries about Dadaab, reading UN reports. But when it came to writing the characters, I wanted to boil all  the facts down to feelings. Abdi, my Somali refugee, is a dad who’s lost his wife. He has fled to a foreign country – which is lonely. And brave. He’s trying to get to grips with Glaswegian, which is not a tongue he’s ever heard before – and which offered me a lot of fun in the writing! He is making decisions all the time about who he can trust and what is real. About what kind of life he can make for himself now. His wee girl is hurt and he’s desperate to protect her. These are universal emotions –we’ve all felt them, which makes it easier for me, as a writer, to describe. Of course, Abdi’s traumas are far bigger than any I’ve suffered, so I was also careful to talk to a couple of doctor friends and an educational psychologist about the impact Abdi’s experiences could have, and weave these insights into the story.

If this all sounds a bit doom and gloom – it’s not! One of the main things that struck me about the refugees I spoke to is their resilience, their gratitude to their host community, and, most importantly, their hope. If anything, the book is about hope. Ultimately, This is Where I Am is a statement about where your heart is as much as your feet.

Thank you Karen for this sensitive and enlightening article.  You can hear much more about Karen’s inspiration and research for the novel in the interview she gave on BBC Radio 4’s Women’s Hour. 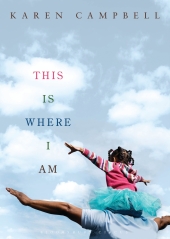 In Brief:  My View of This Is Where I Am

This novel gives a powerful insight into what the human spirit can endure.  Emotions run high throughout, but are tempered by a gritty and realistic sense of place.  This applies not only to the horrors of Dadaab refugee camp but also to Glasgow – for Abdi it’s a bleak and confusing place where he encounters kindness but also cruelty and racism.  He and volunteer mentor Deborah meet monthly over a year and the structure works well for the story, which is generally strong although some elements of the final part of the novel didn’t entirely work for me.  The writing is very assured, with some searing scenes I cannot erase from my mind as well as some tender and touching ones, particularly with Rebecca.  Discussions on immigration and asylum seekers are often one-sided; with This Is Where I Am Karen Campbell has given a voice to those who usually go unheard.  It deserves to reach a wide audience.