Until relatively recently, I was a short fiction sceptic.  The fact that I rarely read it didn’t stop me having a rather dismissive attitude: weren’t short stories a bit trivial and unsatisfying?  Why would I spend time on them when I could be reading a novel?  I was far from alone in my views.

When I started writing, those views began to change almost immediately.  My creative writing class introduced me to Chandler, Cheever, Katherine Mansfield and, most significantly, Jackie Kay’s superb collection Wish I Was Here.  Writers seem more enthusiastic about ‘shorts’ than the wider reading public, probably because that’s what we naturally produce at the beginning.  When I read mine out in class and people said, ‘Is it part of a novel?’  it wasn’t the sign of a good story, but secretly I was pleased; I wanted to write a novel, so I did. Last year when it was ‘finished’ (which it wasn’t, of course), in order to free up some fresh ideas, I started writing short stories.

But above all, I began reading them – hundreds of them – and am now a true convert.

It’s been a revelation just how powerful, moving and memorable a really good short story can be.  (Further thoughts in this Q&A I did with Amanda Saint for Retreat West).  The short fiction scene is buzzing with live events like Oxford-based Short Stories Aloud and Brighton’s Rattle Tales (to whom I owe both my performing debut and first published story!)  There are hundreds of literary journals featuring shorts and passionate advocates of the form, notably flash fiction expert Tania Hershman.  As the (very) longlists of prestigious competitions such the Frank O’Connor International Short Story Award and Edge Hill Short Story Prize demonstrate, there are top quality collections out there if you know where to look.

It’s often said the short form is gaining ground – there are many theories as to why that might be, from the short attention spans we’re told we all have (spurious) to the practicality of reading shorts on smartphones and e-readers (more credible) – but try finding any evidence of that translating into higher sales (do comment if you have any).  There’s a vicious circle which goes something like this:  agents don’t want to represent short fiction – publishers don’t want to publish it – booksellers don’t stock/promote it – readers don’t buy it.  There’s more on this in an excellent post by agent Lucy Luck but the bottom line is that publishing is a business: collections simply don’t sell the way novels do, and don’t get the same attention, reviews or promotional push.  I spend a lot of time in bookshops, and very few have a prominent display of short story collections (well done to those who do).

Pitting novels and story collections against each other isn’t a very intelligent approach (ask any short form writer who’s constantly asked if they ‘have a novel’).  They’re not the same thing, just as going to the theatre and watching a movie aren’t the same; they’re different ways to tell a story.  It’s not an EITHER/OR, either; I don’t know anyone who exclusively reads short stories.  90% of my reading is still novel-length, but the new 10% is a genuinely rewarding addition to my reading and writing life.

I hope everyone – aficionado or sceptic – finds something they’d like to try in my pick of new and recent collections.

Do you enjoy short fiction?  If not, feel free to say so and I’d love to know if you’re tempted by any of my suggestions.  The last few blogposts have prompted fantastic, lively discussions – bring it on!

My top recommendation for anyone who believes that a short story can never punch at the same weight as a novel.  George Saunders is an undisputed master of the form and I consumed this collection in a continuous state of awe.  He delivers so much in few words: humour, satire, social commentary.  His often futuristic visions are stunningly original and frankly quite terrifying.  I couldn’t forget Escape from Spiderhead or The Semplica Girl Diaries if I wanted to.  Which I don’t.

A newcomer on the American literary scene with this and his debut novel Wise Men, Stuart Nadler is arguably burdened with comparisons to the likes of Cheever and Updike and best judged on his own merits.  He has a particular gift for drawing convincing and wrenchingly poignant relationships between men.  This is a captivating insight into East Coast Jewish-American life and what it lacks in variety of theme it more than makes up for in emotional power.  I don’t often cry reading fiction but his story Visiting really made me feel like it. 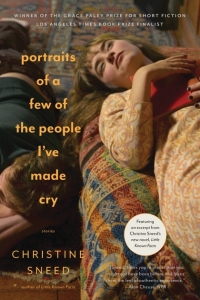 I discovered Christine Sneed on reading her debut novel Little Known Facts, which I really enjoyed for its compelling characterisation and a writing style which is warm, sophisticated and yet extremely readable.  All of which is also true of her collection Portraits.  Funny, quirky, often a little or a lot sad, these stories tell of ‘ordinary’ people’s longings, hopes and disappointments and make the gap in between very raw and believable.  The story 12+12 made me hurt for all concerned.

Deborah Levy takes the one subject on which you might think nothing much new can be said – love – and finds something that’s both strange and recognisable, coming at it from an angle nobody has previously discovered.  The title story Black Vodka reflects everything the collection is: humane in its perception, dazzling in its originality and crystalline in its expression.

Like Deborah Levy, Alison Moore made the Man Booker Prize 2012 shortlist with her debut novel.  The Lighthouse attracted praise for its stripped-back prose, its intensity and its powerful sense of darkness and menace.  This collection, consisting largely of stories written and published elsewhere over a period of 13 years, showcases the evolution of a writer who refuses to dilute her stories with artificial light or sentimentality to make them more palatable.  There’s really no need, when she knows how to make bleakness so thrillingly readable.

Next week , Australian debut novelist David Rain visits the Literary Sofa to talk about The Heat of the Sun, his novel re-telling the Madame Butterfly story.  And then 16 May promises the highlight of the Literary Sofa year – the publication of Top 10 Summer Reads.