XX or XY? Do readers care about gender of author?

Posted by Isabel Costello ⋅ June 17, 2013 ⋅ 24 Comments
Filed Under  A M Homes, May We Be Forgiven, Sexism in book world, Women only literary prizes, Women's Prize for Fiction 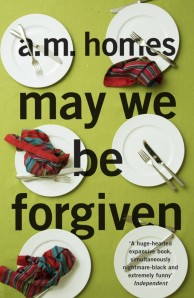 This piece started out as a review of A M (Amy) Homes’ novel May We Be Forgiven, winner of the Women’s Prize for Fiction 2013.  I’m a fan of her writing and rushed to read the book back in the autumn when it was released in the UK.  It’s tremendously enjoyable and memorable, but I soon realised my recollections are not detailed enough to do it justice.

The awarding of whatever this prize is called at the time (formerly the Orange Prize, henceforth to be known as the Bailey’s Prize) invariably generates debate about whether a major (and lucrative) literary prize open only to female writers is justified, relevant or desirable.  This year was no exception.  I’ve read a number of interesting newspaper articles and blogposts which give the industry perspective, analysing the current state of publishing, literary prizes and professional reviewing.

In reality, the entrenched gender barriers in the literary world are there all the time and are horribly divisive.   Many writers who happen to be female instinctively dislike the idea of women-only prizes and would be more than happy to settle for equal treatment alongside men:   to be taken seriously and not have to battle preconceptions about what we’re capable of writing.  Even top literary novelists have to contend with these prejudices, one of which has become a cliché in its own right – that when women write about home and family it’s ‘domestic’ and when men do, it’s a profound insight into the human condition.  When the term women writers is no longer used, we’ll know the time for women-only prizes has passed.

All this got me thinking:  Do readers care about whether a book is written by a man or a woman?   I was an avid reader long before I began writing and I didn’t think gender of author played any part in my reading choices, but when I turned to my notebook – and indeed this blog – I must admit to being nervous about what it would reveal.

In 2011, the number of books I read written by men was 22 of 55.  Last year it was 15 of 68, and so far this year it’s 14 of 32.  When I counted the number of in-depth reviews I’ve written for the Literary Sofa, it was, astonishingly, 15 all.  My twice-yearly listings (Hot Picks and Summer Reads) have so far featured mostly women writers, but I’m only interested in the book, not who wrote it.   I’m influenced by title, premise/theme and above all, the quality of the writing.  The latter is the hardest part to establish until you pick the book up and that’s where word of mouth and personal recommendations come in.  The jury’s out on professional reviews.

When I asked my Twitter followers about this subject, it generated a lively debate.  It’s obviously not a survey, but it gave some enlightening insights into readers’ decision-making processes.  The most commonly-held position was similar to my own – the sex of the author didn’t come into it.  Several men and women replied that they mostly read books by their own gender and some felt bad about it.  (Keep reading – there’s something for you below).  Some men were on a mission to read more female writers.  One female reader tends to dislike male authors’ unkind portrayal of women.  There were also comments about authors who publish under their initials or pseudonyms to disguise their gender, or who write in an opposite-sex narrative voice (which is sometimes thought to give a female writer an advantage.)  One male and one female reader told me they read almost exclusively books by the opposite sex!

Ever heard this?  That women will read books written by men but men avoid books written by women.  It’s not surprising that no men expressed this view – if they felt that way they probably wouldn’t follow me on Twitter or read my blog.  Given that women read far more fiction than men it’s maybe not a big issue in terms of sales, but if it’s true….

But IS it true?  And if so, does it matter?  I’m suspicious when things are presented in such black-and-white terms.  I know plenty of men who read books by women.   I also don’t like making the kind of sexist assumptions about men that women have to put up with.  I was recently told a true story about a man who’d chosen some novels in a shop, only to put one back when the cashier casually revealed that the (initialled) author was a woman.  I’m going to be totally honest here.  I thought what an idiot and part of me still does.

But it turns out the gender issue as it affects readers is every bit as complex as at the industry level where it’s decided who gets published, who wins awards and who gets big media exposure.   Don’t we all have the right to read what we like by whoever we choose?  The fact that someone strongly or exclusively favours male or female authors doesn’t necessarily make them narrow-minded.  In some cases it’s down to the genre – if you’re a big fan of chick-lit or romantic fiction, you won’t find much of it written by men. ( I’m not going to stick my neck out and name a genre dominated by male writers.)

This is a fascinating subject which inspires strong opinions, many questions and few answers.  I want to hear your views, and if you’ve already commented on Twitter, feel free to expand.  If you’re looking for a thought-provoking and entertaining read, I thoroughly recommend Women’s Prize for Fiction winner A M Homes’ May We Be Forgiven.  Convincingly narrated in a male voice, it’s a fantastic example of a book where the gender of the author couldn’t matter less.

I’m sticking to my belief that it’s all about the writing.

24 thoughts on “XX or XY? Do readers care about gender of author?”