In the year marking the centenary of the start of World War One I was expecting a flood of historical fiction set during that period but that doesn’t seem to have happened and I’ve only read a couple of titles so far. Before The Fall, the debut from today’s guest author Juliet West impressed me in many ways but I was especially struck by her mastery of narrative voice, something many writers find challenging. I’m very happy that Juliet is joining me on the Literary Sofa to talk about it (my mini-review follows):

I like to think I was realistic about the chances of ever getting a novel published. I’d read enough interviews with authors, agents and publishers to know that a manuscript can take years to get noticed, if it gets noticed at all. But still, I was determined to try. A few years ago, I went along to a panel discussion led by literary agents and publishers. The all-important question was asked: ‘What exactly are you looking for in a debut novel?’ Pencils were duly poised; the audience held its breath. Would the answer be plot, or setting, or lyrical prose? No. The answer was voice.

When pushed to explain, the panellists found it hard to pin down the concept. ‘We just know it when we see it,’ they said, shifting in their seats. Afterwards I slunk away, convinced that my own fictional voice would never pass this mysterious test.

Voice. Does the word refer to the writer’s narrative prose style, or the voices – the distinct personalities – of a story’s characters? I find it impossible to disentangle the two. I suppose I must have my own writing style, though I’ve never consciously cultivated such a thing. I’ve written contemporary short stories as well as historical fiction, and my style can vary wildly – from casual, conversational prose to a more formal tone.

So where do these voices come from? I’d like to claim they are gifted, fully-realised, before a word is ever set on the page, but usually the process is far more complex. I have to get to know a character, to spend time researching or imagining the character’s world, before the voice begins to emerge. The character dictates the voice. To impose a voice from the start is, I’m beginning to think, a kind of literary despotism.

Yet when I began to write my First World War novel Before the Fall, I was in full despot mode. I decided that the book would have the broad sweep of Birdsong or Parade’s End. It would be narrated in the third person, and my omniscient voice would roam London’s East End streets, switching to the battlefields of France, Greece and Egypt. An epic, no less.

In late 2010, I set to work. Disaster. The prose felt twee and clichéd. My main character, Hannah Loxwood, pottered around Poplar in her thin-soled boots; ethereal, aimless and frankly a bit boring. My novel was based on a true story – I knew exactly how much was at stake – yet I couldn’t sense what was driving Hannah.

Around this time I borrowed an old photograph from my mum’s family album and propped it on my desk. Taken around 1900, it shows my great-great grandparents, their two daughters and two friends (including the impressive ‘Mrs Harrison’ in a feather-and-fruited hat). They were working class Londoners who’d clubbed together to have a photograph taken. I didn’t know this generation of my Battersea family, but I knew their descendants well – my beloved Granddad (son of Louise Coleman, standing in the middle of the photograph), and his characterful sisters Marmo and Doris. They died long ago, but staring at this photograph, I could summon their voices. Auntie Marmo and her funny sayings: ‘Piles for the people, haemorrhoids for the haristocracy’; Doris and her smoker’s croak, assuring me that ice cream was the best cure for my tummy ache.

Hannah was definitely not Doris or Marmo, but looking at this photo somehow transported me to Hannah’s fictional world. She became real to me, immediate. I decided to experiment with a first person, present tense voice.

I sensed as soon as I started writing that I’d found a more authentic voice for Hannah. Whether this voice would interest agents and publishers, I still had no idea, but it interested me.

As I closed in on Hannah, my perspective on the book changed. Geographically, the focus became tighter: I decided to stay in London rather than follow Hannah’s husband to the battle zones of Europe. But I knew I couldn’t inhabit Hannah’s voice for the entire novel. I wanted her lover, Daniel, to have his own scenes and distinct world, yet he remained a sketchy character in my mind. Six months after starting the novel, I still hadn’t written a single word in Daniel’s voice.

In May 2011 I went on a two-day writing workshop. The group was asked to answer a series of quick-fire questions. One of these was: ‘If your character was a plant, what would he be?’ I scribbled down ‘raspberry bush’. Nothing startling about that, but this random thought proved a turning point. As a ship-repairer living in Poplar, I’d never imagined that Daniel would be interested in plants. But now I pictured him with a part-time gardening job in a large house across the river. His employer was a down-at-heel aristocrat. She couldn’t afford to pay Daniel, but she let him borrow her books.

Daniel became an outsider, a quiet dreamer mocked by family and workmates for his ‘book learning’. I wrote his sections in the third person – the element of detachment felt right – but I stuck with the present tense narrative.

Finally I had my two voices, and I felt certain that this was a novel worth finishing. In spring 2013, I was ready to send out the manuscript. To my astonishment, my book passed the voice test. I found an agent, and then a publisher, within the space of eight weeks.

Before the Fall is published this month. If you ask me to put into words how this feels, I’d struggle to explain. For once, my own voice is certain to fail me.

Thank you very much to Juliet for this delightful piece and photo, which give a real flavour of the novel. 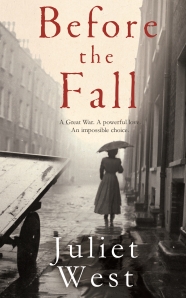 IN BRIEF: My View of Before the Fall

There are many elements to Before the Fall ; it’s a fictionalised version of a true story, a family saga, a love story and a war novel and does all of these well. The quality of Juliet’s writing and her confident use of narrative voice play a big part in that and are noticeable from the very beginning. She brings Hannah and Daniel to life, making their relationship and the moral dilemma at its heart real and engaging. Her ear for dialogue and eye for period detail make this a rich and evocative read in which the last hundred or so years melt away. This is also a brave novel which doesn’t shy away from the bleakness of real events. Poignant throughout, at times it is deeply shocking and upsetting, but not in the way you might expect of a WW1 novel. A humane and compelling debut.

*NEXT WEEK – My TOP SUMMER READS 2014 will be revealed on WEDNESDAY 21 MAY, featuring 12 titles and the chance to win the book of your choice.*