I launched the Writers on Location series almost a year ago to showcase novels which have interesting settings and a particularly strong sense of place. It’s become very popular and has featured some fascinating pieces by authors who’ve set their books in locations that were sometimes new to them, sometimes familiar and in some cases, their home town. If you live in the northern hemisphere and can’t wait to see the back of January, you’re in for a treat – today’s much needed burst of heat and sunshine is courtesy of Peter Nichols who joins me to reflect on his long-term links with Mallorca,  the setting for his new novel THE ROCKS.  It’s one of my Hot Picks 2015. (My mini-review follows): 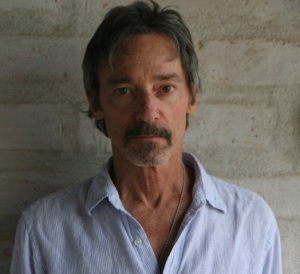 In the early 1960s—or, to think of it another way, about sixteen years after the end of World War 2—my parents bought a house outside the fishing village of Cala Ratjada on the eastern end of Mallorca. There were two beautiful beaches west and north of the village, thinly populated in those early days, even in August, but signs of an embryonic tourism were already evident: a few pensions, a number of tourist bars and restaurants, shops selling bullfight posters and bota wine bags, and a nightly open air discotheque, the Mira Vista, run by a harassed-looking middle aged Englishman name Tony Wheeler. There was also a villa with sage green shutters on the rocks beside the sea, a short walk along the harbour from the center of town, owned by an English family, the Cumberleges, who ran it as a small hotel, called the Sea Club. A few modest wooden sailboats (you never saw fibreglass then), flying French, German, Dutch, Scandinavian flags, occasionally tied up at the concrete quay that formed the outer arm of the small fishing harbour.

Small hills rose behind the coast, their lower slopes covered with groves of olive, lemon, almond and carob trees. About a kilometre inland, sprawling atop the hill rising behind our little house, lay an old ruined castle of tawny stone, overgrown with Indian fig prickly pears—Moorish, Spanish? who knew; but after I saw the 1961 film El Cid, featuring Charlton Heston charging in and out of similar-looking castles, I caught an empirical whiff of Spanish history more pungent than any of that 1066 stuff I was being force-fed at school in England. My mother, an artist, painted views of those hills seen from our house and one of her burnt umber landscapes, its contours as indelible to me as a familiar face, hangs beside me as I write.

The people I got to know best there were not the local Mallorquíns (culturally and historically Catalan), but other northern Europeans; a community of people leading interesting, at times distressing personal lives, who either lived on the island year round, or spent their summers there year after year, as my family did, and their children, many of them my age. My friends’ parents were self-employed professionals, artists, writers, or nonviolent sweet-natured criminals, mysteriously self-supporting or genteelly impoverished, occasionally sleeping with one another in a manner that disturbed no one. In unspoken ways, they recognized one another, and everything they did made perfect sense to them; they often arrived on the island as pariahs of the outside world, but were soothed and taken in by their tolerant and nonjudgmental friends and lovers on Mallorca.

Since I went to all-boys boarding schools in England, this is where I met girls, in a meaningful way, for the first time. They were mostly French: Véronique, Florence, Natalie, and Minka. Sitting on the harbour wall above the fishing boats, they taught me how to kiss. This must be one of the roots of my lifelong Franco—not Mallorco—philia, and my love of fishing harbours at night.

Every summer, this constellation of people changed subtly. We boys and girls grew older. We spent more time away from our parents, rode mopeds and motor scooters, went to boums at one another’s houses, hung out in the Mira Vista. I spent more time at the Sea Club, which was my entrée to the adult word, where I had my first beer—San Miguel—and caught a sense of the play of grownups cut loose from their normal lives for a week or two.

Then I grew up and went away.

Fifty years later, for various catalytic, mostly emotional reasons, memories of that time and place and all those people began flooding through me. Graham Greene wrote that forgetting is the compost of the imagination, and with a wish to go back in time and ‘play’ there again, I started writing a novel set in a Mallorca that resembled the one I’d known. Memory, we know, is fluid and dynamic, and alters throughout life; events change the longer we remember them. Greene wrote too that at the end of his life the people he remembered best were the characters he’d invented. Though it’s fiction, and nobody is based on anyone I knew, everything I wrote in my novel, The Rocks, now seems more real to me than any of my hazy memories.

Thank you to Peter for these wonderfully atmospheric snapshots (words and pictures) of Mallorca. (Peter is seated far left in the photo!) 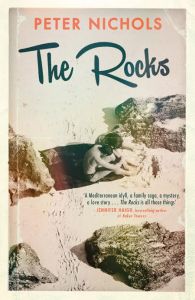 IN BRIEF: My View of The Rocks

This is a  sophisticated and ambitious novel but I’m going to keep my verdict simple:  it is one of the best books I’ve read in a long time.  It tells the story of two families through three generations’ worth of intriguing and complicated relationships and is all the more compelling for being told backwards from a very dramatic opening/ending.  This challenges both our expectations and the way we are programmed to read:  there are some frustrations to knowing nothing can happen in a forward motion that you haven’t already witnessed, (and my view of one of the protagonists never recovered from one repellent incident early on) but you don’t need to be a writer to appreciate the skill it takes to achieve such a smooth narrative flow in reverse.  I respect authors who give the reader some credit and the extra attention required to assemble the pieces of this mystery is amply rewarded, with satisfying echoes between sections.   The setting, the engaging cast of characters and the changes in morals and society over the decades are vividly painted and fascinating.  The Rocks has everything I look for in a work of fiction but rarely find between one set of covers.

Writer (novels: Paris Mon Amour 2017; Scent 2021).Host of the Literary Sofa blog. Co-founder of Resilience for Writers with Voula Tsoflias. Perfume lover and Francophile.
View all posts by Isabel Costello »
« Guest Author – Shelley Harris on Writing a hero from the inside
Dark Days Back Home »

13 thoughts on “Writers on Location – Peter Nichols on Mallorca”