Since starting the Literary Sofa blog in 2011, I read far more new fiction than I used to.  And despite the endless stream of fantastic novels which find their way to me, I often get the feeling there are established notions of ‘what works’ in fiction or ‘what the reader wants/expects’ – notions I personally like to see challenged.  So I was particularly intrigued to see what a debut author who happens to be a literary agent himself would come up with.  Add to that a connection with my home town of Salisbury in the form of the cathedral spire, and skyscrapers, which I love; it’s fair to say that my expectations were high!  But Alex Christofi had no trouble meeting them and he joins me today to discuss how an idea grew and grew… (my mini-review follows)

It was 2010 when I had the idea for my first novel, Glass. The recession had had time to trickle down to people of my standing, by then, and I was spending my Saturday taking a free stroll along the river, when I noticed a large concrete pillar poking up between all the glass buildings that squatted on the South Bank around the mayoral egg. This concrete pillar had a sign fixed to the top of it that said, THE SHARD, which didn’t seem like a particularly good name for what was essentially a blunt post. I took a photo of it on my phone, probably thinking I could get some mileage out of it on social media, and forgot about it.

The next day, I was again dodging the recession by lying on my bed. After I grew tired of looking out the window at the flats opposite, I began to look at the window itself. I hadn’t cleaned it, ever. In fact, I realised with a kind of dull horror, I’d never cleaned a single window in my life. Everywhere I went, windows must be quietly accruing dirt, rooms getting darker, more obscure.

In those days, I had a large mural across one of my walls, depicting a whole cityscape in silhouette. Looking at it made me think of that dirty pillar, the ‘Shard’. On googling it, I discovered that it was going to be the largest skyscraper in Europe, dubbed ‘a shard of glass through the heart of historic London’ by English Heritage as an insult and repurposed by the building’s developers as part of their branding.

These buildings were always started during a boom and completed during the bust, when their existence seemed like an insult. The Empire State Building had been completed during the Great Depression, with a mast designed for mooring rich people’s dirigibles. These great skyscrapers were the epitome of collaborative achievement, one of the great feats of the modern age, and yet their completion so often heralded divisive politics, with a swing towards the political right. It could be a fascinating setting for a story, I thought.

There were already a couple of great skyscraper stories: there was William Golding’s novel The Spire, about the building of the famous cathedral spire at Salisbury, and then there was the story of Babel, that ur-skyscraper (lol) after which all are modelled. It is a stranger story than most people seem to realise, raising more questions than it answers about God’s intervention in human affairs. God comes to see the tower; he realises that the people is one, that they have one language and they can do anything they imagine; he decides to scatter them and confound their language so they can’t understand one another. To me, it’s a story about how easily we might overcome our limitations if we were to act as a single body. The God depicted in the story seems fearful of human capability, and the scattering of humanity into rival factions who cannot understand one another is not righteous but melancholy. (It is like Aristophanes’ story, in The Symposium, in which the gods decide to split eight-limbed humans in half because they are too powerful – the reason, he says, why we spend our lives searching for our other half.)

Skyscrapers seemed to carry all this freight of interesting oppositions: corporate and personal, boom and bust, collaboration and divisiveness. And here was a skyscraper being completed in the heart of contemporary London, its design already iconic, not nestled among other skyscrapers but jutting improbably out of the low lying markets of Borough. 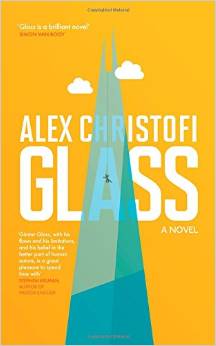 I built my novel over the next couple of years, watching the Shard grow and take shape before my eyes. The novel is set around the inauguration of the building in the spring of 2012, but at the time, I was writing into the near future, and that race with the building itself compelled me on to keep writing, to get my concrete in place, to clad it in glass and, finally, to assemble and perch the great spire – in my case, the climactic final scene, which takes place 70 floors up, dangling off a window cleaner’s cradle, with all of London spread out below. The hero of my book is a window cleaner, his mission modest but important: to confront the dirt and darkness, to seek clarity, to seek the light.

Thanks to Alex for this great piece.  It’s always fascinating to hear where the idea for a novel originated.

IN BRIEF: My View of GLASS

In Günter Glass, Alex Christofi has created a real ‘character’ – one whose own complex blend of traits mirror the qualities of the book as a whole:  he is both innocent and (for a 22-year-old) astonishingly wise, and for a novel  that is so unusual, intelligent and at times overtly philosophical it is remarkably entertaining and free of pretension.  It frequently made me laugh out loud yet it brought me close to tears more than once.  I would have had to throw most books aside in the kind of crisis that erupted in my life halfway through reading this book, but it still spoke to me and I think that says a lot.  There are certain drawbacks to the way Glass is narrated (which I can’t elaborate without doing the same myself) but overall this is a fresh and original work from a voice that masters heights and depth with equal assurance.

Yesterday I had the pleasure of being Kim Forrester’s Triple Choice Tuesday guest on her excellent blog, Reading Matters, talking about three memorable books.

Next week’s guest here will be Claire Fuller, author of stunning debut novel Our Endless Numbered Days, one of my Fiction Hot Picks 2015.

10 thoughts on “Guest Author – Alex Christofi on Writing the Shard”