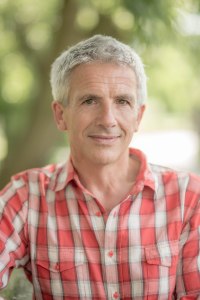 It is a huge pleasure to welcome prolific bestselling author Patrick Gale to the Literary Sofa today.  Patrick’s long and successful literary career had an unusual beginning back in 1986 when his first two novels were published on the same day.  He has since written over a dozen more as well as two short story collections and a biography of Armistead Maupin.  His 2007 novel Notes from an Exhibition sticks in my mind not only because I loved it but as one of the very rare novels enjoyed by everyone in my long-running book group.  Patrick’s latest novel A Place called Winter marks a change in period and style and here he shares the real life family mystery behind the story (my mini-review follows):

Nearly two decades ago I wrote a magazine article about London psychics. One medium I visited, quite anonymously, was so spectacular that I had no trouble writing down almost everything she said within minutes of my leaving her flat in Chelsea. Much of it was kind, caring stuff – passed on by my dead brother, she said – about caring for our father, keeping our mother off ladders, apologising for the mess he left behind him and so on. Some of it was predictions which have since become true – that the man I was seeing at the time was not The One (I could have told the spirits that for nothing) and that I would shortly meet the man I would grow old with, who would live in a lovely old house with land running down to the sea. But then there was a detail so left-field it jumped out at me. The medium said my maternal grandfather had joined my brother and was saying I should look into the family black sheep because good things would come of it.

We don’t have a black sheep. Not really. My father’s family was painfully respectable – landowners and, latterly, priests –  as was my mother’s, give or take a streak of alcoholism and a taste for sex. I knew of a great-great aunt who had escaped her home for the alcoholic elderly and been caught trying to auction a crab on Eastbourne sea front to buy gin and of another one, again on my mother’s side, who, in a family crime worthy of the house of Augustus, had married her unknowing daughter off to her lover so as to enjoy easier access to him. But neither of these struck me as black sheep in that they’d not been cast out.

But then, when my mother moved herself into a home, I inherited a beautiful chest of drawers which turned out to be stuffed with letters, both those she had written her mother and those her mother had written back, up to three times a week, every week, from the day my mother married until my grandmother’s death some thirty-five years later. A novelist’s treasure trove. And there, amidst it all, was an innocuous little school folder from the 1970s in which Granny had been encouraged to start writing her memoirs to stave off the dementia which soon overwhelmed her.

It was a sad story. My great-grandfather, Harry Cane, and his brother married into a big, apparently prosperous family of London lawyers. Harry’s wife, however, was in love with someone else, who her brothers had forbidden her to marry as his money was too nakedly commercial where Harry’s was inherited. The couple managed at first, they set up house beside the sea and had my granny, but then something went wrong and quite suddenly he was off to take up the offer of free land in the newly “opened” Canadian prairies. No question of wife or child following on. His wife’s old admirer is briefly allowed back onto the scene but then she dies of breast cancer. Still no question of my grandmother joining her father. Instead she was raised by a tribe of aunts and uncles, always with a slight cloud of pity or disapproval over her head.

Even within the memoir her explanations vary and lack the confidence of known truth. On one page he is said to have lost his money, on another, to have been a bit of a rogue, on another, least believable of a man raised as a gentleman about town, to have always yearned for the life of a farmer. So there, very quietly, in the man I finally realised was the same – I thought mythical – figure my big brothers had sometimes referred to as Cowboy Grandpa – was my black sheep.

At first I set out simply to tell his story, only joining dots with fiction where there was not enough fact to sustain the narrative. But then I soon found I was projecting myself into the little I knew of his personality, into the sensitive looking face that shone out from the two surviving photographs of him as a young man. And quite suddenly he turned gay on me. Only, of course, he has no such word for it.

I had to honour the known facts. I promised that to his and my dead grandmother’s memory. But I also realised that, by making the greater part of his story one that would have been, literally, unspeakable, I could come up with a story that was emotionally satisfying and which might believably have been the case without any of it reaching his daughter beyond a faint whiff of disapproval when his name was mentioned. A whiff which might just have coloured her opinion of him.

For the saddest fact of all, so sad that I ended by revising my novel’s structure so as to leave it out, was that when he returned to England in 1953, having sold his farm and hoping she would take her long-lost father in, she let him stay only a couple of months before sending him back to Saskatchewan, where he died, apparently destitute and without family, three years later.

Thank you very much to Patrick for this fascinating insight into the story behind the book – such a sad ending!

IN BRIEF: My View of A Place Called Winter

This novel paints a very intimate portrait of a man on a broad canvas.  It bridges time and distance in the creation of a place where everything feels authentic: the landscape, the harshness of rural life and of the historical context,  the recognizable humanity of the characters, including a classic bad guy in Troels Munck.  And in Harry Cane, Patrick Gale has created a deeply empathetic protagonist whose story captivated me from beginning to end.  This is a slow burner and although the settler story readers will be expecting takes a good while to materialize, I was immersed in the earlier chapters of Harry’s life in Edwardian England and felt that added to my understanding of him as he grapples with physical and emotional challenges and the many forms love can take.  A heart-swelling tear-jerker.  His best so far.

Due to the fact there are SO MANY GOOD BOOKS coming out, there’s no chance of an Easter break for me.  Come back next week for a Writers on Location post about Switzerland by Jill Alexander Essbaum, author of HAUSFRAU.  It’s one of my Fiction Hot Picks 2015 and there are good reasons for that!

Novelist and short story writer based in London. Debut novel PARIS MON AMOUR now out in digital and audio, paperback on 22 May 2017. Host of the Literary Sofa blog.
View all posts by Isabel Costello »
« Writers on Location – Eve Makis on Cyprus
Writers on Location – Jill Alexander Essbaum on Zürich »