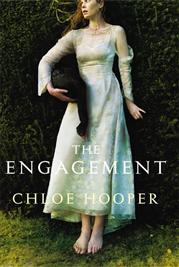 When compiling my two main listings of the year I always like to include fiction from different parts of the world.  The vivid sense of both urban and rural Australia in Chloe Hooper’s novel The Engagement  is one of many qualities which earned it a place in my Fiction Hot Picks for 2013.  Unlike most of the titles, this is not a debut.  The author’s first novel A Child’s Book of True Crime was shortlisted for the Orange Prize in 2002 and The Tall Man: Death and Life on Palm Island (2008), her non-fiction account of the death in custody of a man in an Aboriginal community off the NE coast of Australia, won her numerous literary awards there.

If the title The Engagement leads you to expect a love story, you’re in for a shock.  Romantic it isn’t and in fact there is very little of the predictable about this novel.  The first-person narrator is British architect Liese Campbell who has been working in her uncle’s real estate agency in Melbourne to escape the UK recession, showing clients around the kind of high-end apartments she once designed.  And in the case of wealthy landowner Alexander Colquhoun, she’s been throwing in a few extras, deliberately giving him the wrong impression about the kind of woman she is.   There’s a lot more to it than just sex – there’s money, there’s make-believe.

Sometimes we just talked about my made-up past.  I’d tell him stories about things I’d never done.

The story opens at the point where Liese has decided to leave Australia, with the prior history of her dealings with Alexander gradually being filled in.  He engages her to spend a long weekend at his remote cattle farm in the Victorian outback. This prolonged contact feels strange and unsettling to her, even before they arrive at one of the most creepy fictional houses I’ve come across:

The house had been built precisely so one would feel at its mercy.  Following him up the stone steps, I told myself, Do not react.  The front door was double regular size and trimmed in stained glass patterned with birds.  To the right of the door’s eaves was a swallow’s nest; a ribbon of shit trailed down the grey wall.  But next to it, in the glass, the jewelled birds perched on emerald boughs, garnet berries in their beaks, thinking, Maybe we won’t fly north after all.

An intelligent woman like Liese Campbell should have realised a weekend with Alexander Colquhoun could only bring trouble:

The risky game they’re playing changes from unsavoury to downright twisted with the switch of location and the deepening of Alexander’s obsession.  The element of fantasy is so central to their ‘relationship’ that it is even harder than usual to assess Liese’s reliability as a first person narrator.  She often seems emotionally detached, although this is consistent with her willingness to cross a line most people would baulk at.  I empathised with her often and worried for her a lot.  I didn’t find myself judging her.

Liese and Alexander are both complex and highly intriguing; frustratingly hard to decipher in terms of their motivation, the dynamics between them almost unbearably tense.  Start this book when you have time to give yourself over to it.  I had to abandon what I was doing for two days because it was messing with my head.   The suspense is heightened by the brilliant use of setting.  The decrepit mansion is so sinister and claustrophobic anyone would want to get away, but the surrounding bush is so vast and alien that Liese has no idea where she is.

The light had changed over the lake.  Rather than it being a study in purple, all Middle Earth mauves and indigos, it resembled a black and white photograph – the mountains and sky, and therefore the water, were different tones of grey.  This landscape was so full of morphing colours and noises that it occurred to me I was not actually seeing the place.  It was all disguise.

The fluency and elegance of Chloe Hooper’s writing really stands out and she has a gift for unflinching descriptions which are simultaneously repellent and beautiful, of which there are many in the book on matters as diverse as DIY butchery, cows giving birth and here, Liese’s impressions of a bathroom cabinet:

On the top shelf were the usual unisex things: scissors, antiseptic cream, an uncoiled bandage.   He’d need those if someone scratched or bit him.

The makeup on the bottom shelf was cheap. Covergirl  foundation the sick orange colour of rotten fruit congealed in a plastic tube.  A darker, mocha-hued face powder in a jar had been spilt and now covered everything else like ash. […] I reached in and picked out a lipstick, an old bright scarlet, then I picked a recent brand, marked ‘Island Dawn’, a light pink, only used once or twice.

Too many things remained ambiguous or unexplained in this novel, but there’s a lot to be said for its subtlety.  It raises a lot of interesting issues that go beyond the story.   I thought twice about drawing this parallel because they are absolutely not the same kind of book (or remotely in the same league) but if, like me, you normally read ‘upmarket fiction’ but were tempted to read Fifty Shades of Grey and found it wanting, The Engagement touches on some of the same themes in a provocative but intelligent way.

The Engagement has all the ingredients of a top psychological thriller with the bonus of literary style.  I think it could be a huge hit.  I hope so.  I really want to see the film…

7 thoughts on “Book Review – The Engagement by Chloe Hooper”