I’m very excited to be introducing a new regular slot on the Literary Sofa: WRITERS ON LOCATION, inspired by my own love of travel (and the way it, in turn, inspires me) and the many novels which have a particularly vivid, interesting or exotic sense of place. Naomi Wood’s novel Mrs Hemingway, one of my Fiction Hot Picks 2014, has no fewer than four beautifully drawn settings and I’m delighted that she has agreed to be my first Writer on Location, sharing her experience of Hemingway’s Havana in words and pictures. (My mini-review follows):

Researching Mrs. Hemingway has offered me an exotic travel itinerary. Each Hemingway couple (and there were four!) certainly knew how to choose the right place to live and write, drink and dance. Out of all the places I visited – from Paris to Antibes, Key West to Cuba – my favourite in the end has to be Havana, where Ernest spent so much of his time writing and partying in the 1940s and ’50s.

My friend Eve and I visited Cuba at the end of March in 2013: still snowing in London, and 30 degrees in Havana. That’s part of why I fell in love, I suppose, but there’s also so much than just heat and peso pizzas: there’s the classic cars, the deco buildings, the Romeos at every corner (no, I won’t be your girlfriend), the gentle hustlers (no, I don’t want a taxi to Cienfuegos) and then the sound, of course, of yet another Buena Vista Social Club song.

We were still a little jet-lagged when our taxi pulled up to La Finca Vigia, Hemingway’s house in San Francisco de Paola, just on the outskirts of Havana. As someone who had spent years researching Hemingway’s life and his work, to be in the house where he composed his words (the right words in the best order, with just the right amount of fat boiled off) suddenly made me crash out of my jet-lag. 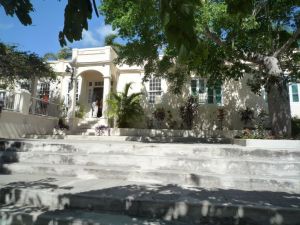 Now a museum, visitors can’t actually go inside La Finca but you can look in through the open windows. They say his things have been left relatively untouched here: Mary, his fourth wife, negotiated a deal with Castro after the revolution (indeed, Fidel came to the Finca and she very gently told him off for sitting in Ernest’s chair). After the Hemingways moved back to the US, Ernest’s manuscripts were shipped back in a shrimp boat. It was the last boat before the blockade.

And so there are still the kudu heads from their East African safaris, a pair of Ernest’s round spectacles still catching the light on his desk, his books on war, bullfighting, boxing, still shelved. There is still the pharmaceutical graffiti on the bathroom walls where, facing escalating health problems, Ernest marked his daily blood pressure.

The light in the house is lovely and yellow and the wind is warm and outside the house they serve sugar cane drinks with ice and – in homage to Papa – rum. And they give tours in English, which are actually in Spanish, where you can catch the words ‘Ava Gardner’ and ‘Gary Cooper’, who both came to stay at the house.

This is where Ernest lived with Martha Gellhorn and, in the hiatus of divorcing her and marrying his fourth wife, he renamed a maid ‘Martha’ rather dubiously in her honour. This is where his second wife, Pauline Pfeiffer, came in 1948, where she became friends with Mary over creepers and cocktails; both graduates, they said, of the ‘Hemingway University’. This is where Ernest wrote letters to his first wife, Hadley, expressing his love for ‘early and best Gods’ that had never gone away. Here is where words were lovingly exchanged; where arguments were spat, where plates were thrown – and without always the intention to miss. 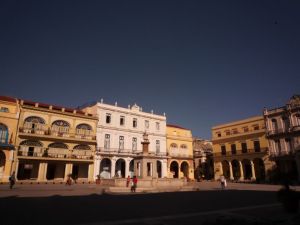 This is where the carousel of wives and mistresses turned, and turned again. And I would go back in a heartbeat.

Thank you to Naomi for this piece which demonstrates her ability to transport the reader so well and for sharing her beautiful photos.

In Brief: My View of Mrs Hemingway

Mrs Hemingway was a rare book for me: I was able to completely unplug my critical antenna and read it with pure enjoyment. The results of Naomi’s subject knowledge and on-site research are apparent throughout – she vividly evokes the ambience of Antibes, Paris, Key West and Cuba on a physical and social level. But even more importantly she captures the unique voice and personality of each of Hemingway’s four wives, bringing their complex relationships with him and each other to life in a way that is fascinating and deeply engaging. The stylish and elegant writing conveys the glamour and romance to perfection but also does justice to the pain and emotional turbulence of Hemingway and the women who loved him. This novel is the literary equivalent of champagne and cocktails (of which there are many within its pages): classy and intoxicating. It has all the ingredients for huge success.

*POSTSCRIPT*
No post next week – I’m combining a half-term trip to Paris with my sons with research for my new novel. Whilst there I’m planning to hit the bookshops and indulge in some reading for a future post on new French language fiction that’s also available in English.