*UPDATE – SEPTEMBER 2015: THIS REVIEW IS OF THE ORIGINAL TEXT – THE NOVEL IS NOW AVAILABLE IN ENGLISH, TRANSLATED BY LORIN STEIN* 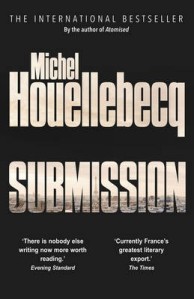 Reviewing a novel not yet available in English isn’t something I would normally do but the intense energy surrounding Michel Houellebecq’s Soumission (Submission) got the better of me when I was in Paris.  It was everywhere I turned and now I too have the urge to talk about it. Reactions have been mixed.  Like its author, this book has acquired a metanarrative which competes with what it is, or might be, trying to say.  Houellebecq is considered by some as France’s greatest living novelist; he is an enthusiastic courter of controversy, almost as famous for various provocative media soundbites as for his literary output.  And that goes some way to explaining why I’d never read him until last week:  I felt I’d heard it all already.

For anyone wanting further insight into Houellebecq and this novel before the English translation appears in September (a curiously long wait considering it is already available in German), this interview with Sylvain Bourmeau in the Paris Review is enlightening.  Given Houellebecq’s past pronouncements on Islam, it’s not surprising that Soumission – the premise of which is a near-future France ruled by the ‘Muslim Brotherhood’ – was widely expected to be islamophobic prior to publication.  By cruel coincidence, the book was released in France on 7 January 2015, the day of the Charlie Hebdo terrorist attacks; a close friend of the author was amongst the victims and he immediately withdrew from all promotional activity.  It became an instant bestseller in France and astonishingly, also reached the top of Foyle’s Fiction Chart here in the UK.

France has the largest Muslim population in Europe and Houellebecq is probably right in saying that the topic of islamisation could not loom much larger in the national consciousness than it already does, regardless of his contributions novelistic or otherwise.  Since the outcome of the 2022 presidential elections returning Mohammed Ben Abbes to power will be known to practically every reader in advance, the interest lies in how the economic, intellectual and social landscape of France changes in the wake of this victory.

Many readers will be surprised by the subtlety and restraint of the depiction that awaits them – a reason for not going into detail here.  Broadly, the new regime is a ‘soft’ version of Sharia based on family values, traditional morality and patriarchy.  Ben Abbes is a moderate, opposed to fundamentalism and acts of terror; he sees Islam as a kind of ‘new humanism’ with the potential to draw in those of other faiths, notably Catholicism.  (Atheists are more problematic.)  There seems little here that could be construed as islamophobic, possibly even the opposite.

But only a narrow reading could conclude that the main point of this novel is to take one position over another in relation to Islam or to make predictions about the future of France that are intended to be taken all that seriously, or at least not within the timeframe presented. Setting it only seven years from now detracts from the realism of the whole scenario (as acknowledged in the interview above) – if it ever came to pass, it would take a lot longer than that.  Houellebecq exploits the vision he has created as a means of subjecting contemporary French life to scrutiny, and the picture that emerges has a nihilistic and pessimistic feel.

That is due in large part to the author’s choice of mouthpiece.  Soumission has a single first person narrator, François, a professor of 19th century literature.  Apart from the author Huysmans, on whom he wrote his doctoral thesis, he shows little interest in his academic career other than as a reliable source of students half his age to sleep with.  He struggles to form meaningful relationships with women and is preoccupied by his waning sex life and the inevitability of physical decline even though he is only 44 (but seems much older.)  By his own admission he knows little about history or politics, unusually for someone of his background he has barely seen the rest of France, has few family ties and no social life.  His isolation prompts lengthy reflections on the futility of just about everything.  The man doesn’t even get on with his microwave.

Since a disengaged, unempathetic first person narrator is potentially problematic I was impressed by how cleverly Houellebecq converts this to a win.  François is often very funny in his cynical observations about academia and the incessant trials of everyday life and there is an entertaining – albeit often excruciating – vivacity to his encounters with others, drinking himself into a stupor in the process.  As the story progresses it is interesting to chart the link between François’ existential and professional dilemmas, for under the new government teaching at secondary and university level is a profession only open to Muslims – and to men.  Women conveniently disappear from public life and the workplace overnight to dedicate themselves to all things domestic and maternal.   And to pleasing men.

Houellebecq has said with no small degree of understatement that, ‘a feminist is not likely to love this book.’  Given the significantly greater implications of the events of the novel for women, the scarcity of female perspective is frustrating and presumably deliberate.  The attitude to women is generally derogatory:  an unattractive older woman is (wrongly) assumed to be a lesbian, and we veer between the predictably familiar territory of male fantasy (from short skirt, no underwear to two escort girls at a time) to images that are pornographic, offensive and what’s more, gratuitous, in that they do not involve the narrator nor do they have any bearing on the story.  There has been a lot of discussion of this novel but this angle has been underexplored so far.

It’s called Submission for a reason, of course, and that extends into every sphere: religious, philosophical, political, economic.  The play-off  between expediency and conviction, opportunism and integrity in personal decision-making is chilling but fascinating.  It’s a novel that bursts open under the weight of its ideas; it’s very literary and intellectual but not so dense as to be forbidding; it’s extremely franco-centric but has a universality which, like the expanded Roman Empire it hypothesises, reaches beyond borders where they currently stand.

Writer (novels: Paris Mon Amour 2017; Scent 2021).Host of the Literary Sofa blog. Co-founder of Resilience for Writers with Voula Tsoflias. Perfume lover and Francophile.
View all posts by Isabel Costello »
« Paris Before and After
Writers on Location – Melanie Finn on Tanzania »