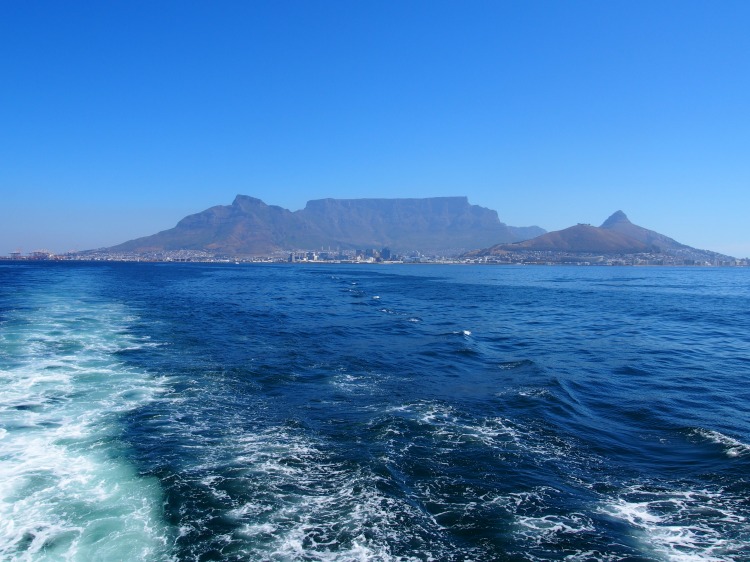 It’s two years since I last wrote a travel piece that’s not book related, and since real life kicked in immediately following our Christmas trip, it’s taken a couple of weeks to get round to this one.  I find myself saying ‘it already seems quite distant’ and yet, like any trip I’ve ever made, I can summon it back in an instant.  They say travel broadens the mind, and I’ve been extremely fortunate to do a lot of it, but it does something else: it stays with you and changes your perspective on everything, or at least that’s what I’ve found. It’s as much of a passion and inspiration for me as really good books and they have a similar effect! 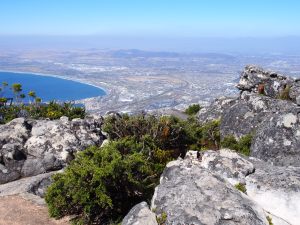 This two-week trip was a fairly relaxing meander round the Western Cape, centring on Cape Town.  Everywhere we went was within a few hours’ drive of the city but we did a loop, staying in Cape Town (City Bowl), Stellenbosch in the Winelands, Hermanus on the coast, Swellendam inland near the Langeberg mountain range, then finally Jacobs’s Bay, near the West Coast National Park north of Cape Town, the only area we hadn’t visited before.  On our first trip to the Western Cape 16 years ago our eldest son was only two years old so this was a very different experience – even in familiar places we mostly did new things. 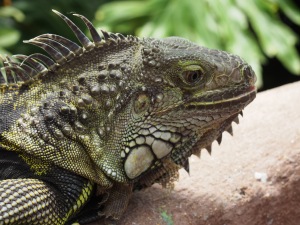 There’s no doubt that South Africa is one of our favourite destinations.  It is staggeringly beautiful, the people are very friendly and hospitable and it has an astonishing multi-cultural richness.  It would be impossible to come here without some awareness of the country’s complex and troubled history – I say that as a British person, so not in any position to judge – but now the toddler who accompanied us on that first trip is an International Relations undergrad obsessed with (pan-)African politics, we became more interested in this dimension and got more out of it as a result. 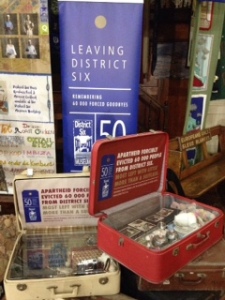 You could spend a week in Cape Town just visiting all the museums – we only had four days, and since it always feels miraculous to get off a plane and find it’s summer, most of our trip was spent outdoors in very pleasant temperatures of around 28C.  By sheer luck, on the day we’d booked to go to Robben Island (you have to book ages in advance) conditions were absolutely perfect with a cloudless sky.  It feels wrong to say that the hour-long boat ride was the best part, but the views of Table Mountain and seeing several whales on both sides really made it.  Due to an inexperienced guide, a group of disruptive tourists with no English and not getting the personal testimony of an ex-political prisoner, the visit itself was rather disappointing.  The part I found most moving was hearing about Robert Sodukwe, who was considered such a powerful and influential orator that he was kept in the strictest solitary confinement for years and not allowed to speak to anyone, to the point that his vocal chords atrophied.  Before that, he used to sing to the flowers outside his hut.

A visit I’ve found heartbreaking and enraging both times is the District Six Museum, which chronicles the forced clearance of this once-vibrant multi-ethnic area 50 years ago under apartheid, breaking up a close-knit community and exiling residents to townships on the Cape Flats.  This place does a great job of revealing the personal stories and the human cost.  We met two men who experienced it as children and I could understand why it matters to keep their memories alive. 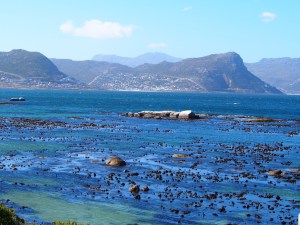 Cape Town is one of the most panoramically situated cities in the world and the one thing that’s unmissable is going up Table Mountain on the revolving cable car – the views in all directions are breath-taking. Back at sea level, we enjoyed our long walk along the beautiful boardwalk that passes through Green Point (just beyond the touristy V&A Waterfront) and Sea Point so much that we did it again on our last day. 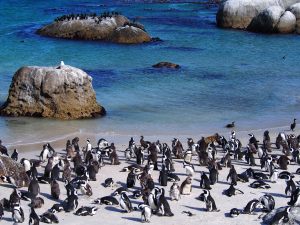 Once we’d picked up a car, we were able to explore the whole Peninsula, which made for a fabulous day of dramatic scenery, through the desirable beach suburbs of Hout Bay and Camps Bay, along Chapman’s Peak, considered one of the most spectacular marine drives anywhere, and down to Cape Point. It was mid afternoon before we got to eat our fish and chips at Simons Town looking across False Bay to the resort of Muizenberg with its 20km long white sand beach.  But the best bit was Boulders Beach, home to a large colony of African penguins (formerly known as ‘jackass penguins’ – they’ve had a rebrand since we were last here). 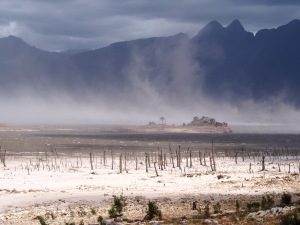 The most memorable excursion during our time staying in Stellenbosch was driving over the Franschhoek pass and witnessing a strange and eerie duststorm in the Hottentots Holland Nature Reserve – it was just completely different to anything else we saw on the trip.  Since the boys have no interest in wine and it doesn’t combine with driving anyway, the only winery we visited was Fairview, which has a quirky goat tower and a very nice restaurant. 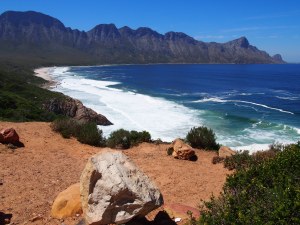 In fact, food is one of the big draws of the Western Cape, more so than the other parts of SA we’ve visited.  Like the landscape, much of it has a Mediterranean feel with lots of delicious fish, seafood, fruit and vegetables.  (I get very excited about ripe ‘avos’…)  The quality is usually fantastic even in simple places, and the prices unbelievably cheap by UK standards.  Unfortunately neither of these were true of our long anticipated Christmas lunch by the sea in the whale-watching town of Hermanus, but at least we had good views during the excruciatingly long wait.  The day was redeemed by the drive round Gordon’s Bay to get there – I’ve never seen a deeper blue! – and a long walk along the Hermanus Cliff Path. 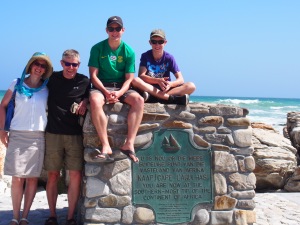 The next day, after getting lost several times and finding that what we thought were paved roads were actually unsurfaced, we made it to Cape Agulhas, which is actually the southernmost tip of Africa and site of many shipwrecks in times past.  It is less scenic and accessible than the more famous Cape of Good Hope but still worth seeing.  I made it ¾ of the way up the lighthouse – the first three flights were bad enough but one look at the long ladder up to the top and I admitted defeat. (It was coming the thought of coming back down that worried me.)  There was a little museum dedicated to all of South Africa’s lighthouses.  Something about them fascinates me, maybe because they’ve become obsolete.  A real-life California lighthouse features in my novel!

When planning this trip I particularly wanted to return to the small town of Swellendam, a popular stopover for those driving the Garden Route between Cape Town and George, as we did in 2000.  Back then we were only here for one night, but the beauty of the place made a big impression on me.  This time we did have a day to do a hike.  I don’t think the ranger quite understood my meaning when I asked for a ‘medium route’.  In practice this was a very challenging circuit halfway up a serious mountain that somehow managed to include lots of uphill on the way down.  It almost killed me and I had an excessive number of breaks to ‘look at the scenery’.  In some ways it’s a bad idea doing this kind of thing with three absurdly fit people, but I was very grateful to them all for the moral support.  When we finally came down and I could see where we’d been, I retrospectively enjoyed it very much… 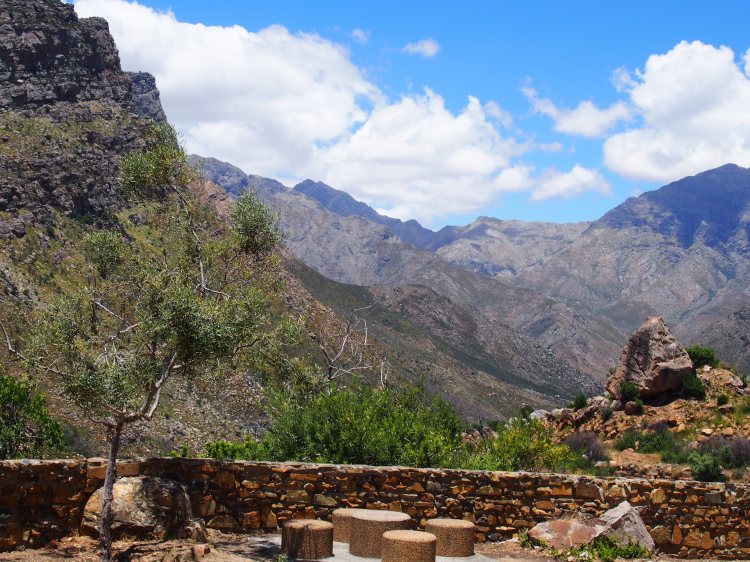 We wanted to end the trip with somewhere new to all of us – the West Coast north of Cape Town was a great choice and a bit off the main circuit for overseas visitors.  We stayed in the village of Jacob’s Bay, which has lots of beautiful white houses and nothing in the way of commercial activity (apart from guesthouses).  The locals are very keen to keep it that way and I can see why – it was blissfully unspoilt even in peak season and reminded us of Brittany or Cornwall only with much better weather.  We had this (relatively) small local beach practically to ourselves every time we went but before you get too envious, the water was absolutely freezing.  Too cold to paddle!  At the nearby lagoon in Langebaan the water must be much warmer, judging by the crowds and the watersports scene. 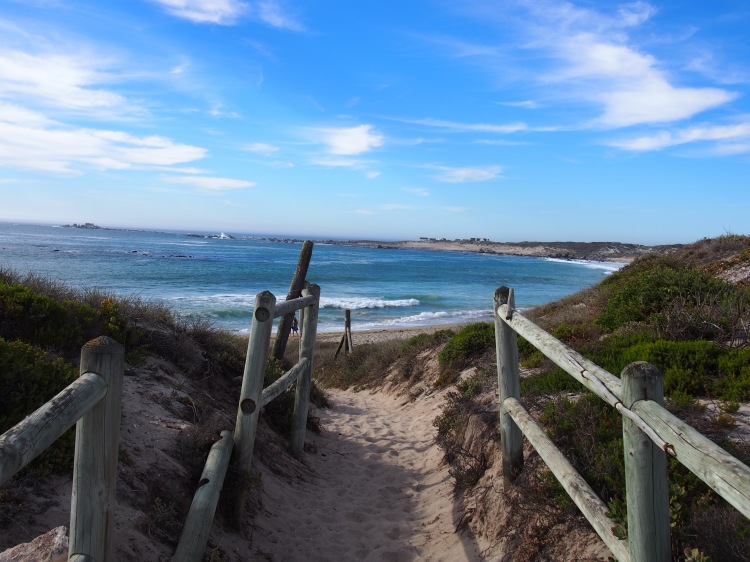 So much has changed in the last sixteen years and this return to the Cape really made me think about how life flashes past.  It’s hard to pick the best bit on a trip as lovely as this but maybe that’s because it wasn’t any one place or thing we did, it was simply being together. I know that sounds cheesy, but it’s true.

If you enjoyed this piece, you might be interested in my 2012 piece on KwaZulu Natal and Mpumalanga (Battlefields, Drakensberg, Indian Ocean coastline, Kruger National Park)

If you’re in London between now and 28 February, I really recommend the exhibition Art of a Nation at the British Museum which makes very interesting connections between South Africa’s history and art.

Next week I look forward to welcoming my first Sofa guest of 2017, Essie Fox sharing  her experience of writing an elderly protagonist in The Last Days of Leda Grey, one of my Winter Sofa Spotlight picks. 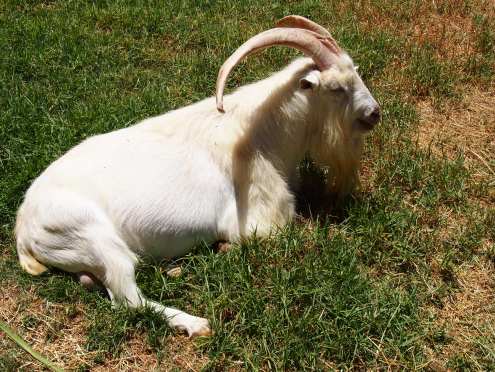 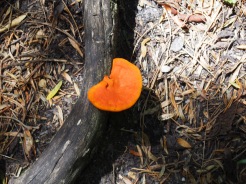 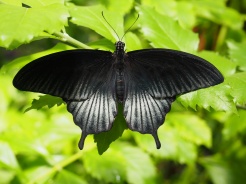 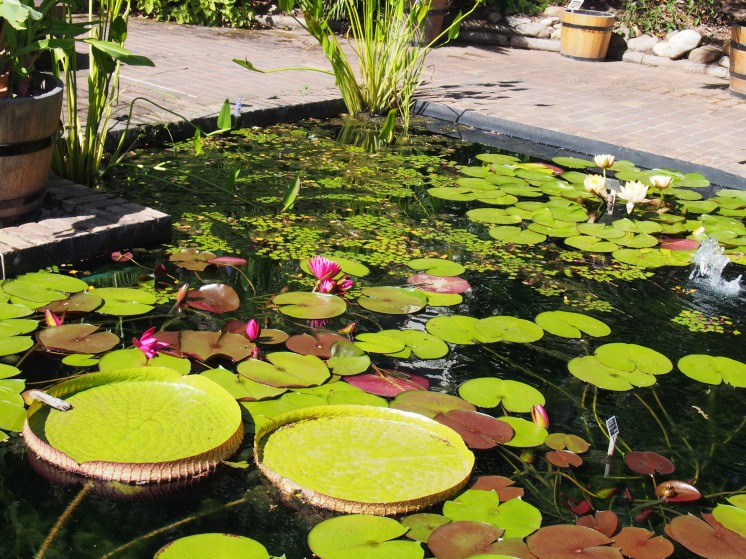 8 thoughts on “Two weeks in the Western Cape, South Africa”